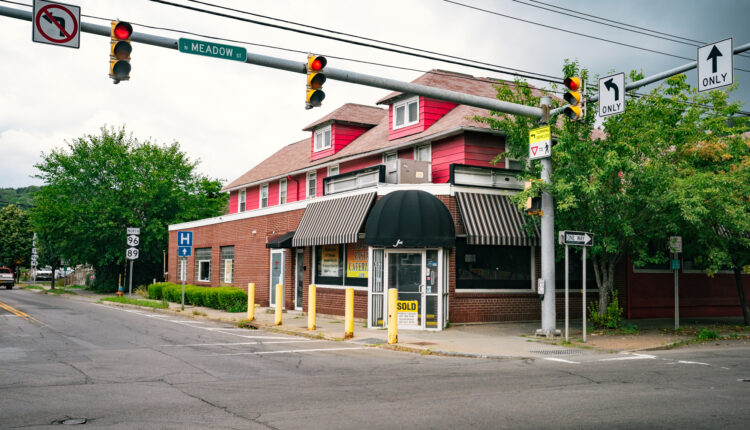 ITHACA, NY—Let’s follow up on something. Back in December, Visum Vice-President of Development Patrick Braga provided this quote to the Voice:

“We’re planning on approximately 110 bedrooms of middle-income/workforce housing on the site of the former Joe’s Italian Restaurant at 602 West Buffalo in the West End. We’re also working on market-rate apartment projects at two different locations in the city: 77 apartments on one site and 131 on the other. In Collegetown, we’re contributing another 27 or so beds of student housing on an infill site in the neighborhood.”

In the months since, “The Breeze” at 121-25 Lake Street was introduced, with 77 apartments. “The Hive,” at 132 Cherry Street, has continued to move forward, with about 131 units. Last month, they introduced their Collegetown proposal, “The Gem,” which had 26 beds. That leaves one unnamed project, the one with 110 bedrooms for 602 West Buffalo Street.

That is, until now. Meet “The Citizen.”

It’s worth noting that the bedroom count is tweaked slightly from the December statement, which is not unusual for concept plans. The five-story, 52′ tall, roughly 80,000 square-foot building is proposed to contain 80 apartments with 20 studios, 40 one-bedroom units, and 20 two-bedroom units — 100 bedrooms total, 10 less than initially envisioned. The project will also host a 2,560 square-foot retail footprint on the corner of West Buffalo and North Meadow Streets. The residential lobby and amenities would be accessed from a separate entrance on West Buffalo Street, and a small landscaped area would be planted in the rear end (north) of the property.

The former Joe’s Restaurant would be taken down to make way for the proposal — in the filing, Steve Hugo of HOLT Architects states that the building will be dissembled and parts salvaged for resale “as is practical.” Hugo’s colleague Tom Kinslow is listed as the architect in charge of the project, for which building elevations show as an unfussy, modern design. The first floor would have 29 covered parking spaces, the amenity/lobby and retail space, and the apartments would be on the upper four floors. The color palette and architectural details still need to be hashed out over the coming months.

As proposed, “The Citizen” is fully compliant with the WEDZ-1a (West End Development Zone) zoning. The zoning is designed for an urban-friendly mixed-use project up to five floors, no required parking and 90% lot coverage, and this submission fits the bill at five floors and 75% lot coverage. The project about the new five-story West End Heights project that was completed earlier this year.

The project clocks in with an estimated price tag of $14.8 million. Construction is intended to take place starting in January 2023, and wrap up in April 2024.

Because of Texas Abortion Law, Her Wanted Pregnancy Became a Medical Nightmare

Millions of Americans See Cause To Celebrate Never Give Up Day