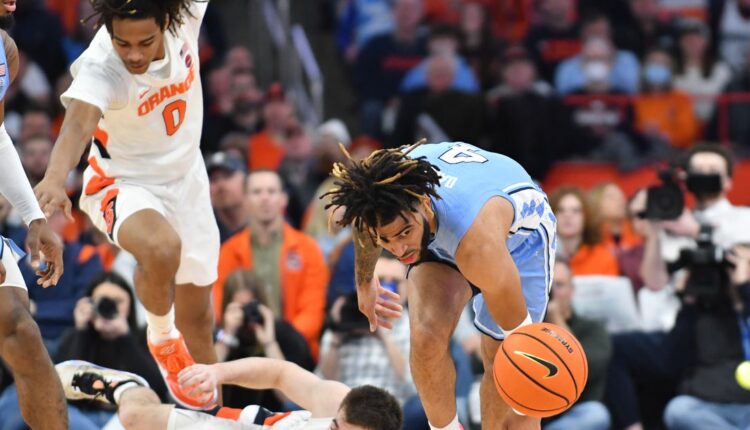 Wow, I hated that.

The UNC Tar Heels’ foray into the arena, formerly known as the Carrier Dome, felt closer than it should have been for its duration, but although the Heels lost their 38-minute lead too late, Pete Nance took a loose one ball from his own missed free-kick throw and scored UNC’s only second-chance points of the game to finally put his team ahead as they would eventually win 72-68. With a long 8-day gap between this game and the Heels’ next, let’s reflect on some of the things I think we can take away from the Heels’ win over Syracuse:

In his first two years as head coach, perhaps just to ease himself into coaching, or perhaps as an actual choice, Hubert Davis didn’t plan the same kind of non-conference board that Roy Williams was known for — last year’s The Non- The conference schedule featured only a single independently scheduled College of Charleston road game, and this year’s had none. That was partly because UNC had just a single away win in Portland on Tuesday night, and some of the losses were ugly. So my primary reaction to this game isn’t really related to the game itself, but rather that seeing this team achieve their first away win in the conference is just a burden off our collective back. The environment was hostile, the home cooking was strong for about 7/8 of the game and the hosts upped their game from what they’d been doing all season, but the Heels made enough mini-runs to keep the Orange at a distance most of the game, and while they couldn’t really take out all of their opponents, they found ways to get stops when they needed it and ultimately not put themselves in losing positions. They played with composure and fought their way through many and many different types of adversity including elbows to the face, a couple of hard shots that went through good defense and a fairly tight pressing towards the end of the game. Coping with that and coming out with the win has to give this team something they haven’t had before, with a trip to Durham on the horizon.

I think we got a solid sense of how Hubert Davis will be using his bench this year — rather than changing players or groups of players, he seems to prefer using his substitutes to attack matchups on the other end of the ground. If they have a thin or suspect backcourt, Seth Trimble and D’Marco Dunn will see more time. If Davis thinks he’ll win a game by batting for the basket, we’ll see more from Puff Johnson and Jalen Washington. He can call in Dunn, Johnson and/or Nickel when he needs to shoot, and Trimble is his go-to for increased perimeter defensive pressure. Unfortunately, Johnson has missed the last few games with a sore knee, which has shaken some of those things. Davis was clearly determined to play two bigs so he could beat the zone by playing high-low in the post the way some of UNC’s funniest wins against Syracuse have come off, but the roster really only has one player other than Starter Pete Nance, who can play the 4 for longer minutes, and that’s Johnson (Dontrez Styles seems to be able to, too, but clearly hasn’t earned Davis’ trust this year). They also want shooters against a zone, if only to disperse it, and Johnson, while not always a reliable shooter, definitely has the seriousness required to shoot.

Without him, the bank usage in this game was a bit strange. Pete Nance played the entire 40 minutes as the only big who could play high and low post, and some of the lineups Davis put up had two or more non-shooters on the perimeter, nullifying the Syracuse Zone’s outside threat. Something like Trimble/RJ Davis/Leaky Black/Nance/Washington is a good lineup in general and probably has more efficiency for the year for the heels, but if you play your bench by matchup, that may not be your way of thinking about it after who you put out there. Hopefully Johnson will be back soon, but if that knee bothers him any longer Hubert Davis will have to do a mini-reset of how he envisions his bench players on the pitch. This could include more small ball with Tyler Nickel, who is of some size and played a useful 12 minutes – hitting a three, had a highlight reel chasedown block, played solid defense and led the team in +/- .

Look, I know it’s not a dead horse to talk about the state of college basketball officiating this year, but last night’s game was just outrageous. Caleb Love had two charges against him early on — the first could have been legitimate, the second was purely of the “run in front of someone and fall” type that was set to attract a technician this season. Shortly after, Joe Girard trailed his pivot foot about a yard before passing behind him for a three-pointer that went in. RJ Davis was nicked and then stumbled on a fast break run out attempt and nothing was called, resulting in a turnover. On his next fast break attempt, Girard grabbed his foot from behind, and while a foul was called, it wasn’t even considered overt since it wasn’t a basketball game at all. And those were just the obvious things in the first half – it sure looked like there were a lot of uncalled contacts at the post against Armando Bacot, but we’re not close enough to that action to see it so maybe that was correctly named. Then it was awful in a whole different way in the second half where fouls were called at both ends that hadn’t been called in the first plus some stupid stuff like Bacot being blatantly and obviously pushed wide right in front of the goal Referee charged with turnover and a few calls made to UNC including a drawn charge from Davis. I’m a UNC fan, so these are the things that stand out to me. A Syracuse fan might instead point to the 23-3 free-throw imbalance favored by UNC (though I’m not sure a vaulting team can really claim that) and the questionable end-of-game foul on Caleb Love’s defender on an inbounds -Game. Whatever your perspective, no one is happy with the way this game was managed and it turned what was quite a thrilling game into an absolute slog at the end with no one sure how to play against the officials and plenty of pivotal moments left are left to fate.

First and foremost, I think broadcasts need to be more accountable for these moments. There were many clearly questionable moments that were not repeated or even mentioned a second time by team Rece Davis and Debbie Antonelli, including Love’s two counts, Bacot being pushed off, Davis fouled on a substitution, Girard’s wide margin, and himself the foul on love at the end that turned a 2 point game into a 4 point game got nothing more than a single replay from the worst angle to get anything definite. I feel like we’ve definitely gotten more replays of these types of things in the past, and it’s not like the pace of college basketball is faster when you don’t have them. I beg the broadcast crews, for the sake of the game, make an effort to clarify what’s being called — either so we stop whining, or so the bad things become so obvious that something needs to be done.