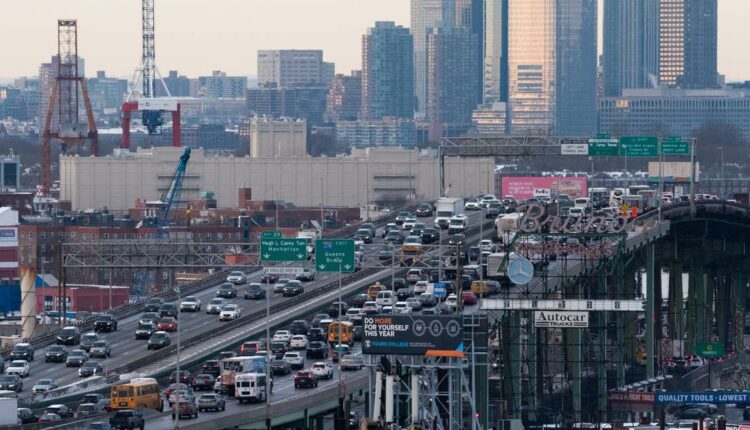 New York City plans to spend more than $10 billion on a project that will accelerate climate change and increase the number of New Yorkers killed by traffic and pollution. The good news is that the city will hold meetings to allow the public to comment on the plan to rebuild the Brooklyn-Queens Expressway (BQE). The New York City Department of Transportation has commissioned three plans for discussion: the designs are good, but the concept is wrong. Now is the time to say so. Future public meetings are listed at https://bqevision.com/events.

Because of the way we drive everywhere for everything, Americans have been the biggest contributor to climate change. Here in New York, where most of us don’t own cars, the city pledged in 2005 to reduce greenhouse gas (GHG) emissions by 30% by 2025, a goal the city will not meet. The city has also committed to reducing greenhouse gas emissions from transport by 70% by 2005 by 2050. At our current rate of progress, it is unlikely that we will do so.

Rebuilding BQE is making it harder to meet environmental targets, while the UN’s latest report says the world is moving too slowly to avoid catastrophic climate change. Maintaining the status quo for highways and motoring will be disastrous for the future.

The history of congestion charging in New York shows how slowly we move to reduce traffic. The city tried to introduce congestion charges for cars in Manhattan in 2007. We’re supposed to get a watered-down version in late 2023. Fifteen years have passed, and one of Mayor Adams’ chief advisers still calls congestion charges “stupid.”

Keeping traffic flowing around the outskirts and into Manhattan (despite the state and city’s official goal to reduce the number of cars in Manhattan) is just one of the reasons New York City wants to rebuild the BQE. Whenever someone suggests demolishing the derelict highway, the ‘smart money’ says we need the BQE for truck deliveries. Trucks on the BQE move more than 90% of cargo in Brooklyn and Queens.

Why this is so dates back to the 1960s, when the country switched to a “just-in-time” delivery system using 53-foot containers suitable for sea, rail, and truck freight. Back then, gas was 27 cents a gallon, and nobody was talking about climate change or post-COVID supply chain issues. But now we know that having those huge trucks driving through the city sucks.

If we want a better planet, we need a 21st century solution. Let’s invest some of the $10 billion in a sustainable cargo delivery system to replace the carbon-polting plan we have now. While we’re at it, we’re making it a just-in-case system with depots and warehouses that are less dependent on an efficient global supply chain.

Where should we invest? First, we need to look at so-called “last mile deliveries” – how goods get to stores, offices and homes. Small electric trucks are ideal for this. They fit into city traffic, do not pollute city streets, are quieter and pollute less. Large private delivery services such as Amazon, UPS and FedEx are already using them.

Cargo bikes are even better for the environment. New Yorkers are getting used to seeing them on city streets because Amazon-owned Whole Foods is using cargo bikes and some private contractors have sprung up. In the words of former President Donald J. Trump, they create “jobs, jobs, jobs.” And like the electric trucks, they can deliver from warehouses and other depots that improve the supply chain by storing inventory in and around the city. The fastest growing land use in New Jersey is for distribution centers and warehouse complexes. In recent years, Amazon’s New Jersey workforce has grown from 5,000 to 55,000.

If the big container trucks that ship to New York went to public depots on the outskirts of the city, we could get the big trucks off the city streets. The big diesel trucks do six miles per gallon under normal conditions and three miles per gallon in stop-and-go traffic. And funding and owning the trucks means they’re going to be polluting for a long time to come.

Nationwide, large pickup trucks account for 10% of all miles driven on our freeways, but 33% of greenhouse gas emissions. An even better system would encourage more rail shipments. It’s a little-known fact that America ships more by rail than Europe, where trucks dominate. But European cities don’t allow big articulated lorries into city centers. In theory, New York City also bans trucks longer than 53 feet from most city streets. In reality, we see bigger trucks all over New York. They are dangerous, noisy and a major contributor to unhealthy air.

We have little rail freight traffic in New York because the nearest Hudson crossing for freight trains is south of Albany. New York City, Long Island, Westchester County and southern New England all suffer from rail freight shortages. All of the freight trucks going through New York on the Cross Bronx “Expressway” going anywhere else cause terrible congestion and heavy pollution (as do the trucks on the BQE).

According to a study by the New York City Economic Development Corp. the proposed tunnel had a cost-benefit ratio of 2.2 to 1. They estimated an NPV well in excess of the cost of rebuilding the BQE.

Traffic on the BQE (Shutterstock)

There are many problems tearing down the BQE and moving New York to a greener cargo delivery system. One is what needs to be done during the transition period: removing cars from the BQE while still allowing truck traffic would extend the life of the highway and give some time to introduce a new system.

Cars could drive on “right-size” boulevards, which is what we built in America before we built inner-city freeways. Experience shows that eliminating the freeway would reduce inner-city traffic, which is our declared goal.

It’s worth noting that the city already has a single shipping container center in Red Hook (the Port Authority moved the rest to New Jersey). One possibility is for trucks to exit the BQE at Red Hook, where a depot could serve for both trucking and shipping (and rail in the future).

The removal of the BQE could open up large areas of valuable city-owned land for parks and affordable housing. That’s another story I wrote about in the Daily News with former Milwaukee Mayor John Norquist (“A Highway That Hurts NYC,” commentary, November 25, 2019). But first we must move beyond plans to spend billions of dollars to rebuild the BQE. If we rebuild the old-fashioned Autobahn, we’ll be stuck with it for decades. Nearly 30 cities across the country are removing intercity freeways, including Syracuse, Rochester, Detroit, Chattanooga, Dallas and New Orleans.

I understand that if we remove the BQE, problems will follow. I know that changing New York City’s delivery system won’t be easy. But if we care about life in the city and our children’s future, we should oppose rebuilding the BQE and use the money to build a more sustainable future.

The work will be expensive, but we’re about to apply for billions of dollars in federal funding. And we never talked about not having enough money to build the Interstate Highway System, the most expensive infrastructure project in the history of the world. We have more money now than we did then. It’s time to tear down Interstate 278, aka BQE.

Massengale, an architect, is the author of Street Design: The Secret to Great Cities and Towns. He is writing a second edition with a new chapter documenting the best new Slow Streets and Slow Zones in European cities.

What is the #3 patch on Bill’s jerseys? Buffalo honors teammate during playoff run

Affordable housing is the focus of the East End Forum