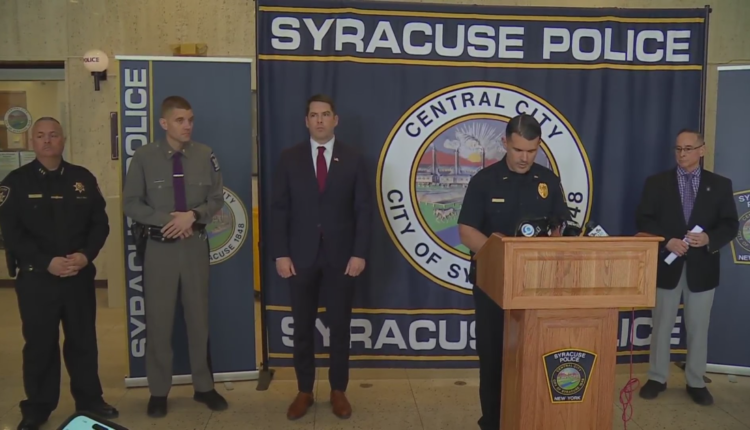 The mayor’s office and other law enforcement agencies were also present to discuss the subsequent police response to the killing.

The news conference comes after a shooting last night on Oakwood Avenue in the East Raynor Avenue and Martin Luther King, East area where an 11-year-old girl was killed in a drive-by shooting.

The girl was walking home with a gallon of milk for her family from a nearby corner shop when she was shot in the midsection, according to Syracuse Police Chief Cecile.

A 19-year-old who Chief Cecile speculated was the target of the shooting was also shot in the leg and is currently in stable condition at Upstate Hospital.

Syracuse police also have not confirmed why the 19-year-old was shot, but they have answered detectives’ questions.

The Syracuse Police Department gave an update that they know what the suspect’s vehicle looks like and how many people were in the car thanks to surveillance footage from the area. They’re still looking for the suspect.

Syracuse Mayor Ben Walsh mentioned that while other law enforcement agencies and the New York State Police were not at the scene last night, they are helping Syracuse Police with this investigation.

“What we saw last night hit a nerve and affected us all in a way other crimes don’t. Just because they weren’t at the last press conference doesn’t mean they don’t support us. Your presence here today is a sign of mutual interest.”

Chief Cecile is asking community members to come forward with tips that can help solve this crime and hold those responsible accountable.

“The problems we face are not urban problems, they are societal problems. We must come together and recognize that this is not normal and should not be tolerated,” Mayor Walsh said.