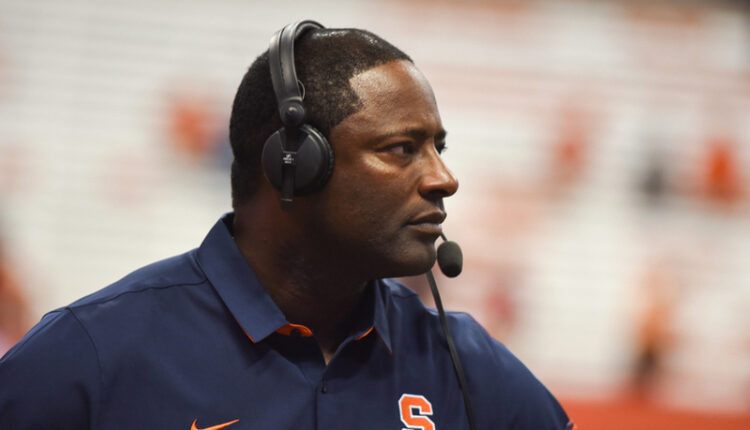 We’re now just under a month away from Syracuse football’s 2022 season opener against Louisville. There’s plenty on the line for both the Orange and head coach Dino Babers this year, and we at the Fizz are currently working on some season predictions.

For now, it’s worth taking a look over Syracuse’s schedule just as we did around this time last year and figuring out which games ‘Cuse really needs to score. The ’22 squad isn’t riding the gloom of a 1-10 year into September like last year’s group was, but the Orange may have to win some key matchups to avoid replicating last season’s 5-7 mark – or worse. We’ve ranked the top five games this year’s team needs to win for a legitimate chance at a bowl.

When talking about SU football’s schedule, the early-season matchup with Purdue falls into uncomfortable territory. Its placement in the schedule (immediately after a layup game with UConn and directly preceding a clash with Virginia that’s rich with storylines) doesn’t do it any favors. Neither does the fact that the boilermakers are the better team on paper. Purdue went 9-4 last season in the midst of good Big 10 competition, topped two teams that entered games ranked in the Top 5, and won a bowl game over Tennessee. Even minus former star defensive end George Karlaftis, the Boilermakers will be a tough out – but one the Orange will have to try and trip up ahead of a daunting midseason schedule.

Following a difficult opener against Louisville and dynamic quarterback Malik Cunningham, an easy-looking matchup against the Huskies in Week 2 looks to be SU’s first real chance to get itself right. The Huskies have a new coach in Jim L. Mora, but are still a program that has won just four total games since 2017. The only intrigue here is that this game is a battle between two former Big East combatants, but expect the Orange to break out big time in a confidence building victory. If SU somehow stumbles, it’ll be a giant warning sign of deeper and pressing issues.

The aforementioned Virginia tilt slots in a high-priority game for the Orange, who face a Cavaliers squad now minus former offensive coordinator Robert Anae and quarterbacks coach Jason Beck. Both of those names now work for Dino Babers’ staff at Syracuse, and have generated plenty of intrigue with their quarterback development pedigree. The Cavs had a high-powered offense in 2021 with Anae behind the scenes, but it’s an open question for UVA as to how much of last year was system and how much wasn’t. Doubling the importance of this game is what lies afterwards for SU: a Week 5 softball matchup with Wagner College that’ll be truly impossible to lose. This is a game against a rare Coastal Division team that the Orange cannot look past and desperately need to claim.

SU’s 21-6 thumping of Boston College last season over Halloween weekend didn’t register on many seismometers, but it’s a sure guarantee that this year’s matchup between two longtime rivals will mean a little bit more. The Orange and Eagles both have bowl aspirations this year, and both teams may need this regular season-ending matchup in Chestnut Hill to possibly get to win No. 6. The Orange in particular may be gasping for air down the stretch after a four-week gauntlet against NC State, Clemson, Notre Dame, and Pittsburgh through the end of October. A finale against a Boston College team now likely equipped with returning quarterback Phil Jurkovec (who missed last year with injury) may make for prime ACC viewing.

You could flip this game and the Boston College matchup here and have a pretty good case either way, but I truly believe that the Orange need to beat FSU in mid-November even more. A realistic look at the schedule reveals five likely losses for the Orange – the four-game death march described above and Louisville in Week 1. That means SU may need the rest of its games, and if you believe Syracuse loses a toss-up with Wake Forest in Week 11, FSU becomes all that much more important. The ‘Noles are a team that may surprise this year, but they may still be a year away from fulfilling head coach Mike Norvell’s vision. If Florida State is middling by late season and the Orange are in desperate need of confidence after several losses in a row, this is a matchup SU may be required to net to even keep its bowl hopes alive. Without a win here, the finale against Boston College may not end up mattering after all.