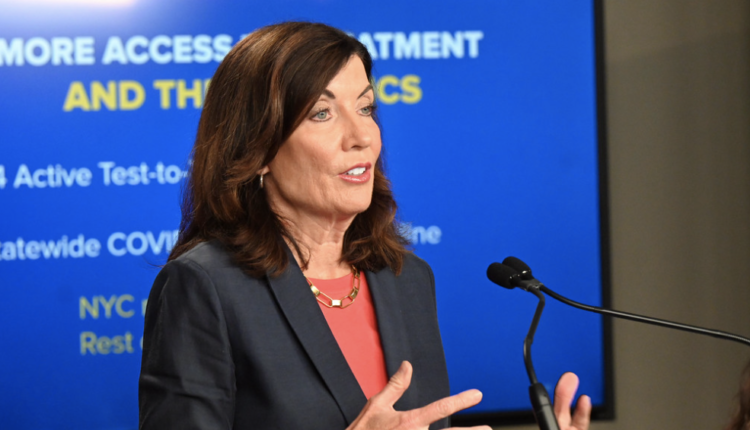 Last week, Governor Hochul extended one of her two pandemic-related emergency orders into its ninth month – an action so routine and non-urgent that her office issued no press release.

Five days later, an exposé in the Albany Times Union showed why casually overusing emergency powers can be a bad idea.

The article by reporter Chris Bragg found that the Hochul administration has paid $637 million to Digital Gadgets, a New Jersey supplier of in-home COVID tests that happens to be owned by major donors to the governor’s campaign.

Since December, the Health Department bought 52 million of the company’s tests at an average of $12.25 per unit, or $24.50 for a two-test kit, which is as much or more than consumers would typically pay in a retail store.

Because the purchases were made under one of Hochul’s emergency orders, they were not subject to competitive bidding or review by the comptroller’s office, as normally required by law.

Over that same period, the TU reported, Hochul’s campaign collected almost $300,000 from the company’s owners and their family members, some of whom have never previously contributed to a New York candidate.

The governor has denied any connection between the contributions and her administration’s choice of vendor. However, it’s fair to ask why Hochul continued evading laws that are meant to prevent waste, favoritism and corruption as the state’s pandemic trends improved.

Hochul has declared two pandemic-related emergencies since taking office as governor. Unlike the orders issued by former Governor Cuomo, they do not involve masking, vaccines or restrictions on mass gatherings or businesses.

The first, originally issued on Sept 27, addressed staff shortages in some hospitals and nursing homes. The bulk of that order waived the state’s licensing laws for medical professionals, making it temporarily easier for New York providers to hire out-of-state personnel or for non-doctors to handle a broader range of procedures.

The second, originally signed on Nov 26focused on the advent of the Omicron wave, which triggered the state’s “surge and flex” system for helping divert patients away from overburdened hospitals.

The November order also suspended three sections of the state Finance Law, including the provisions that require the state to seek multiple bids before making major purchases and mandates that that comptroller’s office review and approve major contracts.

At a press briefing on Wednesday, Hochul said her administration needed to move quickly to contain what became a major surge of infections and hospitalizations.

“All of a sudden the numbers were off the charts. And that was right around when we were talking about kids being home for the holidays,” Hochul said. “What we did in a very intense way – really a crisis situation – we had to amass as many test kits as we could. Because if we didn’t have them, we weren’t going to be able to send kids back to school.”

However, the payments continued – and increased – for another three months. Sixty-two percent of the money ultimately collected by Digital Gadgets was paid in late February and March, after COVID hospitalization levels had returned to their pre-omicron lows (see chart).

By that point, the department presumably would have had the time to seek bids from multiple other vendors and submit contracts for vetting by the comptroller. Instead, Hochul continued bypassing those requirements by renewing her emergency order every 30 days, most recently on Jul 14.

She has also repeatedly extended her September emergency order about healthcare staffing, most recently on June 29 – even as hospital capacity crunch has stabilized, with 10 percent to 20 percent of beds vacant in most parts of the state.

Hochul has kept in place two other emergency declarations issued by Cuomo – one targeting gun violence and another focused on conditions at New York City’s Rikers Island jail complex.

The Legislature, which can overrule any emergency declaration that lasts longer than 30 days, has declined to intervene.

By definition, the governor’s emergency powers are meant to be used in response to urgent, unexpected, short-term situations, when moving quickly and dispensing with red tape may be necessary to save lives. As months rolls by, allowing the governor to bypass established laws and regulations becomes increasingly hard to justify—and increasingly vulnerable to abuse.

This is not to say that the coronavirus pandemic is over. But after two years and four months, it’s time for Governor Hochul and the rest of state government to handle it – along with gun violence and Rikers Island – as the chronic, long-term problems that they are.