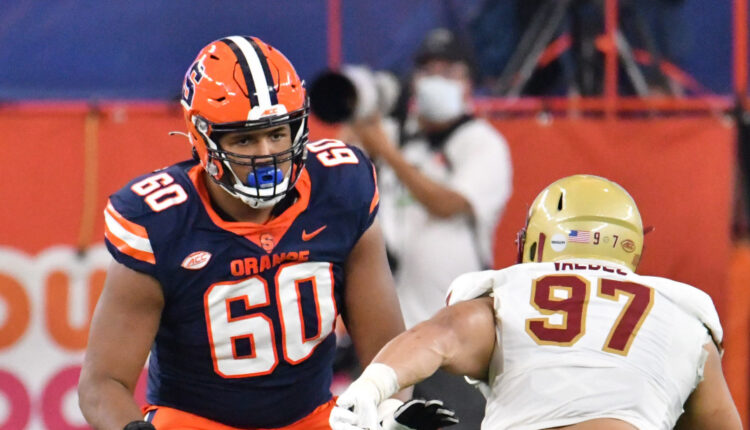 Matthew Bergeron (LT): Bergeron started all 12 games at left tackle in the 2021 season and 28 straight games over the past three. The Orange averages four yards per carry off his left tackle spot, good for the highest in the ACC according to ESPN Advanced Stats. If Bergeron continues his success, it could open up even more opportunities for the run game.

Kalan Ellis (LG): The Hawaiian played nine games with just five starts in his freshman campaign. At 6-6, 390 pounds, Ellis finds himself among the biggest linemen on a depth chart that already has much size and skill. The sophomore was slotted in at left guard with Chris Bleich out for the final four games of last season If Bleich is not 100% by the start of camp or cannot stay healthy, Ellis could move to right guard depending on how Dakota Davis is performing at tackle.

Carlos Vettorello (C): Vettorello played in the first eight games of the season before suffering a season-ending injury at Virginia Tech. Prior, Vettorello had been the starting center for every game in 2020 and three contests in his 2019. Although, even if he returns at full strength, the redshirt junior must show consistent protection to keep his job once the season begins.

Chris Bleich (RG): With the expectation of a starting spot, Bleich was a huge factor in successful run game throughout the first half of the season. The biggest question for Bleich is staying healthy. If he can stay in uniform, the 6-6, 335-pound redshirt junior should help the run game be a threat in the ACC.

Dakota Davis (RT): After missing the first two games of the season, Dakota Davis made nine starts in the final 10 games of the year. Davis’ return—and the weeks that followed—helped Sean Tucker lead all of college football in rushing years by week nine. His presence on the interior at 6-5, 325 pounds will be imperative in the continued success in blocking the run.

Josh Ilaoa: Ilaoa started in only one game last year against Pitt. The sophomore was the backup option at center for much of the season to Airon Servais but with a healthy Vettorello returning, it would take an injury or poor play for him to insert himself into a starting spot at center or guard.

Darius Tisdale: The 6-5, redshirt senior primarily spent time as a guard in the eight games he saw the field last season but missed four games with an injury after the win at Florida State. With the right side of the line potentially playing musical chairs in the beginning of the season, look for Tisdale to make spot starts at both right guard and tackle.

Jakob Bradford: The JUCO transfer saw the field in just two games during the 2021 season. At 6-5 with lateral speed and agility, Bradford should get his chance to play here and there. Could see some spot starts on the right side.

Anthony Red: Red has not played much since becoming a part of the Orange. A couple of appearances against Ohio and UAlbany in September make up his Syracuse resume for now. But with line coach Mike Schmidt, Red can work his way into a backup option for Bergeron at left tackle.

Wil Froumy: As a redshirt junior who has not played many games, Froumy has a steep mountain to climb this season. But his athleticism at 6-6 and shedding weight from last season will bode well for the linemen.

Garth Barclay: With a 6-7, 285-pound frame, Barclay’s size could make him and appealing option to the coaching staff this season. Although he did not see the field last season, with his size there is always a chance.

The players listed above give Syracuse a pretty deep bucket of options to choose from at the conclusion of training camp. But this group has a plethora of talent waiting in the wings. Mark Petry missed all of 2021 with an injury but played in 10 games as a reserve lineman and on the PAT/field goal unit.

Enrique Cruz was the best player in Syracuse’s 2021 recruiting class which could land him some early season appearances by his rating alone. Others include Wes Hoeh, Austyn Kauhi, Tyler Magnuson, Mark Petry who all have the opportunity to prove themselves at training camp.

Prior to last season, many viewed Syracuse’s offensive line as one of the biggest issues for the Orange. The 34 sacks allowed by the o-line in 2021 can certainly help bolster that argument for this season. But there is also a case to make that they have potential to be in the top half of the ACC in facilitating the run.

Sean Tucker finished fourth last season with 1,496 rushing yards breaking Joe Morris’ single season record and set another program record with seven straight 100-yard games. None of that would have been possible without the offensive line doing their job. Big picture: if the line can stay healthy, there is no reason their consistency can create many opportunities for both Tucker and Shrader to pound the ground game in 2022.