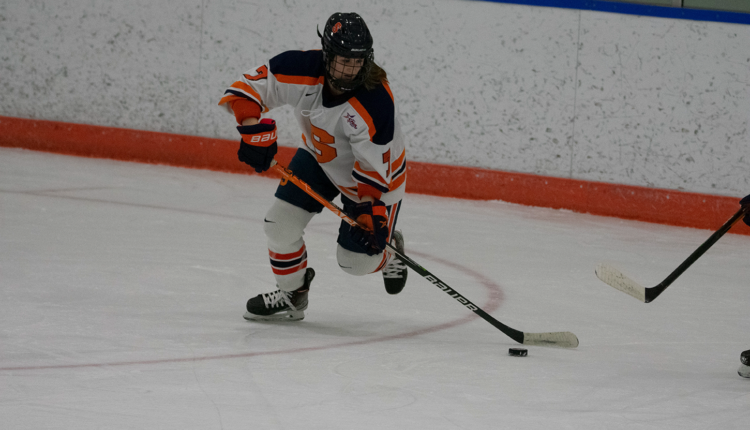 Syracuse’s (7-15-1, 4-2 CHA) vs. No. 10 Cornell (10-6-2, 8-3-1) game plan was set to get aggressive but quickly backfired. The Orange wanted to score the first goal, which they have struggled with this season. Syracuse got as many attackers as possible into Cornell’s zone early on, but the pressure didn’t create much of an opportunity.

The Big Red took the pressure from the Orange well and waited for the right moment to break.

Shortly after a faceoff in Cornell’s defensive zone, the Big Red turned defense into offense. A fight for the puck behind the net led to an attempt by Cornell to clear. Hannah Johnson hit the puck at the blue line but was quickly shut down by Kaitlin Jockims. Jockims’ pressure forced a miss. Alexa Davis was the first, with time and space. Davis saw jockims race across the ice and shoot a pass through the lines back at her. The Syracuse defense lost track of Jockims and took the puck with a stride for a one-on-one chance.

Jockims lobbed a shot that clanged off the post and smashed Arielle DeSmet to give Cornell a 1-0 lead in under five minutes.

Cornell’s early goal set the tone in Syracuse’s 4-1 loss to Cornell. The Orange failed to contain Cornell’s Transition Offense. When given space, Big Red punished Syracuse while Orange fought to counterattack. Syracuse looked dangerous at times, but attacks fizzled out once you got into the attacking zone. The loss is Syracuse’s sixth straight loss and their 11th loss this season against a ranked opponent.

“I don’t think there was a misunderstanding,” Syracuse head coach Britni Smith said of the opening goal. “I have to go back and watch but it came when they were just able to outpace us from the rush.”

The smallest error of the orange was picked up. The Big Red turned every turnover into a ruthless attack. Cornell quickly approached the Syracuse defenses. Izzy Daniel and Gilles Frechette caused problems at the break. Their determination caused problems for the defense of Syracuse.

“Their team speed is something we knew we had to counter,” Smith said. “We tried to keep them outside the points, let them feel our presence inside the points, and get them to reach the areas where they can score.”

Syracuse focused on stopping Daniel and Gilles, who led Cornell in goals and assists. Daniel recorded one goal and one assist to bring her season total to 11 goals and 19 assists. Gillis recorded her 19th assist of the season, scoring nine goals.

“They have a lot of skill and you never really know where they’re going,” said Lauren Bellefontaine, “Even though they look like they’re going one way, they can go the other way. In some places it was difficult to keep up, but I think we stuck with it anyway.”

Daniel scored with a quick break to double Cornell’s lead early in the second period. The Big Red followed up by scoring through Alyssa Regalado to make it 3-0 two and a half minutes later.

Syracuse struggled to capitalize on its chances. The Orange could not convert their first four chances in the power play. Cornell moved as a unit and closed potential firing lanes, making it difficult for Syracuse.

“They’re very aggressive and they like to come off the rails, so you really only have one way to go,” Bellefontaine said. “It was important to move the puck very quickly and get them out of position to try and break them.”

The orange eventually converted one of their power play opportunities. Bellefontaine glided into space waiting for runners. Sarah Thompson flashed between a group of Cornell defenders. Bellefontaine put it straight onto Thompson’s bat and redirected it into the net for Syracuse’s first goal. Thompson’s ninth goal of the season as team leader came with a minute left and was too late.

From behind, Syracuse tried to create chances but managed just 21 shots on goal compared to Cornell’s 35. Tatum White was often the point of attack for Syracuse. White nearly set Rayla Clemons up twice with centering passes, but Clemons couldn’t get her stick in time.

“It really kickstarts energy, especially on the bench,” Johnson said. “Knowing that we are fighting and not just letting our teammates push you around. I think it’s a good thing.”

At times, Syracuse was overpowered but attempted to match Big Red’s physicality on the ice by pushing back. The Orange used their forwards to aggressively check ahead and slow Cornell’s attacks.

“We’re definitely going to use what we did against top 10 teams,” Johnson said. “We’re going to play the same way we’re going to have these guys, but hopefully we’ll come up with a little more success.”