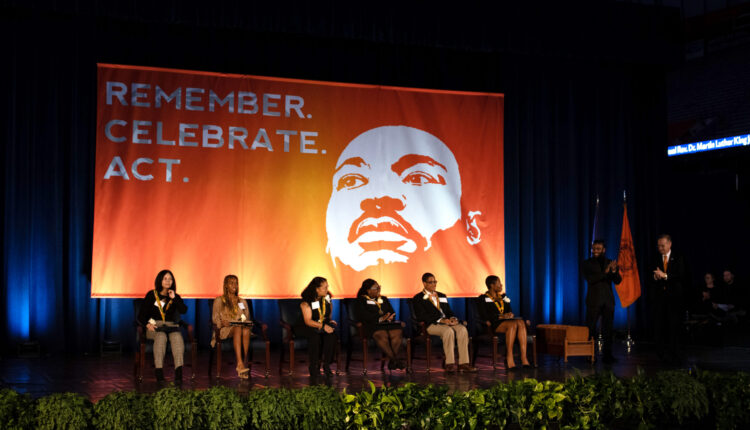 When Candice Ogbu was a peer health advocate at Planned Parenthood, she developed a free citywide resource list to meet the needs she saw in the Syracuse area. Two years later, Syracuse University recognized Ogbu as a 2023 recipient of the Unsung Heroes Award for her work in the local community.

The awards recognize Ogbu and five other Syracuse community members who have made a positive difference in the lives of others but have not received widespread recognition for their contributions. SU presents the Unsung Hero Awards, which were announced last week, each year at the annual celebration of Rev. Dr. Martin Luther King Jr. at the university to recognize his influence, according to SU’s website.

The awards recognize contributions to the SU campus — such as Wilson’s involvement with university media organizations and Henry’s efforts to include non-traditional students in the SU campus environment — as well as the efforts of community members, such as Brumfield and Ogden’s work, to increase discussion of racial justice in local schools and Fair’s commitment to combating toxic levels of lead in local drinking water supplies.

Ogbu said she plans to use her recognition as an unsung heroine as a vehicle to advance causes and initiatives she is already working on.

“I am very grateful to have been nominated let alone selected as a recipient,” Ogbu wrote in an emailed statement. “Not only is this a great honor, but it will also have a positive impact on the initiatives that I wanted to launch.”

Ogbu said the new organization she is working to found, PP Generation, will focus on student leaders who want to advocate for sexual, reproductive and gender rights. Ogbu also previously served as Chair of the SU Student Union for Diversity, Justice and Inclusion and served as a COVID-19 Impact Analyst for the City of Syracuse.

This year’s celebration is the first to be held in person since 2020, with both the 2021 and 2022 events being held via Zoom to comply with social distancing guidelines during the COVID-19 pandemic.

In addition to honoring the 2023 winners, this year’s ceremony, held Sunday night at the JMA Wireless Dome, also commemorated the 2021 and 2022 winners, previously honored only through online celebrations.

Although this year marks the 38th King Jr. celebration, it is only the 29th year that SU has held a celebration for the Unsung Hero Awards. The award ceremony began in 1994, nine years after Rev. Dr. Martin Luther King Jr. in 1985, said Keith Kobland, associate director of SU media relations.

Nominees for the award “embody the spirit of Dr. King” through selfless service to her community, according to a press release from SU. Marissa Willingham, manager of the SU Intercultural Collective and a member of the Unsung Hero Award selection team, said the team pays great attention to how candidates perform for their cause and for the community.

“We’re looking for people who are passionate about their work and genuinely committed to advocacy and making sure they’re speaking the truth of what that really stands for,” Willingham said.

The committee accepted nominations for this year’s awards from late October through mid-December. Willingham said the number of applicants fluctuates each year but typically ranges from 25 to 100 people. From that pool, she said, the committee selects between five and eight people as unsung heroes.

Nominees based on their community and demographics fall into one of four categories: a youth or teen from Onondaga, Madison, Oswego, Cayuga, or Cortland counties; an adult in Onondaga or surrounding counties; a student at SU or SUNY ESF; or a faculty member at SU or ESF.

After receiving nominations, Willingham said the committee goes through a “detailed” rubric to determine the extent to which the nominee embodies what King Jr. stood for and to examine whether they have received any prior recognition.

The committee asks nominees to submit items that could reflect some sort of recognition of their achievements, such as a Linkedin profile, portfolio or links to their social media accounts, Willingham said. This allows the committee to see which nominees have received recognition and which meet the unsung trait.

Willingham explained that the goal of the Unsung Hero Awards is to shine a spotlight on members of the community who have not or typically not been praised for their contributions, rather than those who have already been widely recognized.

“Because they were ‘sung’, that’s not what ‘Unsung Hero’ is,” Willingham said. “We’re looking for the people who fall through those cracks and do the work but don’t get recognized.”

Though Ogbu said the Unsung Hero Award is meant to honor her own work and role in the campus community, she said she hopes it inspires other people.

“I would hope that people would come to associate the Prize of the Unsung Heroes and its recipients as representing communities and the cause they serve,” Ogbu said.