Storms move out, heat wave moves in on Long Island 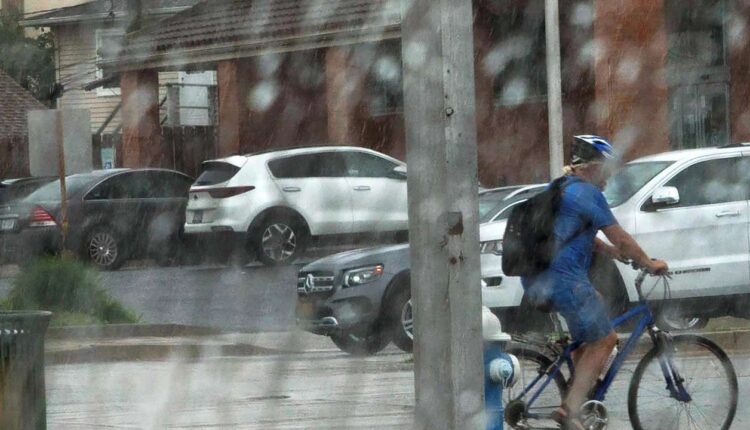 Powerful thunderstorms that made Monday on parts of Long Island a washout will be replaced Tuesday by a wave of heat forecast to continue for the rest of the week.

Temperatures Tuesday will climb into the low 90s and hover there through at least Saturday, according to the National Weather Service. The day will start out cloudy before sunshine gradually breaks through and the humidity climbs to about 80%.

Several cooling centers will be open, while pools and beach hours will be extended.

Tuesday night will be mostly clear with a low of 73 degrees.

The heat wave follows Monday’s thunderstorms, which dumped nearly 4 inches of rain in spots, mainly across the North Shore. The wet weather was part of a system stretching from Washington DC to Boston on Monday.

A flash flood was reported in Greenport, according to a weather service storm update late Monday.

Wind speeds of 42 mph were reported at Glen Cove.

On its website, the weather service said the risk of flooding across the East Coast was mitigated by “recent dry conditions” that led to “low stream flows.”

Even so, flooding was reported on Long Island. Scott Russell, the Southold town supervisor, said flooding led to the temporary closure of part of Front Street in Greenport, as well as “some flooding in areas that we’re not used to,” including Oregon Road in Cutchogue.

“We had flooding throughout the town,” he said. There were also downed utility wires and trees.

In Hempstead Town, beach hours will extend to 7 pm, while town pools will stay open until 8 pm, town officials said.

Senior centers will be open for cooling from 9 am to 4 pm at several locations, including Baldwin, Bellmore, Elmont, Franklin Square, Levittown, Merrick, Oceanside and Wantagh, Hempstead Town officials said.

In Suffolk County, cooling centers are run by Suffolk towns and residents should contact their local municipality to find a location near them.

In a news release, Gov. Kathy Hochul’s office urged residents to visit cooling centers and check in on “vulnerable neighbors.”

“The New York State Division of Homeland Security and Emergency Services’ Emergency Operations Center is monitoring weather conditions, communicating with local emergency managers and will coordinate any response needs from local governments,” the release said. “The State’s stockpiles are prepared to deploy assets to support localities in need.”

The heat will remain Wednesday and Thursday, with highs both days about 93. There’s possible relief after 2 pm Thursday with a 30% chance of thunderstorms, according to the weather service. On Friday, another day with temperatures in the low 90s is in store, along with sunny skies. The low Friday night will dip to 72.

Conditions will be “hazardous” for all small craft, the weather service said.

By Matthew Chayes and Keldy Ortiz

People ask Rakeem Christmas the same questions. It’s inevitable as the son-in-law of a superstar