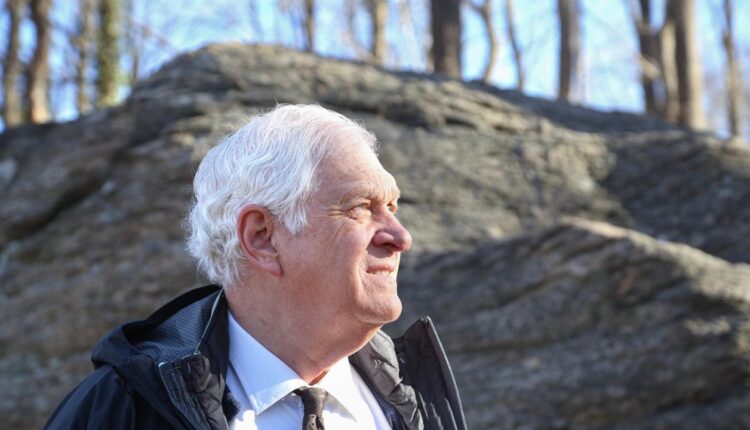 Steven Englebright has been an environmental advocate in the State Assembly for 30 years and was one of the early advocates for the preservation of the Pine Barrens. But he counts his last three years in office as one of the most influential.

Englebright, a geologist and educator by trade, said the productive end of his tenure began with the passage of the 2019 Climate Leadership and Community Protection Act, which aims to end New York’s dependence on fossil fuels. The legislation aims to generate 70% of the state’s energy from renewable sources by 2030 and 100% by 2040. The law is particularly important because New York is an example for other states, he said.

“The overarching challenge of our time is to set a standard for our sister states and other nations to address emissions from burning fossil fuels,” Englebright, 76, said in a recent interview at his Setauket office. “And to move away from that as our primary source of energy and literally clean up our act before we reach a tipping point of no return.”

Englebright, a Democrat who has served in the Assembly since 1992 in northeast Brookhaven Town, including Stony Brook, Setauket and Port Jefferson, lost to first-time Republican challenger Ed Flood by about 700 votes in the November election.

1983-1992 Served in the Suffolk County Legislature

1992 Election to the state parliament

2019 sponsors the Climate Leadership and Community Protection Act, which goes into effect

Flood, an assistant attorney for Brookhaven Town, benefited from Long Island’s red wave and Shirley’s Lee Zeldin topping the governor’s chart, said Jesse Garcia, leader of the Suffolk County Republican Party. Garcia said it appeared to voters that Englebright’s campaign campaign focused only on the environment and not on crime or inflation.

“The first task is to protect and provide public safety for your citizens and your residents,” Garcia said. “And that’s where Steve Englebright failed.”

Englebright countered that he also advocated securing funding for the rehabilitation of the Long Island Expressway and for schools. He also noted that he was one of the earliest proponents of revising the state’s bail bond reform law.

Chairman of the Environment Committee

Englebright, who has chaired the assembly’s environmental protection committee since 2015, said he has lost count of his legislative victories.

Two years after the Climate Act, Englebright sponsored the so-called Green Amendment, which enshrined New Yorkers’ right to a clean environment. It was adopted by voters in 2021.

The following year, he pushed for the $4.2 billion Clean Water, Clean Air and Green Jobs Environmental Bond Act to fund climate-related projects. It was passed in November with 67.62% of voters in favor.

Long before that he had protested against the opening of the Shoreham nuclear power station. While serving in the Suffolk County Legislature, he lobbied for voter acceptance of the Drinking Water Conservation Program, which uses a 1/4 percent sales tax to fund open space conservation and more.

In 1993, early in his state tenure, he was instrumental in passing the Long Island Pine Barrens Protect Act, which regulated development in the 100,000-acre Central Pine Barrens region.

“He talked about it [the Pine Barrens] in the early 1980s, long before any other official,” said Peter Scully, a former regional director for the state Department of Environmental Conservation and vice chairman of the Suffolk County board. “The final passage of the Pine Barrens Protection Act is something that is part of its legacy that will be recognized for generations to come because it will help ensure we have an adequate supply of clean drinking water for the future.”

Longtime colleague Assembl. Fred Thiele (D-Sag Harbor) was City Warden of Southampton when the Act was passed. Thiele, who played weekly basketball games with Englebright at the State Police Academy in Albany during her tenure, said Englebright was able to translate into legal terms the technical reasons for preserving the area.

“He had the scientific background we needed to establish why the Pine Barrens Act was important,” Thiele said. “He put the science into political science.”

Adrienne Esposito, executive director of the Farmingdale-based Citizens Campaign for the Environment, said no one has left a greater legacy of land conservation on Long Island.

“When we went to him with protection and recovery ideas, he got them straight away,” she said. “Other legislators often need convincing and persuasion. But he became a partner instead of a block.”

He said respect for the environment was instilled in him by his grandfather, a vegetable farmer in Evansville, Indiana, and through his participation in the Boy Scouts.

His educational background is in the natural sciences, but he’s also devoted to the preservation of historic sites, which include a plaque in his district that was installed this fall and funded in part with government funds at the Patriots Rock site in Setauket. He can talk at length about the Setauket connection to the Culper Spy Ring as well as the island’s geohydrology.

“He seems reticent, but Steve has a burning passion for these issues,” Thiele said.

Englebright, who lives in Setauket with his wife Sue Meyers, a Setauket Fire Commissioner, said he will continue to advocate for environmental issues, including legislation that requires manufacturers to take responsibility for the recycling of their products as well as heritage preservation . He did not rule out running for public office again.

“I may leave this office, but I will definitely remain involved,” he said. “I will continue to be a voice committed to preserving and protecting the essential resources that define who we are.”