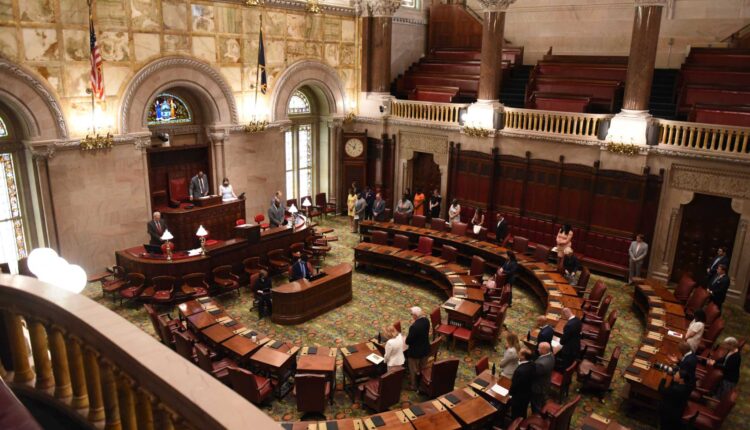 ALBANY — New York Senate staffers have begun organizing a labor union, a step that could eventually allow them to collectively bargain a contract.

On Friday, a group of Senate legislative staffers announced that they are in the process of forming the New York State Legislative Workers United (NYSLWU).

According to a press release, those looking to become members of the NYSLWU hold a range of ideological perspectives and work in Senate offices representing “every corner” of New York. The staffers recently delivered a letter to Senate Majority Leader Andrea Stewart-Cousins ​​requesting support for their efforts to organize their workplaces in the Senate.

“At this stage, our intention is merely to make ourselves known so that we can continue to organize in public without fear of retaliation,” the group told Stewart-Cousins. “We look forward to embarking on this process with you, and eventually sitting at the table to collectively bargain for a contract that recognizes the value and level of service we bring to the New York State Legislature.”

A Stewart-Cousins ​​spokesman told the Times Union on Friday, “We have received the letter and will review any additional information forthcoming.”

The effort in the state Senate follows the successful unionization of the New York City Council staffers, US Congressional staffers, and legislative staffers in Massachusetts.

The NYSLWU has retained the law firm Levy Ratner as counsel as it works to organize and is collecting union authorization cards from legislative employees. It’s unclear whether Senate leadership will voluntarily agree to recognize the union though some members were supportive of the efforts Friday.

While the Senate workers’ specific demands were not laid out in the letter to Stewart-Cousins, several legislative staffers tweeted on Friday about what they were seeking.

“It’s time for our staff to have a seat at the table on our wages, equity, healthcare, medical leave, etc: the same rights we fight for every day for all New Yorkers,” wrote Maia Berlow, deputy chief of staff and legislative director for Democratic state Sen. Brad Hoylman.

New York legislative employees’ jobs do not carry the same civil service protections as many executive branch workers. It’s also not uncommon for staff to work long hours during the state budget season — far beyond the normal work week — then be asked to use make-up time to volunteer on state political campaigns.

While the NYSLWU says Senate staffers are allowed to unionize under the state’s Taylor Law, that was questioned on Friday by Ken Girardin, a fellow at the fiscally conservative Empire Center for Public Policy, who said that unlike staffers in the executive branch, the 1967 law does not authorize legislative employees to collectively bargain.

“Absent a major change to the Taylor Law (and possibly the state Constitution), any arrangement that binds legislators or a legislative body to the terms of a union contract would raise a list of practical and legal issues, and a union would struggle to get state courts to enforce them,” Girardin wrote on Friday on the think tank’s website.