Notre Dame did a lot of things right against Syracuse 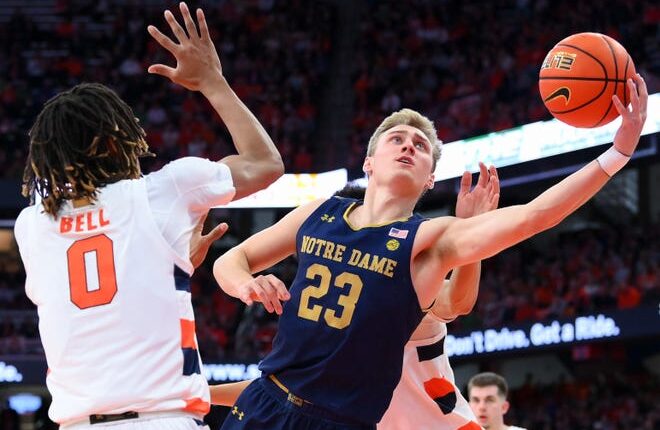 Just tossing aside with the hope left in a season without her?

Ask the Notre Dame men’s basketball team, who keep finding new and frustrating and downright draining ways to lose Atlantic Coast Conference games. On second thought, don’t ask the Irish. After that there are no more answers.

So many good numbers dominated Saturday night’s final stat sheet in central New York for Notre Dame. The Irish did a lot of things right in their quest for their second league win in a row and their first away win of the season. Except when it mattered. And where it counted – on the scoreboard.

On their way to a second straight league win and first on the road since March, Notre Dame watched as Syracuse stormed back from a 12-point deficit and clinched a 78-73 win with 12 minutes remaining that put the Irish in 9th place Dropped -9 overall, 1- 6 in ACC.

Some of the final numbers – aside from the final score – say that Notre Dame should have won this game and could easily have won it. Won by checking the old core looking too old with every passing loss in the closing seconds and emptied the bank allowing guys like Dom Campbell and Robby Carmody and Alex Wade and Mat Zona to run a few minutes in the JMA Wireless Dome.

Notre Dame posted a season-high 15-3 points. It ended with a season-high 21 assists. Under head coach Mike Brey, it was textbook Irish basketball for most of the evening – swing it, share it, shoot it. Niagara guard Marcus Hammond had a season-high 18 points. The Irish committed just five turnovers. Man there was so much to like. From a statistical point of view. From an offensive flow standpoint. From a they-will-this-one point of view.

In the end, the Irish have only lost a sixth league game (last season they lost five).

“I feel for our boys,” Brey said. “We were really good. This is perhaps the best zone offensive we have ever done.”

Finally, however, you fail to find the words to describe the ongoing disappointment at the conference, the near misses and what could have happened. How all this is happening to a group that shouldn’t let this happen. Notre Dame had the ball and a chance to win at Florida State last month. Not. Notre Dame rose double digits at Boston College this month and lost. The Irish led by 12 on Saturday – their biggest lead in league play this season – and still missed it.

It’s just one of those years with the one team that shouldn’t let that happen. It just keeps happening. This team can’t win a tight game because deep down they probably don’t really believe they can end a tight game. Can’t do the hard stuff – stop, take a shot, believe.

There is a crisis of confidence that no amount of profit, no matter how small, can solve. Not later this month. Not next month. Or the following. Maybe in the spring, when everything starts anew, then this program too.

It has lost both. That’s really hard to do. The Irish made it easy for themselves.

We keep hearing how this core has seen it all throughout his career – wins, losses, tough losses, big wins. But what does all this mean? Where has it got these Irishmen other than in a game from the league basement?

Malcolm Huckaby, a color commentator on ACC Network, mentioned late Saturday that Brey spoke of how his boys – like his old boys – seem to play better, seem to be at their best when backed into a corner. wait what

They might have been earlier in the week when Notre Dame was less than four minutes behind at seven, but found a way to find out at home in an overtime win over Georgia Tech. How would this comeback propel the Irish through the rest of the week? The rest of the month? Notre Dame didn’t know, but insisted she go to the Dome to find out.

Earlier in the week, a late matchday conversation told you everything you needed to know about the Irish and their collective mindset. Graduate security guard Cormac Ryan spoke up, speaking loudly, and his teammates all seemed to fall into line.

On Saturday, a late-game huddle told you everything you need to know about these Irishmen. When Brey spoke against Syracuse in the closing minutes, five Irishmen sat stone-faced around him. Nobody said much. Someone on the edge of the circle then joined in as the horn blew to return to the ground: “Let’s win it.”

Back from that timeout when the scrum looked more doom than determination, Notre Dame turned it around immediately on the inbound pass when a tricky offer from Trey Wertz (Super Senior) fell out of the hands of Nate Laszewski (Super Senior). On the next ball possession, another late-clock situation, Wertz offered an airball. On the next possession, and with the Irish now having three minutes less, Dane Goodwin (Super Senior), unable to convert an open corner, saw 3.

Winning teams come back from a break, break in the ball and execute their offense. You get good shots that aren’t bailouts in end-of-clock situations. They take shots when shots absolutely must be taken.

“We had some looks there, really good ones,” Brey said. “We didn’t do that in the last six or seven minutes.”

Notre Dame went for a 3- from Hammond in the final 12 minutes. In a game of taking shots, Notre Dame stopped taking them.

That was it. This is your ball game. This is your season in a nutshell for these Irishmen who have lost all six games (two games at neutral, four league games) away this season. It is the first time since 2011-12 that Notre Dame has lost its first six home games to start a season, a season that took place mid-Sunday in January.

A year ago, the Irish were absolute buddies, winning 6-4 away in the league and winning nine away games in total. This year? Dogs only.

What makes a deeper cut after this one is that these old guys from Notre Dame got done by a bunch of kids. Syracuse made its crucial run – 14-4 to climb back in – with four freshmen on the floor. Four newcomers who probably don’t know any better against four (five) old guys who should know better.

“One area that hurts us is when we really need to defend to win a game and put our chest in there, at least on the street, we couldn’t do that,” Brey said.

And probably never will.