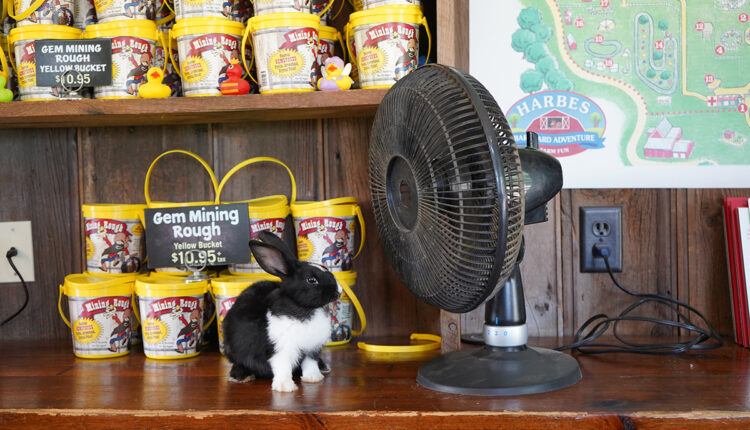 Rachel Orlowski, a cashier at Wickham’s Fruit Farm, said she was excited to go for a swim this evening after working in today’s extreme temperatures. (Credit: Victoria Caruso)

Working at a farm, there’s not too much you can do to stay out of the heat on a day like Wednesday on the North Fork.

You can seek shade and stay hydrated, but ultimately the list of daily tasks remains about the same.

“I’ve just been working through it,” said Rachel Orlowski, a cashier at Wickham’s Fruit Farm in Cutchogue, who added that a swim was a definite after her shift ended.

Across the North Fork, workers, residents and visitors alike were searching for ways to stay cool as the heat index nearly eclipsed triple digits at 99 degrees, according to the National Weather Service.

Ultimate relief is still more than 24 hours away. While the high temperature reached 92 degrees Wednesday, the NWS is projecting only slightly milder temperatures at about 88 degrees Thursday with a heat index of 95.

The heat advisory issued for Wednesday will remain in effect through 8 pm Thursday. An air quality alert is also active for Suffolk County through 11 pm Wednesday, according to the NWS.

For some on the North Fork, the heat was a good excuse to go to the beach or to eat ice cream. For others it meant keeping plans to visit a park or farm stand.

While both Riverhead and Southold towns opened up cooling centers, they were empty Wednesday afternoon.

Guests of Tanger Outlet Center were able to hide out in air conditioned stores, but for 30 minutes a little after 1 pm Wednesday the retail destination suffered an outage, according to PSEG-Long Island.

While the heat advisory ends Thursday evening, temperatures are expected to remain in the upper 80s and into the 90s through the weekend.