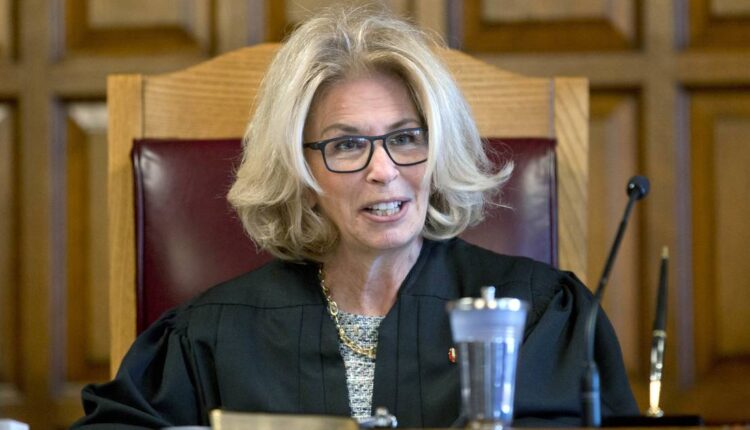 DiFiore announced Monday that she will retire from the bench at the end of August after serving as the state’s top lawyer for the past six years.

In a letter to colleagues, the 66-year-old touted structural changes made within the judiciary during her tenure and the reduction of backlogged cases and said she’s ready to move on to “the next chapter in life deeply proud of what we have been able to accomplish together.”

“Excellence is a mindset, one that is now fully integrated into the fabric of the New York courts, leaving us well prepared to meet the future justice needs of every lawyer, litigant and court user who comes to our courthouses seeking fair, timely and justice services,” she added.

A former district attorney in Westchester County, DiFiore was appointed as chief justice of the Court of Appeals by former governor Andrew Cuomo late in 2015. She assumed the position early in 2016.

New York Chief Judge Janet DiFiore, left, swears in Kathy Hochul, right, as the first woman to be New York’s governor while her husband Bill Hochul holds a bible during a swearing-in ceremony in the Red Room at the state Capitol, early Tuesday , Aug. 24, 2021, in Albany, NY (Hans Pennink/AP)

DiFiore, who previously served for a time as chairwoman of the now-defunct New York Joint Commission on Public Ethics, does not have a new job lined up but told The Times that there would be “another chapter in my professional career.”

gov. Hochul, who now has the opportunity to appoint DiFiore’s replacement at a time when progressives have criticized the seven-member Court of Appeals of being too conservative, praised the outgoing jurist.

“From the Westchester District Attorney’s Office to the Court of Appeals, Chief Judge Janet DiFiore has dedicated her career to the people of New York,” she said in a statement. “Chief Judge DiFiore’s leadership of our state court system — especially during the unprecedented times of the COVID-19 pandemic — has been a critical asset.”

Hochul said she looks forward to reviewing the recommendations of the Commission on Judicial Nomination “as we work to appoint new leadership to the Court.”

Criticisms have hounded the state’s top court over the past few years as Cuomo appointed several conservative-leaning judges who formed a four-member majority led by DiFiore.

Most recently, the Court of Appeals took heat from some for overturning congressional and state Senate lines drawn up by the Democrat-led Legislature in a decision that split the state’s primaries and upended the election calendar.

Rep. Hakeem Jeffries (DN.Y.), who has slammed the redistricting decision and final maps as racist, didn’t mince words in a terse statement on DiFiore’s departure.

The make-up of the court has also come under scrutiny in the wake of the conservative majority on the US Supreme Court and recent rulings abolishing federal abortion rights and upending New York’s gun laws.

“In light of recent US Supreme Court decisions and now news of the New York Chief Judge stepping down, it is more important than ever that Governor Hochul nominates and the Senate confirms a progressive chief judge,” Assembly Speaker Carl Heastie (D-Bronx) tweeted shortly after DiFiore’s plans became public.

Sen. Brad Hoylman (D-Manhattan), who chairs the Senate Judiciary Committee, said while DiFiore is responsible for “administrative reforms” within the court system it is time for a change.

“It’s time for a new direction in our judicial branch,” he said. “As the Chair of the Senate Judiciary Committee, I’m resolute that the Chief Judge’s replacement must be a jurist who will lead our Court of Appeals in a much-needed course correction that uplifts the vulnerable and ensures equity and justice for all.”

The most recent justice to join the Court of Appeals was Shirley Troutman, nominated by Hochul last year. Justices, who must be approved by the state Senate, serve 14 year terms or until they reach mandatory retirement at age 70.

DiFiore would have been eligible to serve until 2025.

Sweet Buffalo: 26 Shirts offers help to a family after daughters were burned in fire spill