Mushrooms are humble heroes in the climate war 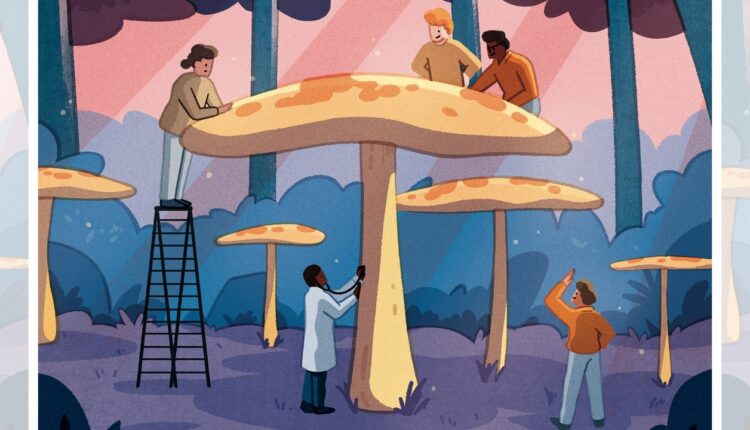 Fungi have often been wrongly viewed as inferior to the plant and animal kingdoms, but these microorganisms have the potential to help save the world from the devastating effects of climate change.

Right under our feet there is a universe of fungi that made life on earth possible. These master recyclers release nutrients that sustain all plant life and sequester carbon in the soil by capturing it from the air. The top meter of the earth’s soil contains three times as much carbon as the entire atmosphere and is therefore an important carbon sink along with forests and oceans.

Now a new generation of biotech companies, scientists and farmers are exploring the use of fungi to enhance plants’ ability to absorb carbon dioxide from the air and store it in the soil long-term. It’s just not enough to just reduce the CO2 emissions we’re pumping into the atmosphere: to tackle climate change, we need to reduce the amount that’s already there.

Researchers are identifying the best fungi from an estimated trillion different microbial species to store vast amounts of carbon underground. The Society for the Protection of Underground Networks (SPUN), a nonprofit group of scientists, has mapped the world’s vast underground mushroom webs. Collecting 10,000 samples from around the world, these researchers use machine learning to discover areas of biodiversity that could best protect natural ecosystems and store carbon, as well as identify vulnerable areas.

At Loam Bio we have already assembled a diverse library of thousands of isolated fungi from across Australia and North America, many of which are new to science. Our team used genetic sequencing and the latest bioinformatics tools to provide a better understanding of the inner workings of these organisms, how they interact with plants and affect soil carbon storage. After years of research in the lab, greenhouse and field, we developed our first products, microbial seed coatings that improve carbon sequestration in agricultural crops.

In 2023, farmers will start using such commercial mushroom-based products to fight climate change. Farmers in Australia are now applying such a product to their seeds before planting crops. It consists of beneficial fungi that grow in the roots of plants after germination. The plant absorbs carbon dioxide from the air and produces simple sugars through photosynthesis; the fungi convert these into complex and longer-lived carbon compounds. Fungi play a crucial role in converting easily degradable carbon compounds in the soil into long-term stable forms. Some of these combine with minerals in the soil and remain there for hundreds or, in some cases, thousands of years. If this technology were applied to all soybean crops across America, it would offset the equivalent emissions of the entire US aviation industry on an annual basis.

We’re already working with companies like Australian grain feedstock company GrainCorp to trial this technology. In 2023, we will roll out our first microbial soil carbon-raising product at scale to Australian grain farmers before rolling it out in the US.

Mushrooms break new ground everywhere. Mushroom mycelium has entered the market as a vegan substitute for leather. The mushrooms are grown in a controlled environment and then crafted into slabs of material similar in texture to leather. Lululemon, Stella McCartney and Adidas have introduced “mylo” products. Companies have also used mycelium as a binder to hold wood particles together for paneling and durable, flame retardant, lightweight packaging. Startup MyForest Foods has announced the opening of a vertical farm near Albany, New York, where it plans to grow around 3 million pounds of mycelium a year, enough for a million pounds of bacon.

If we can harness the untapped power of mushrooms and apply it to farmland – 1.8 billion hectares worldwide – it could lead to the greatest carbon loss in history. An annual growth rate of just 0.4 percent of the world’s existing soil organic carbon stocks could offset the current increase in atmospheric CO2. It’s about time mushrooms got the attention they deserve.

“Crown Jewel of the Shrines:” Basilica of Our Lady of Victory