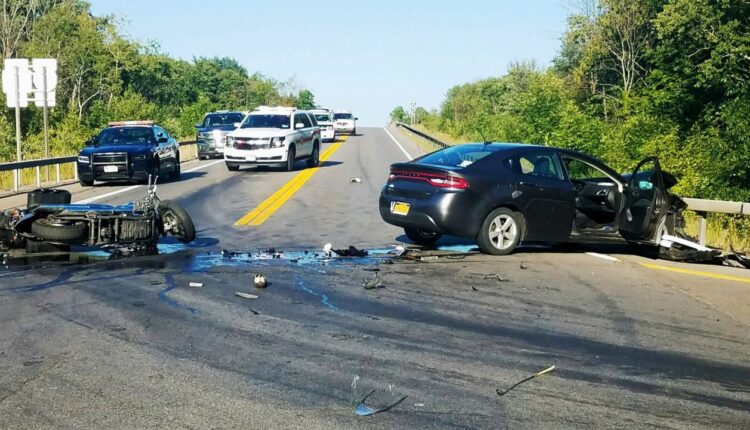 Syracuse, NY — A 74-year-old man died Saturday night from injuries he sustained after his motorcycle was hit by a car in Oswego County, troopers said.

Bruce W. Hinman, of Parish, was taken to Upstate University Hospital in Syracuse where he was in critical condition following the accident Friday night in the town of Mexico, State Police spokesman Trooper Jack Keller said.

The accident happened at about 5:17 pm near the Interstate 81 exit ramp to state Route 104, Keller said.

Hinman, driving a 2009 Kawasaki motorcycle, was traveling in a westbound lane on Route 104 when the driver of a 2015 Dodge Dart failed to yield the right of way while making a left turn onto Route 104, Keller said.

After the collision, Hinman was thrown from the motorcycle, Keller said. He was taken by McFee Ambulance to Upstate University Hospital.

The driver of the Dodge Dart, Luke Gollaher, 27, of Adams Center, was not injured in the crash, Keller said. He showed no signs of alcohol impairment, Keller said.

The crash closed Route 104 for about four hours Friday night, according to a state Department of Transportation alert.

The accident is still being investigated by State Police.

One Killed In Crash Near Kings Park Intersection