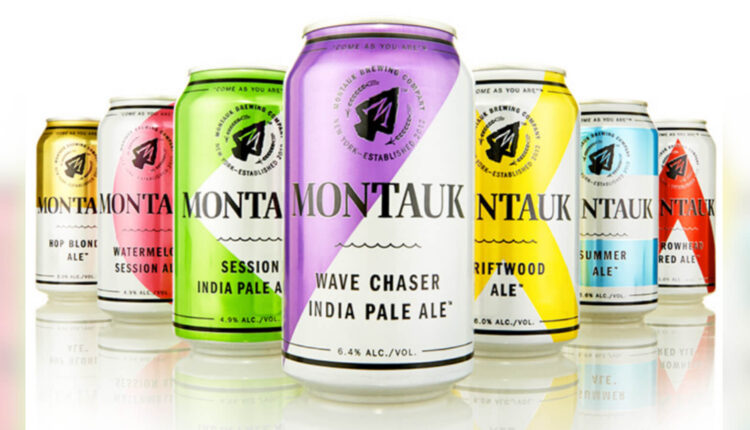 Just 10 years after it was founded by homebrewing high school friends, Montauk Brewing Company has entered the big leagues of the craft brewing world. The fast-growing brewery was acquired in November by Tilray Brands, Inc., the world’s top-grossing cannabis company with operations in Canada, the US, Europe, Australia and Latin America.

Montauk Brewing joined Tilray’s expanding U.S. beverage alcohol segment, which already includes Atlanta-based SweetWater Brewing Company, which Tilray acquired in 2020. Sweetwater is the 10th largest craft brewer in the US with distribution in more than 40 states, while Montauk Brewing was listed as the 49th largest US craft brewer in 2020 by the Brewers Association. Tilray also owns craft beer brands Alpine and Green Flash in Southern California, and a leading bourbon and spirits brand, Breckenridge Distillery.

Tilray’s commented in a statement, “Montauk Brewing is known for its popular product portfolio, best-in-class pricing and distribution to over 6,400 outlets, including top national retailers.”

Tilray also hopes to be at the forefront of introducing craft drinks with cannabis-based ingredients in the wake of potential federal legalization of marijuana in the United States. The Company owns Manitoba Harvest, a manufacturer of hemp, CBD and wellness products with distribution to 17,000 retail locations in North America.

Despite being born in Nova Scotia, Canada, Simon is no stranger to Long Island. After moving to the United States, he founded Hain Celestial Group in 1993 and grew it into one of Long Island’s largest public companies. Simon left Hain, a leader in the organic and natural products sector, in 2018 to become CEO of Aphria, a major Canadian cannabis company. He led Aphria’s 2021 merger with Tilray, another Canadian cannabis company, and became CEO of the merged company, which retained the Tilray name.

Simon is also familiar with the East End of Long Island and in late 2021 will become a partner at Lobster Roll aka LUNCH’s newly opened second location in Southampton. The Southampton location on the Montauk Highway became the first year-round location for the legendary Lobster Shack in Amagansett.

Montauk Brewing founders Vaughan Cutillo and Eric Moss will remain in place along with all other employees including General Manager Terry Hopper. The founders were friends at East Hampton High School and after attending college in craft beer-mad Colorado, Moss took up homebrewing and returned home with dreams of starting a brewery in Montauk. Cutillo and Moss started in 2012 with a small pilot brew system to perfect their recipes and decided to commission brew their beers to expand distribution in the Northeast.

The brewery quickly developed a loyal following for its flavorful and easy-drinking beers, including Driftwood Ale, Wave Chaser IPA, Summer Ale and Watermelon Session Ale. In 2015 they opened a taproom in Montauk with a 7 keg brew system that will remain open and continue to produce seasonal beers and support local community events.

Just as Blue Point decided to seek a partner to take it to the next level, the founders of Montauk said they were looking to the future. Cutillo said that Press“We are happy to have a good, strong partner who wants to keep everyone and let the brand grow.”

Bernie Kilkelly is Editor and Editor of LIBeerGuide.com.