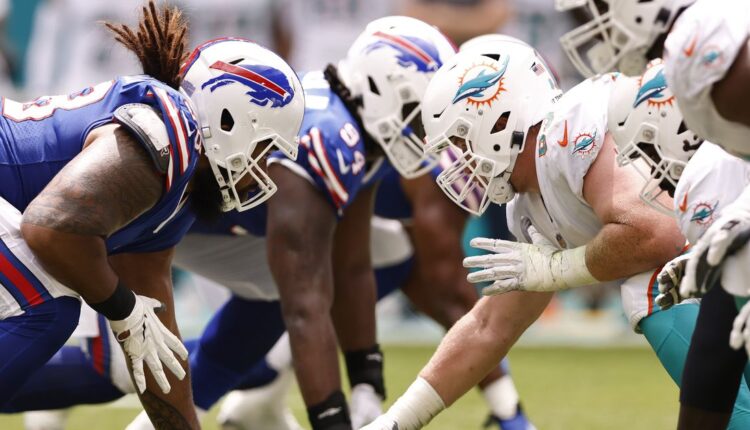 Our Miami Dolphins 2022 season preview picks back up today with a look at their Week 3 contest against the Buffalo Bills. These previews take a look back at the history between the two teams, breaking down the first game between the Dolphins and their opponent, the most recent game in the series, and any highlights from the games. In the case of the AFC East opponents, like today’s look at the Bills, the preview will look back at the history of the matchups between the teams at the scheduled location for that week. Today we look at the Dolphins hosting the Bills.

The first meeting between the Dolphins and the Bills in Miami was the eighth game in Dolphins history, a Week 10 (there were two bye weeks) contest in 1966. The second meeting between the clubs, the Bills completed the season sweep of the Dolphins with a 29-0 drubbing of the expansion franchise, backing up their 58-24 win earlier in the year. After a scoreless first quarter, the Bills put up 10 points in the second period, starting with a Jack Kemp pass to Bobby Burnett for a 16-yard score. Booth Lusteg kicked a 44 yard field goal to pull Buffalo out to the 10-0 lead at halftime, then opened the third quarter scoring with another 44-yarder. Burnett scored on a three-yard run later in the third quarter, with Kemp throwing a four-year touchdown to Paul Costa in the fourth. The scoring ended with Marty Schottenheimer blocking a Dolphins punt for a safety, giving the Bills the final 29-0 score.

Miami’s first home win – and win overall – against the Bills came in Week 13 of the 1967 season. The Dolphins struck first with a one-yard run from Stan Mitchell in the first quarter. Miami extended the lead to 10 with a 17-yard field goal from Lusteg, who had moved from the Bills to the Dolphins in the offseason. Buffalo struck twice in the second period, the first a 60-yard touchdown pass from Kemp to Monte Ledbetter, then on a one-yard run from Kemp. At halftime, the Bills led 14-10, a score that carried into the fourth quarter. Miami scored the game winning touchdown on a 31-yard pass from Bob Griese to Howard Twilley.

Miami has struggled over the past several seasons, having lost seven-straight times to Buffalo, including the last three times they hosted the Bills. Most recently, Buffalo came to Miami in Week 2 of the 2021 season and demolished the Dolphins 35-0. The game featured a 46-yard touchdown run from Devin Singletary, two rushing touchdowns from Zack Moss (seven yards and one yard), a touchdown pass from Josh Allen to Stefon Diggs from five-yards out, and a pass from Allen to Dawson Knox from eight yards away. Miami’s Xavien Howard picked off an Allen pass and Emmanuel Ogbah and Andrew Van Ginkel combined on a sack of the Bills’ quarterback, but those were about the only highlights for the Dolphins in a game that saw Tua Tagovailoa fracture several ribs and land on injured reserve .

The 1980s and 1990s were the height of the rivalry between the two clubs. During that time, Dan Marino and Jim Kelly, both selections in the 1983 NFL Draft, led the Dolphins and Bills, respectively. The 1990s included all four times the teams met in the playoffs, including two in Miami. The Dolphins lost the 1993 AFC Championship Game (following the 1992 season) 29-10 in Miami, with the Bills moving on to the third of four straight Super Bowl appearances after their win. Miami beat the Bills in the 1999 AFC Wildcard round (following the 1998 season) 24-17.

When is the game?

Where is the game?

How can I watch the game?

How can I stream the game?

What are the current betting odds?

Who has the all-time regular-season head-to-head advantage in Miami?

Who won most recently in Miami?

What are the coaches’ records against the other team in Miami?

Where can I get more Bills news?

KHN’s ‘What the Health?’: Drug Price Bill Is a Go in the Senate