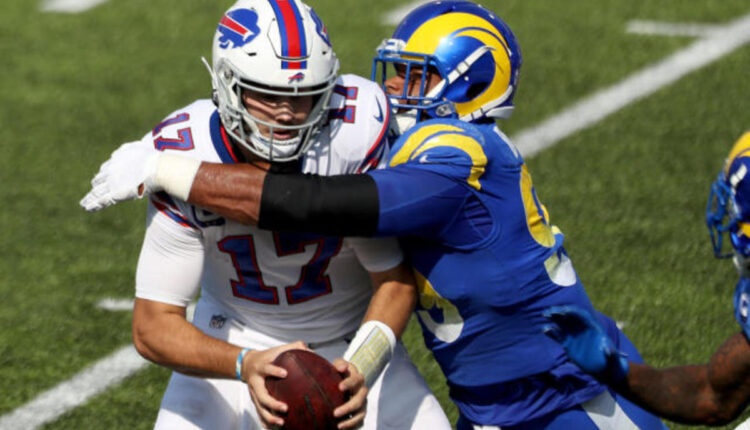 Despite an impressive victory over the Cincinnati Bengals in Super Bowl LVI, the Los Angeles Rams will not get the chance to rest on their laurels.

To open the 2022 NFL regular season, the Rams will face arguably the best team in week 1. Los Angeles will host quarterback Josh Allen and the Buffalo Bills on Sept. 8, the first game of the 2022 season.

While the Rams are confident in their ability to repeat as champions, they are highly cognizant of the Bills’ place at the top of their list of potential challengers. Despite Buffalo’s prowess on both sides of the ball, Allen remains their primary offensive weapon.

Allen’s abilities have certainly caught the Rams’ attention, especially that of Los Angeles’ defensive star Aaron Donald. The 31-year-old defensive tackle is looking forward to facing Allen and the Bills in the season-opener on Sept. 8 at SoFi Stadium in Inglewood, California.

“He’s a big guy. He’s a tough guy. He’s athletic,” Donald said on “Inside Rams Camp.” “In my opinion, he’s like a futuristic Big Ben [Roethlisberger]. A little bit more athletic, can move a little bit better. But he’s a guy that ain’t gonna go down easy so you gotta come with your big boy pads when you get to wrap him up.”

Allen played some of the best football of his career in 2021. The 25-year-old threw for 4,407 yards throughout the regular season with 36 touchdowns against 15 interceptions.

His dual-threat capabilities in both the passing game and the run game make him a metaphorical nightmare for opposing defenses.

Not to be outdone, Donald brings an elite level of play to the field each time he puts on a Rams uniform. Regarded as one of the greatest defensive players of all time, he has received a record three Defensive Player of the Year Awards, Pro Bowl selections in all eight of his seasons, and seven first-team All-Pro honors.

In Super Bowl LVII, Donald had two sacks and three quarterback hits, including the game-sealing pressure play on fourth-and-1 with less than a minute remaining, resulting in an incompletion and the 23-20 win.

Conversely, Buffalo is considered among the most complete teams in the NFL. In addition to Allen, wide receiver Stefon Diggs and tight end Dawson Knox, the Bills also added the services of linebacker and former Rams linebacker Von Miller to their defense — complementing the return of injured cornerback Tre’Davious White.

Unsurprisingly, the Bills have emerged as the betting favorites to win the Super Bowl, with Allen having the best odds of any player to win league MVP. Their matchup with the Rams has the makings of an instant classic.

In addition to the duel between Allen and Rams quarterback Matthew Stafford, Diggs will meet his coverage match in Los Angeles cornerback Jalen Ramsey, while Rams receiver Cooper Kupp will have his hands full in trying to shake free of White.

While the Rams-Bills matchup will make for an exciting opening to the 2022 NFL Season, its potential to close the season at Super Bowl LVII at State Farm Stadium in Glendale Arizona will make it that much more intriguing.

Want the latest in breaking news and insider information on the Rams? Click Here to sign up for the Ram Digest Newsletter

Want to join in on the discussion? Click here to become a member of the Ram Digest message board community today!