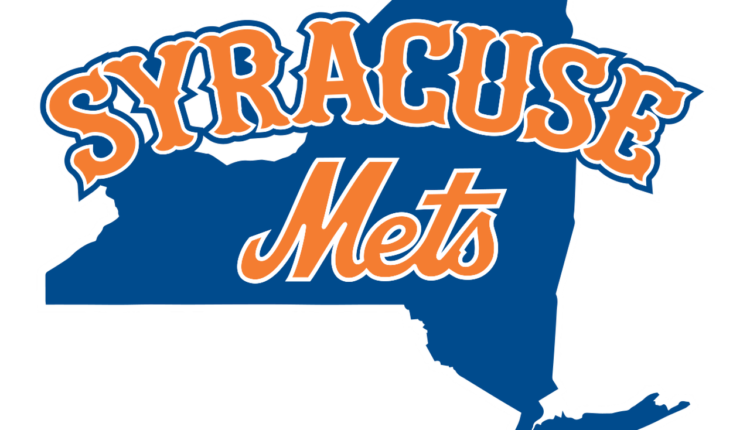 Allentown, PA – The Syracuse Mets rallied back from an early deficit but did not close it out late as the Lehigh Valley IronPigs won, 7-6, in ten innings on a warm, humid, and sometimes rainy night at Coca-Cola Park. The Mets have had a disappointing start to the week at Lehigh Valley, dropping the first three games of the six-game series.

Early on, it looked like Lehigh Valley (57-45) would roll to a victory as the IronPigs roared out to a 3-0 lead after the bottom of the first. Dalton Guthrie and Nick Maton walked to start the inning, and after Justin Williams was hit by a pitch with one out, the bases were loaded with the home team poised to strike. They did just that as Rafael Marchan lofted a single into shallow center field to plate Guthrie and Maton and make it 2-0. The next batter, Jorge Bonifacio, lined out deep enough into left field to score Williams and complete the early three-run assault in the first inning for Lehigh Valley. The IronPigs have scored a combined nine runs in the first inning so far this week.

From there, Syracuse (45-57) would settle in and start to rally its way back into the ballgame. The comeback began in the top of the fourth with two outs. Nick Plummer doubled to extend the inning off the top of the right-field wall, followed by a Gosuke Katoh RBI single that plated Plummer and made it a 3-1 game.

In the fifth, the Mets roared in front with three runs via another late two-out rally. Deven Marrero led off the inning with a triple, but he was in danger of staying there after Michael Perez struck out and Tzu-Wei Lin grounded out. Then, the IronPigs starting pitcher lost the zone, Christopher Sanchez walked the next three batters he faced (Francisco Álvarez, Dominic Smith, and Travis Blankenhorn) to score Marrero, make it a 3-2 game and keep the bases loaded. A new pitcher, Jonathan Hennigan, entered the game trying to settle the situation down and keep the IronPigs in front. He couldn’t do it as Nick Plummer grounded a single into center field to score Álvarez and Smith, propelling Syracuse to a 4-3 lead in the process.

It stayed a 4-3 game all the way until the top of the ninth inning, as the Mets found a bit of insurance on one powerful swing. Michael Perez pounded a pitch over the right-field wall, a laser-beam solo shot that made it a 5-3 game and a two-run cushion for Syracuse. It was the first hit for Perez as a Syracuse Met in three games. He was acquired by the New York Mets via a trade on July 23rd from the Pittsburgh Pirates.

It remained a 5-3 game entering the bottom of the ninth with Mets closer Bryce Montes de Oca entering the game hoping to earn his seventh save of the season. On this night, the normally over-reliable closer just didn’t have his best stuff. The IronPigs scored twice to tie the game and send it into extras. The inning started when Jorge Bonifacio was plunked by a pitch, and Will Toffey walked, putting runners on first and second with nobody out. Josh Ockimey came on as a pinch-hitter and nearly ended the game, pounding a pitch off the wall in right-center field for a double. The two-bagger scored one run and advanced Toffey to third with nobody out. Scott Kingery walked to load the bases, followed by a groundball to shortstop from Dalton Guthrie that scored Toffey, advanced Ockimey to third, put Guthrie on first and knotted the game up, 5-5, with one out. To the credit of Montes de Oca, he battled back to strike out the next two batters and ensure the game would enter extra innings.

In the top of the tenth, Syracuse plated a run to take the lead back at 6-5. Terrance Gore started the inning as the free runner at second base with nobody out, advancing to third on a Travis Blankenhorn flyout. Plummer then came to the plate and chopped a single into center field, scoring Gore to give the Mets a 6-5 edge and putting the capper on a great day for Plummer. The Michigan native finished the game 3-for-4 at the plate with two singles, a double, a run scored, and three runs driven in.

It was still 6-5 entering the bottom of the tenth, as reliever Phillip Diehl entered the game with the chance to earn a victory for the Mets. Yet, it wasn’t to be. Johan Camargo started the inning as the free runner at second base with nobody out, promptly moving up to third on a single from Justin Williams. Donny Sands, a pinch-hitter, then looped a ball into shallow center field that scored Camargo, tying the game, 6-6, and putting two runners on base with nobody out. Chris Sharpe then came to the plate and attempted to drop down a sacrifice bunt. He popped up the bunt, but it tipped off of Diehl’s glove, landed fair on the grass on the third-base side, and now meant the bases were loaded with nobody out in a tied game in the tenth inning. Toffey strode to the plate with the chance to be a hero and did so in unusual fashion. The former Vanderbilt Commodore drew a bases-loaded walk to end the game and hand Lehigh Valley a 7-6 win.

Syracuse continues its six-game series against the Lehigh Valley IronPigs on Friday evening at 7:05 pm Right-hander Connor Gray is slated to start for the Mets, opposed by left-hander Kent Emmanuel for the IronPigs.