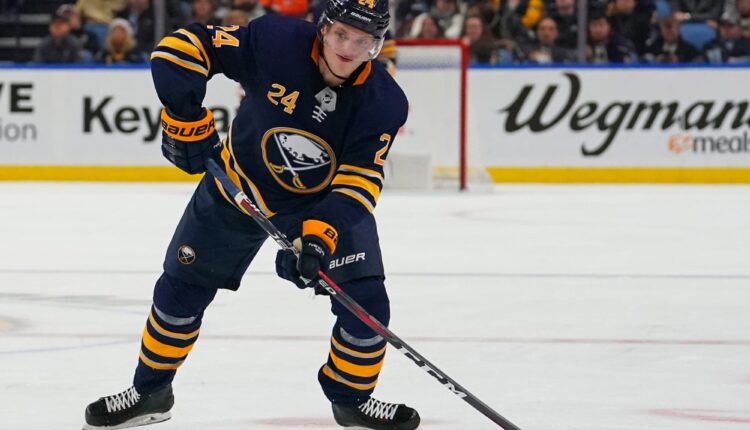 Lawrence Pilut is officially back with the Buffalo Sabers after signing a one-year, two-way prove-it deal worth $750,000. So, where will he fit in?

Now that Lawrence Pilut is once again part of the Buffalo Sabers organization, where does that place him in the defensive rotation’s pecking order? And although his rights remained with Buffalo, Pilut is the fifth defenseman Kevyn Adams signed in free agency, joining Ilya Lyubushkin, Kale Clague, Chase Priskie, and Jeremy Davies.

Pilut’s signing does bring a sense of clarity to the Sabers, however. We know he is going to enjoy a higher priority than Clague, Priskie, and Davies, but will he overtake Jacob Bryson and Casey Fitzgerald?

Where does Lawrence Pilut fit in the Buffalo Sabers organization?

Here is my early projection of the Sabers defensive pairings as of July 15th, 2022:

As you can see, I am not sold on Jokiharju taking the second pairing as much as most in Buffalo are. Kevyn Adams stated he wanted experience to team with Power, and Lyubushkin’s nine years of professional hockey experience in the NHL and KHL double Jokiharju’s.

However, while Pilut has the experience edge over Bryson as far as his combined time in the NHL and the KHL is concerned, the one-year prove-it deal states that Pilut will start things off behind Bryson and Fitzgerald. Though he will hold the advantage over Clague, the latter of whom I am very high on.

I also debated with myself regarding Bryson or Fitzgerald. But I went with Bryson as of right now considering his playing style differs from Lyubushkin’s while Fitzgerald’s mirrors it. However, if the Sabers want to get physical with opponents, something that was null at times last season, a third pairing of Fitzgerald and Lyubushkin would be ideal.

Overall, expect Pilut to start things off behind Bryson and Fitzgerald. But a strong camp and a strong showing in preseason might just bump him up to the third line. Yet, as the prove-it contracts state, Pilut is going to need to earn it.

Listen: Why Medical Debt Touches Every Corner of America