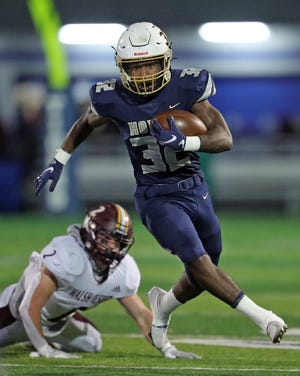 Lamar Sperling experienced about as much difficulty developing chemistry with the University at Buffalo coaching staff as he did evading defenders on the gridiron last season.

A standout tailback at Archbishop Hoban High School, Sperling announced his decision Saturday on social media after informing the Beacon Journal of his intent earlier in the week.

“I’ve been [to Buffalo] at least three times,” Sperling said. “I went to a camp, visited, went to a spring ball game. It’s pretty nice there. I know it gets cold, but I don’t like the heat that much. They’re a running team. They like to run a lot. The coaches are wonderful. They’re family already.

“The team, they push each other. They push the young ones. Having that bond with the running backs coach and even getting a little bond with the head coach was nice, seeing that they want me the most. I have conversations all the time. I connected with them from the jump.”

Sperling, 5-foot-8½ and 187 pounds, will begin his senior season at Hoban next month. Like Buffalo, St. Francis University, Notre Dame College and Grand Valley State University have offered him a football scholarship, he said.

Sperling has also received strong interest from the majority of Buffalo’s MAC foes, including Akron, Kent State and Miami, and he’s being monitored by Ohio State and Pittsburgh, Tyrrell said.

Tyrrell added he thinks Sperling “can play at any level” in college because of his skill set and work ethic.

“If it’s a spread offense that uses their back out of the backfield a lot, which a lot of schools do nowadays, he can do it,” Tyrrell said. “He’s 190 pounds. He’s not small. He’s a fat kid for his height. The hard part is some colleges that I think he’d fit in, they’re like, ‘We really need a big back. We have a couple small guys.’

“No, he’s not 6 feet, and he’s not 220 pounds. It’s one of the situations where we run a style of offense that’s a power offense, and he’s successful in it, but he can catch the ball, and he can do all those other things.”

In 16 games as a junior last year, Sperling compiled 2,943 rushing yards and 41 touchdowns on 385 carries (7.6 average), aiding Hoban’s journey to a Division II state runner-up finish. He added 17 catches for 239 yards and a touchdown. He completed his lone passing attempt, throwing for a 27-yard touchdown in a regular-season win over St. Vincent-St. Mary. He rushed for a career-high 354 yards and five TDs on 29 carries (12.2 average) in a regional final victory over Walsh Jesuit.

Now Sperling is hoping to help Hoban win his sixth state title in Tyrrell’s 10th season with the Knights, then excel in college.

“My goal playing at the next level is to stay focused, do what you have to do in school and on the field, get that playing time that you deserve, work and show people you can do it because there were a lot of people who doubted me,” Sperling said. “Hearing all of that, it just makes me even more dedicated.”

Catching up with Barberton Magics senior football player:Roosevelt Andrews determined to ‘get bigger, faster and stronger’

Nate Ulrich can be reached at [email protected]