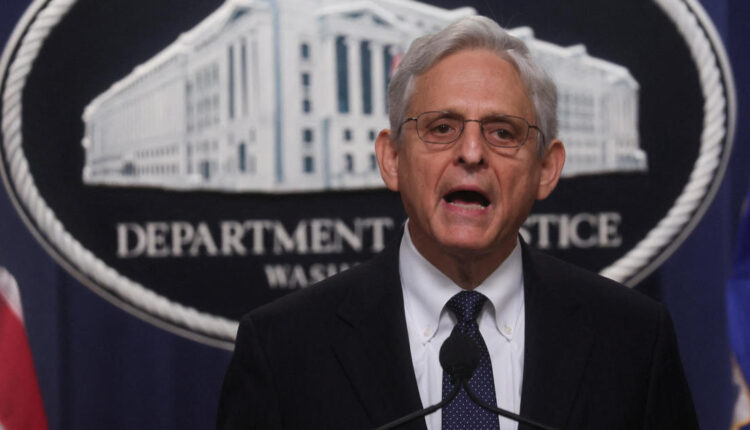 In brief remarks from the Justice Department as the government filed its request in federal court, Garland defended the move to have dozens of federal agents descend on Trump’s home at Mar-a-Lago, saying he “does not take such decisions lightly.” He noted, however, that he was bound by federal law, department rules and ethical obligations from providing more information about the basis of the search. CBS News has reported the search was related to an investigation into documents Trump took with him when he left the White House.

“Faithful adherence to the role of law is the bedrock principle of the Justice Department and our democracy. Upholding the rule of law means applying the law evenly without fear or favor,” he said. “Under my watch, that is precisely what the Justice Department is doing. All Americans are entitled to the even-handed application of the law, to due process of the law and to the presumption of innocence.”

The decision by the Justice Department to ask the court to make the warrant public was made “in light of the former president’s public confirmation of the search, the surrounding circumstances and the substantial interest in this matter,” Garland said.

Attorney General Merrick Garland speaks about the FBI’s search warrant served at former President Donald Trump’s Mar-a-Lago estate in Florida during a statement at the US Justice Department in Washington on Aug. 11, 2022.

He noted that the warrant was authorized by a federal court in South Florida “upon the required finding of probable cause,” and copies of the warrant and a list of property seized by the FBI — required by law to be left with the property owner — were provided to Trump’s attorneys on the day of the search.

One of Trump’s lawyers, Lindsey Halligan, confirmed to CBS News that she and a second attorney, Christina Bobb, a former television host for the far-right One America News network, were at Mar-a-Lago while the search was conducted.

In its filing in the US District Court for the Southern District of Florida, the Justice Department cited the “intense public interest” in the search of a former president’s residence to ask US Magistrate Judge Bruce Reinhart to unseal the search warrant and accompanying information, as well as the list of seized items, “absent objection from the former president.”

“The press and the public enjoy a qualified right of access to criminal and judicial proceedings and the judicial records filed therein,” wrote US Attorney Juan Antonio Gonzalez and Jay Bratt, head of the Justice Department’s counterintelligence and export control section. They added that the “public’s clear and powerful interest in understanding what occurred under these circumstances weighs heavily in favor of unsealing.”

Reinhart, the judge, quickly ordered federal prosecutors to confer with Trump’s attorneys and determine whether they oppose the motion to unseal the warrant and related documents, setting a deadline of 3 pm Friday for the Trump team’s response.

The New York Times and Times Union of Albany, New York, along with the conservative organization Judicial Watch, filed separate requests with the court on Wednesday to obtain access to all documents — including any underlying affidavits — related to the search warrant. CBS News on Thursday requested to join the Times’ effort to make the search warrant and other related materials public.

Garland’s comments came amid increasing pressure from Republicans to address the search by the FBI at Mar-a-Lago. The former president revealed the search, and sources confirmed to CBS News that it was connected to a Justice Department investigation into Trump’s handling of presidential records. In January, the National Archives and Records Administration retrieved 15 boxes of presidential records, some of which contained classified national security materialfrom Mar-a-Lago, and asked the Justice Department to investigate.

During the search, the FBI took boxes and documents, two sources confirmed to CBS News, and no electronics were taken. One official said some or possibly all of the seized records contained classified information.

Sources familiar with the matter told CBS News on Thursday that a federal grand jury issued a subpoena related to the document investigation in the spring, before Justice Department officials met with Trump attorneys at Mar-a-Lago in June regarding the records. The online news outlet Just the News first reported the existence of the subpoena.

Trump and his GOP allies were quick to denounce the unprecedented search, claiming without evidence that it was a politically motivated attack against a likely challenger to Mr. Biden in 2024. House Minority Leader Kevin McCarthy voted to investigate the Justice Department if Republicans win control of the House in the November midterm elections, telling Garland in a tweet to preserve records and prepare to testify next year.

But Garland defended the department from the attacks by Republicans about its credibility and independence.

“I will not stand by silently when their integrity is unfairly attacked,” he said. “The men and women of the FBI and Justice Department are dedicated, patriot public servants. Every day they protect the American people form violent crime, terrorism and other threats to their safety, while safeguarding our civil rights.”

The White House did not know in advance that Garland would be delivering a statement, and officials learned of it through news reports, a White House official told CBS News ahead of his remarks. President Biden left Washington on Wednesday for a vacation to Kiawah Island, South Carolina.