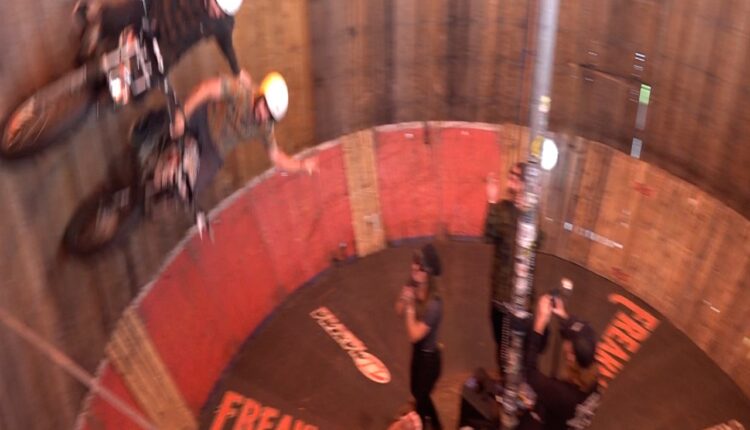 STURGIS, SD — Kyle and Cody Ives are keeping a tradition alive with a name that’s a little daunting.

While you’re out and about exploring what’s at the Sturgis Motorcycle Rally or the Buffalo Chip throughout the next two weeks, look for the “Wall of Death” and you’ll find the Ives Brothers there.

Watching from the top of the wall, you’ll notice the comfortability between two brothers. That’s what happens when you’ve been performing for more than a decade with your sibling.

“Being so close in age and being kind of not just brothers, but good friends our whole lives growing up, it’s just like two brains into one. So when we ride together, we know of what we’re capable of,” Cody Ives said.

They’re following in the tire tracks of their father who got them started and that’s where the business took off.

“Most of the people that do this kind of tradition for a living are a family-based business,” Kyle Ives said.

The Ives brothers are performing an act that’s gone on for generations. In fact, many have approached them explaining that fact.

From the memories their fans share, to even bikes that they’ll give to the brothers to help them keep it going, the family only keeps growing.

“We kinda got like a little family fanbase all over the country that we can stop in and visit, and kinda have those home-cooked meals and have those cool family stories and stuff like that, without always feeling like you’re living in the hotels and traveling,” Cody Ives said.

As for what revs the brothers up, the crowd seeming that, as Kyle puts it, outperforms the pay that comes with the job.

“[There’s] definitely a lot of cool interactions with the crowd and people that come up,” Cody Ives said.

“Just the experience of life that this thing has brought to us is what makes us rich,” Kyle Ives said.

You can catch the Ives Brothers over the next couple of weeks at the Buffalo Chip.