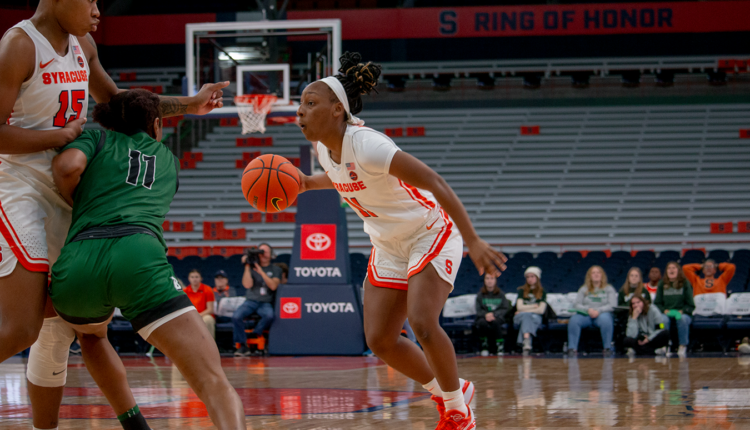 As the Conference table rolls on, Syracuse saved two of its highest-scoring games for Atlantic Coast Conference opponents. The Orange totaled 89 and 91 points in their respective wins against Pittsburgh and Clemson and will travel to Boston College Thursday night.

In defeating the Panthers, SU’s Dyaisha Fair and Georgia Woolley each recorded over 20 points. Meanwhile Syracuse Five players scored double digits and went on a 24-1 run against the tigers.

But while Pitt and Clemson have combined just two ACC wins, the Eagles have an identical conference record as the Orange and have lost just two games since early December.

When the Eagles last came to the Dome on February 27 last year, SU was in the absolute doldrums. The Orange were just about to end their season in a six-game losing streak continued by Boston College. The Eagles broke Syracuse’s full-court press, hitting 10 shots from the arc and scoring 58 points in the first half en route to a 91-75 win.

At the other end of the floor, Teisha Hyman and Chrislyn Carr scored 22 and 20 points, respectively. Hyman also led the team in assists, free throws and steals, slowing the Eagles off the pace for a while to bring Syracuse back to a 13-point lead in the fourth quarter. But the 34-point lead the Eagles had built up by half-time was too much for the Orange to overcome. After losing the regular season finals, Syracuse lost to Clemson in the ACC tournament by 19 points.

In Boston College’s first 16 games, it had won all of its games against weaker ACC and non-conference opponents, but was dominated by the conference’s top-tier teams. Against then-no. 7 Virginia Tech and then no. 5 Notre Dame, the Eagles lost by 52 points combined. But after its 37-point loss to the Fighting Irish, BC bounced back with a 79-71 win over then-No. 9 NC State in Raleigh. Boston College then defeated Florida State 77-71 three days later at Chestnut Hill.

All five of Boston College’s routine starters — Andrea Daley, Dontavia Waggoner, Maria Gakdeng, Jojo Lacey and Taina Mair — all have 10-plus point averages and could cause trouble for the Orange.

But in the fifth year under head coach Joanna Bernabei-McNamee, the Eagles were on the right track both offensively and defensively.

Boston College’s man-to-man defense will wreak havoc for the Orange and could prevent rebounding presences like Dariauna Lewis from getting underway. But the Eagles’ matchup against Georgia Tech on December 18 may provide a blueprint for success.

The Yellow Jackets had numerous players wide open in the corners. SU guards like Dyaisha Fair and Georgia Woolley have routinely displayed both a willingness and ability to shoot from corners and take 3-pointers. As Boston College gears up to defend those corners, finding Teisha Hyman will be crucial as she can find plenty of open spots on the wing.

Daley, Waggoner and Gakdeng all average more than five rebounds per game, resulting in an offensive rebound rate of 40.7%, which is good for the 12th-best spot in the nation, according to Her Hoops Stat. Of their 18 games, the Eagles had just two times fewer offensive rebounds than their opponents. Along with that rebound trio, fellow starters Mair has also been picking up five boards per game.

Waggoner goes into their matchup with the Orange with back-to-back games scoring over 20 points, including 23 against NC State and 21 against Florida State. Despite being listed as a guard, her scoring prowess comes from the 3-point arc, having only made three 3-point attempts all season.

Suffolk County hands out $25 million in grants to drug treatment programs, according to Steve Bellone