Instead of free throws, the goal for the substitution fuels Syracuse’s win over Pitt 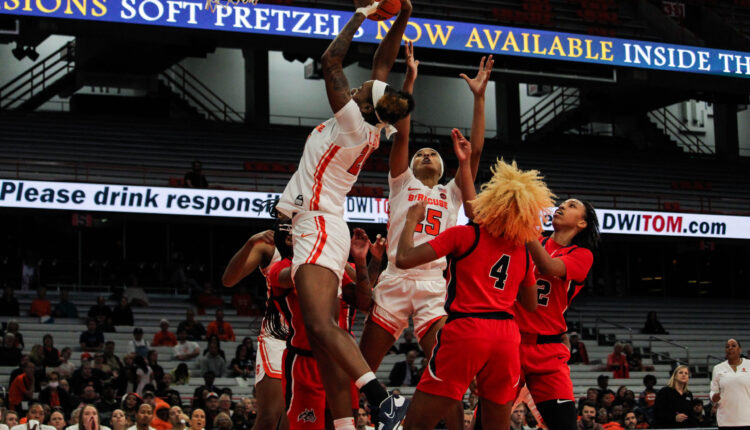 With two shots hit from the charity strip and just over seven minutes remaining, Georgia Woolley scored the Orange’s first free throws of the night. The problem wasn’t that Syracuse was missing free throws, that would mean he was going to the foul line.

Woolley’s two free throw attempts were the Orange’s first of the night. This was the first time this season that they completed the first three quarters without a try from the free throw line.

SU previously had to rely on free throws to win several close games. But against Pittsburgh (7-8, 0-4 Atlantic Coast), Syracuse (11-4, 2-2 ACC) found a new way to score in their 89-71 win – the fast break. In a game in which they recorded the fewest free-throw attempts of the season, the Oranges had 31 transition points, the most points they have scored at fastbreak all season.

When Syracuse came back against Yale on December 4, there was a one-way free-throw differential between the two teams. By the end of the third quarter, there were 27 total free throw attempts and the game ended on 30 while Yale scored just four attempts from the charity streak. Two games later against Wake Forest, SU made 20 shots from the charity streak on 24 tries.

But even when the Orange made half of their shots in the first quarter, they got much of their success from outside shooting. Over half of the SU marks came from jumpers or 3-pointers. One of the most prominent centre-forward hybrid players in the squad, Dariauna Lewis started hitting shots from a distance rather than attacking the basket and making contact.

“We didn’t bat,” Syracuse head coach Felisha Legette-Jack said of the team’s first-half attack. “We didn’t punch in (Pittsburgh’s) zone, we didn’t make an impact. We didn’t score a free throw in the first half.”

Instead, Lewis – like the rest of their teammates – helped Syracuse score by creating fast break opportunities. With just six minutes left of the opening frame, Lewis had both hands up as she played a smothering defense against Pitt’s Liatu King. The Panther forward had to throw a bounce pass that landed in the hands of Woolley, who quickly moved the ball across the floor.

Before passing the 3-point arc, Woolley twisted and turned to find an open Teisha Hyman. Hyman then stopped sprinting down the court and knocked down her first jumper of the game. On another fast break in the second quarter, Woolley sent a pass to Alaina Rice, who hit a 3-pointer from the right wing to make it a 10-point play.

Woolley also provided the Orange with the team’s top five steals, opening up even more scoring chances in the transition phase. A little over four and a half minutes from the end of the first quarter, Woolley got his hands on a pass from Pittsburgh’s Channise Lewis. Before Lewis’ teammate Amber Brown could get the ball, Dyaisha Fair came in to gain possession and score an easy, uncontested layup on the fast break.

“When I got those steals, we were playing together and moving around,” Woolley said. “And then I could skip the lanes and get the steal.”

But the Panthers continued a 19-2 goal streak in the final five minutes of the second quarter to regain the lead at half-time. Syracuse’s outside shots, which had worked early, stopped falling in the second half of the second quarter. And since the Orange didn’t even make it to the foul line in the third quarter, they continued to rely on the fast break.

The Orange came back second behind Fair’s 22 points in the last 20 minutes. Over a four-minute span midway through the third quarter, Syracuse went on a 12-5 goal run, and part of that success came from the fast break.

At the 4:30 mark of the quarter, Brown charged the tire and made contact with Hyman. While Hyman fell behind and couldn’t pull an offensive foul, Brown lost control of the ball, which was picked up by Fair. At the other end of the floor, Fair then sent a deft pass to Woolley, who buried the 3-pointer in the corner to level the game.

By the end of the third quarter, SU was six points ahead and only extended their lead with a 15-8 run in the first half of the last frame.

Midway through the fourth quarter, Lewis Pitt’s Maliyah Johnson blocked hard, setting up another fast break for the Orange. The ball eventually made its way to Kyra Wood, who pushed inside and hit with a layup. This gave Syracuse a 72-61 lead, forcing Panther head coach Lance White to take a timeout.

As the Orange secured their second conference win of the season and tied the overall win from the 2021-22 season, Wood emphasized the defensive energy that led to success in the transition.

“We keep the ball up and get lucky and get the steal or the deflection and then we come out with fastbreaks.”

Man reaps fruits of his labor through accessible wine shop