I searched Google Patents for the toilet paper patent 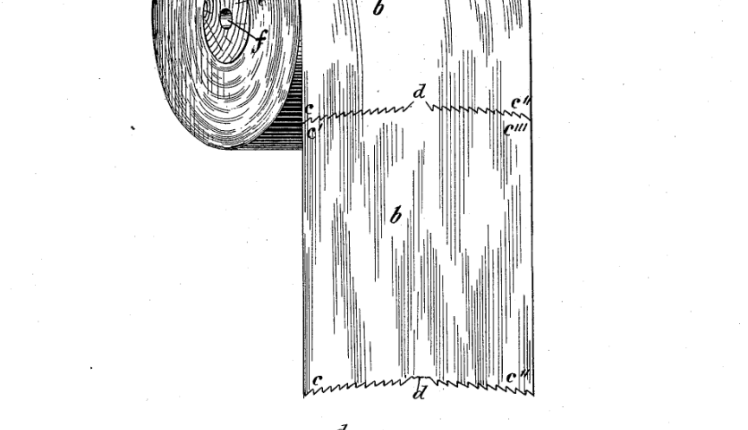 Did you know that Google has a search engine where you can search for patents? It’s called “Google Patents” and is a place where you can “search and read the full text of patents from around the world,” according to the site.

Of course I had to try it. What was I looking for? Well, of course, like any sophisticated Gen Xer, I was looking for the toilet paper patent. Here’s what I found. It has patent number US465588A and was granted to Seth Wheeler of Albany, New York on December 22, 1891. While others had toyed with perforated paper rolls a few years before Wheeler, his patent appears to be the first to refer to rolls of paper specifically intended for toilet use. Here is an excerpt from Wheeler’s patent application:

My invention consists of a roll of connected sheets of paper for toilet use, the roll having cuts at intervals extending from the side of the web towards the center but not meeting and terminating at an angle whereby the easy connection can be left without injury of the connected sheets are separated. A difficulty with rolls of this type, as heretofore made, has been due to the width of the binding joining the sheets, which had to be made of considerable strength to withstand the tension of winding, but which desirably should be long enough to when the roll is unwound, otherwise the sheets will not separate safely and many of them will be torn. Attempts have been made to remedy this by making cuts in the binding which should not weaken it in the longitudinal direction; but such incisions are of little use unless the leaves are being drawn in a definite direction, a condition of which the user seldom considers or is aware. In my improved reel, I overcome this entirely by reducing the binding and ending the side cuts in an angle cut, eliminating any risk of blade injury upon separation. With this construction, one sheet can be separated from the next without the incisions rotating in a direction parallel to the web and tearing a significant part of the continuous sheet. At the same time I wind rolls with any number of sheets.

Thanks, Seth, for improving the reel and removing any liability for blade damage during separation. Thanks also for the illustration which should answer any questions about which direction the scroll should face.