Hochul says no mask mandate at moment, COVID review in the works 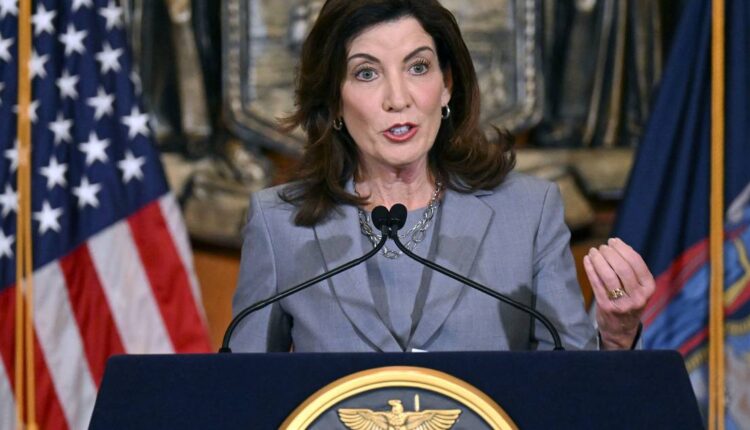 ALBANY — New York is prepping for a potential fall surge in COVID cases when schools reopen by stockpiling tests and keeping mask mandates on the table, Gov. Hochul said Wednesday.

“We need to be cognizant of what could be our future,” the governor said during a Manhattan press conference. “If anything, this pandemic, COVID, has taught us that preparations are the key to, literally, survival.”

Hospitalizations and infections are already on the rise in the Empire State thanks to the BA.5 subvariant of omicron, which has proven to be particularly good at evading protections from vaccinations and prior infections.

The state has stockpiled over 20 million at-home tests that are ready to be distributed as needed when students begin returning to classrooms and Hochul said that mask mandates could also return if infections surge.

“We don’t currently, based on today’s numbers, anticipate the need for masks in classrooms, but I’m going to reserve the right to return to this policy if the numbers change, the circumstances change,” she said.

Health officials encouraged anyone over 50 to get a COVID booster shot if they have yet to receive one this year to help protect them against infection.

The push comes as Hochul revealed the results of a public survey that found 90% of New Yorkers feel “neutral to very safe” with regards to COVID despite rising numbers.

The statewide hospitalization rate is currently around 12 per 100,000 and New York recorded another 22 COVID deaths on Tuesday, according to health officials.

New York’s current infection rate is around 37 per 100,000, relatively low when compared to the 381 per 100,000 recorded at the height of the Omicron surge earlier this year, Hochul noted.

“We’ve seen the past, and the past can become the present if we don’t take the steps necessary now,” the governor said.

New York is also soliciting proposals for a pandemic policy review to study how the state handled the COVID crisis, something that critics have long called for and Hochul promised would happen shortly after she took office last year.

The review will focus on state policies that affected schools and businesses, as well as controversial rules that impacted nursing homes and prisons, during the peak of the pandemic.

“I want to make sure we are very intentional about this, have a broad scope to what we are doing and have a real blueprint so that it is useful to us,” Hochul said.

A request for proposals will for the “After-Action Review Board” will be issued soon and Hochul said she expects initial findings to be completed in six months and a completed review will be ready some time next year.

The governor also shot down concerns about recent reports about donation campaigns made by a family that runs a company that received a no-bid contract for COVID tests.

“I was not aware of that this was a company that had been supportive of me I don’t keep track of that,” she said.