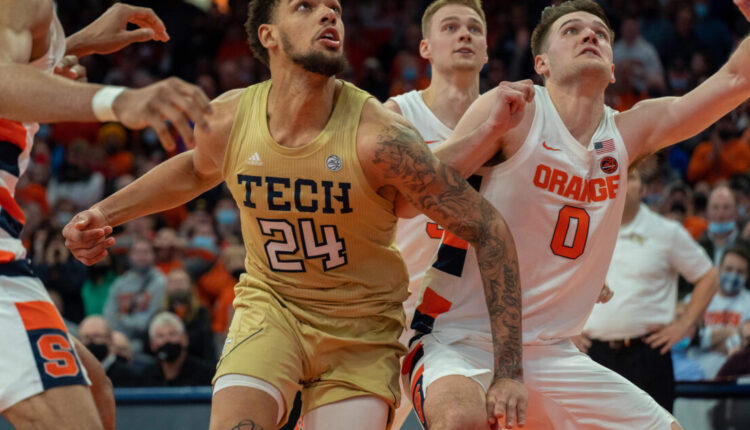 By Andy Demetra | Voice of the Yellow Vests

Josh Pastner arrived at Georgia Tech as a man-to-man absolutist. In seven years as an assistant at Memphis and Arizona and seven years as Memphis head coach, his teams played sternly and unwaveringly hand-to-hand.

Fast-forward another seven years, and Pastner’s Georgia Tech teams are now known for their bewildering mix of zone defenses, full of different fronts and unorthodox slides and rotations. He and his staff installed the system ahead of their debut season in 2016-17 because they believed it could fill a talent gap. The Yellow Jackets finished the year in sixth place nationally for defensive efficiency, and Pastner has no regrets.

The pendulum hasn’t completely swung the other way; Tech still plays a lot of hand-to-hand depending on the matchup. But coaches are now texting and emailing Pastner at tournaments and camps, asking him to teach his system. They have tried in vain to figure out the Byzantine rules themselves, to no avail.

Good luck with it. Pardon the pun, but Pastner guarded it closely.

“This summer, four people came up to me and told me you were like the zones’ new John Chaney,” he said on his radio show last month, referring to the legendary former Temple coach’s 2-3 matchup zone.

Despite his 8-10 start, Pastner still feels elated on his team’s defense. Offensive, as he often said, remains the problem. “We have to keep working on it,” Pastner said at his press conference on Friday. And now Tech will look to score against the most famous, synonymous and infamous team for his zone defense, the Syracuse Orange (12-7, 5-3 ACC), coming to the McCamish Pavilion on Saturday.

Enjoy the top reads from my chart as the Jackets attempt to wrap up a three-game home stand with one win (12 p.m. ET, Georgia Tech Sports Network by Legends Sports):

The most notable change in Syracuse’s offense? The Orange are second in the ACC on three-point percentage in conference play (38.3 percent), but they rely on the three far less than they have in years past:

The Orange still has guard Joe Girard III (team-high 16.9 ppg), who ranks fifth in three-pointer career in school history and switched to shooting guard this year. The 6-1 senior flies around curls, misdirections and pindowns and has a lightning-fast release. He’ll also be looking to regain his accuracy, having shot just 2 of 13 from three-point range in the last two games. 6-foot-7 rookie Chris Bell and 6-6 rookie Justin Taylor have also emerged as three-point threats. But freshman guard Judah Mintz, the Orange’s second-best scorer (14.9 ppg), is proving to be more of a pace rider. Center Jesse Edwards (1.80m, 11.0 rpg), who posted a career-high 25 points against Miami on Monday, gives the Oranges the gentle luffing threat they’ve lacked in recent seasons. Even Girard will field defenders low on the edge to give in and pull ups.

According to ShotQuality, Syracuse ranks sixth nationally for the percentage of its shots that come from midrange jumpers. The Jackets need to keep their “stick hands” up, have disciplined close-outs, and not collapse on straight drives like they sometimes did against Pitt and NC State. Watch for Mintz to come out focused after hitting a season-low three points (with five turnovers) against Miami. Can Tech also win the “first chance” defensive rebounds that could trigger his transition offense?

The wolf pack ranked ninth nationally in terms of turnover rate. Their 21.2 percent rate against the Jackets was the second-highest of the season. 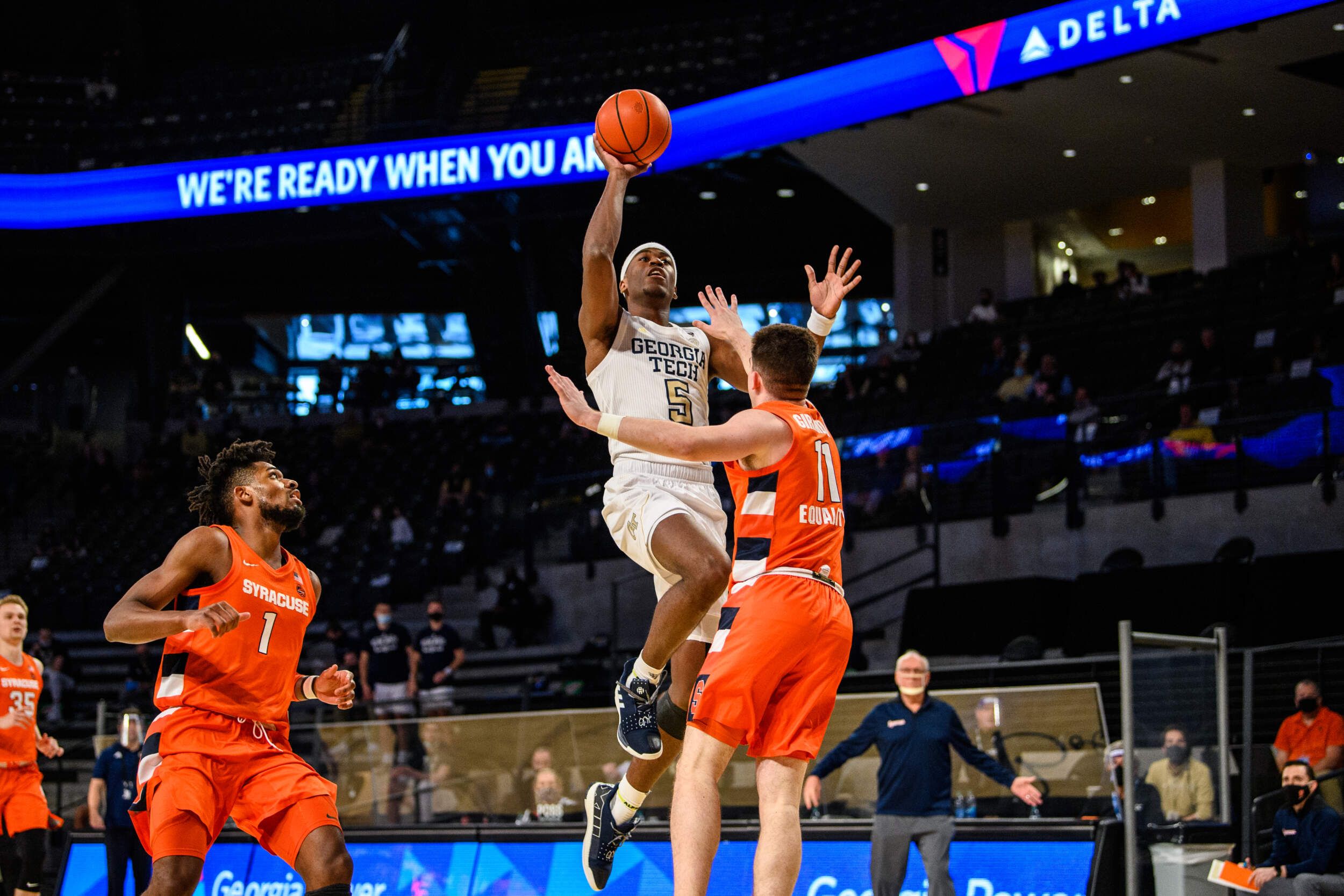 On the surface, it appears Tech was ill-timed to take just two of 21 three-pointers against NC State. Conventional wisdom, if not cliché, is that teams of three must shoot well to beat a zone.

But as they struggled from afar this year, the Jackets have shown an encouraging ability to hit back in the next game. A few recent examples:

Three-point shots won’t be the only thing Tech will have to do well against the Orange. allowed to Rodney Howard, who had a career-high 19 points against Syracuse last year, be assertive in the alley? allowed to Jalon Moore Catch-and-rip off the high post and finish through contact, especially with the ACC’s lead shot blocker in Edwards lurking underneath? When Tech elbows a guard, someone may like that Kyle Sturdivant, who’s got an insidious midrange knack for rolling up soft sweaters? Technicians need to get consistent paint touches and not stare at passes against the Syracuse zone — the Oranges crawl and recover well, and they like to use their length to bounce passes from point to wing.

Some potentially good karma strolled into the McCamish Pavilion on Friday.

Former ACC Player of the Year Moses Wright, on a 10-day break from his season with Chinese Basketball Association leaders Zhejiang, paid a visit to Georgia Tech’s afternoon practice session and will attend Saturday’s game. Wright averaged 32.0 points and 13.0 rebounds in his last two games against Syracuse.

Now that we’re prepared, we hope you are too. Catch pre-game coverage from 11:30 a.m. on Legends Sports’ Georgia Tech Sports Network. I’ll see you at McCamish’s.

The Alexander Tharpe Fund is the fundraising arm of Georgia Tech Athletics and provides scholarships, surgeries and facilities for Georgia Tech’s more than 400 student-athletes. Join the development of Georgia Tech’s Everyday Champions and help the Yellow Jackets compete for championships at the highest levels of collegiate athletics by supporting the Annual Sports Scholarship Fund, which directly awards scholarships to Georgia Tech student-athletes. To learn more about supporting the Yellow Jackets, visit atfund.org.

The Georgia Tech men’s basketball team has completed six seasons under head coach Josh Pastner, won the Atlantic Coast Conference championship in 2021 and played in an NCAA tournament for the first time in 11 years. A member of the Atlantic Coast Conference since 1979, Tech has won four ACC championships (1985, 1990, 1993, 2021), played 17 times in the NCAA tournament, and played in two Final Fours (1990, 2004). Connect with Georgia Tech Men’s Basketball on social media by liking their Facebook page, or by following them on Twitter (@GTMBB) and Instagram. For more information on tech basketball, visit Ramblinwreck.com.

Three from Holbrook charged in burglaries at Dunkin’ stores, other local businesses