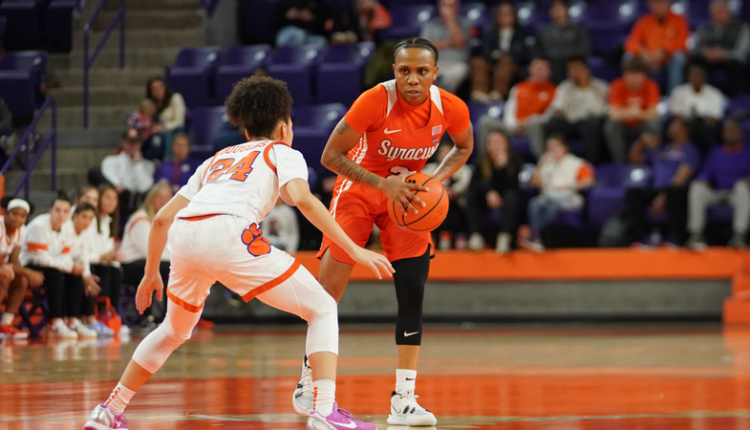 A strong performance in the second quarter and 27 points from senior guard Dyaisha Fair propelled Syracuse women’s basketball to a 91-77 away win over Clemson. Five Orange finished in double digits for the first time since the 2021-2022 season.

Along with Fair, who tied her Syracuse career high on points, Teisha Hyman and Georgia Woolley both added 14 points. Woolley also contributed a season-high six steals against the Tigers. The frontcourt duo of Dariauna Lewis and Asia Strong also posted double figures as Lewis posted 12 and Strong 13.

HOW IT WAS DECIDED

After the media break, Syracuse dominated the closing moments of the first half. A midfield jumper by Fair 5:09 at halftime sparked a 16-1 run for Syracuse, allowing head coach Felisha Legette-Jack’s team to go into the dressing room eight points clear.

When play resumed in the third quarter, the Oranges continued to be successful on offense. Back-to-back threes from Fair and a mid-range shot from Hyman extended the run to 24-1, increasing Syracuse’s lead to 16, 53-37. Clemson stopped the run with a 3-pointer two minutes into the third quarter.

The Tigers rallied in the fourth quarter and used a 10-0 run to cut Syracuse’s lead to four at 4-12 in the game. The Orange secured victory with a 10-2 run when Strong converted two free throws for the game’s final points.

“It felt great to come together as a unit,” said head coach Legette-Jack after the ACC’s first away win of her tenure in Syracuse. “If nobody cares who gets the credit, anything can happen. Five children in the double digits. Georgia Woolley was incredible. Teisha Hyman has shown to all the naysayers that she is our true point guard and can get her business done. So proud of her. ”

Clemson utilized a half-court press and was able to choke out the Syracuse offense, limiting the Orange to a 14% 3-point field goal percentage in the first quarter. The Tigers also managed five turnovers in the first ten minutes, which allowed the hosts to jump to a 27-20 lead by the end of the first quarter.

In the second quarter, Syracuse flipped the script to the aggressive Tigers. The Orange outplayed Clemson in the second, 25-10. Syracuse tightened their defensive play, limiting Clemson to a 4-17 shooting performance and a 14% 3-point field goal percentage. ‘Cuse capitalized and went into the second half on a 16-1 run to take a 45-37 lead.

Syracuse’s aggressive and consistent rebounding was a deciding factor against the Tigers. The Orange registered 50 rebounds, 16 more than Clemson’s 34. Lewis and Strong both led ‘Cuse on the glass as each had 10 rebounds.

Syracuse remains on the road for a matchup against Boston College on Thursday, January 12. Tipoff is scheduled for 7pm and the game will be streamed live by ACC Network Extra.