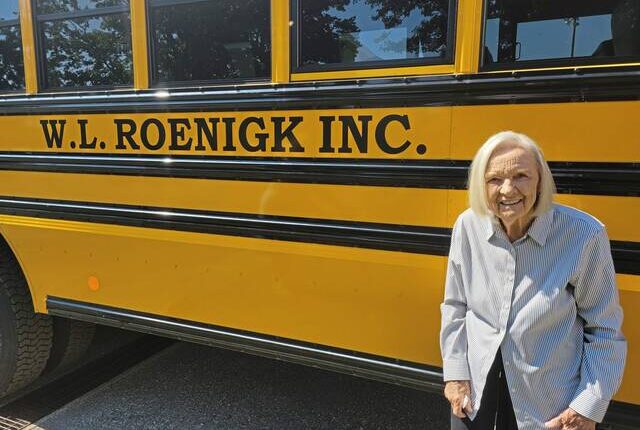 When Jeanne Roenigk is asked about retirement, she responds with a simple question.

Her longevity with WL Roenigk is the reason the family-run bus company continues to thrive 77 years later.

Having the company headquarters based on the first floor of the Ekastow Road home where she raised her family keeps her engaged in the business.

Roenigk got her start with the company when she took over the bookkeeping in 1954. Things look a little different nowadays, as three generations of the Roenigk family help run the company.

Roenigk is joined by her daughter, Sue, who started working for her in 1978. They are joined by Jeanne Roenigk’s other daughter, Nancy. Sons Mike and Dave also work for the company.

Sue Roenigk described working with her mother as an interesting experience.

“We both have strong personalities,” she said.

An estimated 500 employees work for the company across its 10 locations.

While the business has managed to thrive, Sue Roenigk said the beginning of covid was a confusing time for the company, as it had to pivot to new cleaning and sanitation methods while monitoring schools.

“We’d plan for one thing, and then the next day something would change for the schools,” she said.

For its 75th anniversary, WL Roenigk was honored by the Pennsylvania School Bus Association during its convention June 27. The anniversary was going to be recognized by the association in 2020, but covid prevented it from happening, Sue Roenigk said.

“I was happy to see my mom finally get the recognition she deserves,” Sue Roenigk said. “She has always stayed in the background.”

Retirees make up the majority of the company’s employees, and Sue Roenigk said most employees who started working for the company have stayed.

Jeanne’s nephew, Ben Roenigk, has worked for the company for 50 years, mostly as a bus driver before assuming a manager’s role. His wife, Bobbie, drives buses, too.

Ben worked at a riding stable before his aunt asked him about getting a bus driver’s license.

“It has grown great. It’s better than ever now, I would say,” he said.

Beth Gault, an administrative assistant, said the company is like her second family. She has worked for WL Roenigk for 30 years and shares an office with Jeanne Roenigk.

There is always something new to do every day, she said.

“She makes this place what it is.”

Tanisha Thomas is a Tribune Review staff writer. You can contact Tanisha at 412-480-7306, [email protected] or via Twitter .