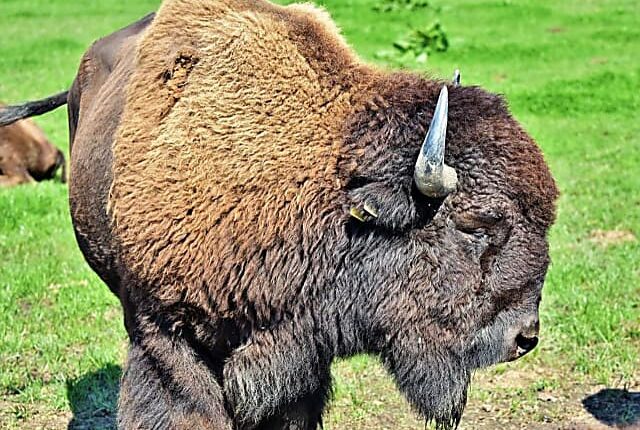 A pregnant buffalo who was expected to deliver her first baby in a couple of months was found shot dead, northwestern Pennsylvania farmers tell Daily Voice.

Her name was Pinky Tuscololo, because of her pink tongue, which the owners of Beautiful Beastly Creatures Farm tell us is very unusual for a buffalo.

The farmers love their buffalos and raise them for riding and as pets, Cindi (Fosburg) Miller explained in an email to Daily Voice.

“We got her when she was just a baby with her sister Leather. Leather has been mourning ever since the incident. It’s very sad to hear her cries,” Miller says.

The farmers began searching for Pinky when they did not show up to be fed at the farm on Mickle Hollow Road in Bloomfield Township around 6:30 am July 15, according to the Pennsylvania state police.

Pinky was found about five hours after she had been shot, the family tells us.

Through an investigation, it was determined she had been shot with a rifle and later died from her injuries, PSP stated in a release.

“We currently have 11 buffalo in our herd including 2 white ones. My husband got his first buffalo over 15 years ago,” Miller says.

Her husband Lee Miller is extremely upset by the killing, especially how it has affected the rest of the herd, writing in a Facebook post reading in part: “I DONT HIDE BEHIND A GUN AND FUCK WITH PEOPLE LIKE A COWARD!” Adding, “Our herd is tight knit and they are all upset and agitated”

“The manner in which our pet was killed indicates it was most likely someone who has done this before,” she says.

She hopes that the killers potentially bragging about the shooting will help police make an arrest.

No suspects have been identified as of 5 pm Friday, July 29, according to the police and the family.

“We are offering a $3000 reward for information that convicts these bastards!” Fosburg tells Daily Voice

The Millers added that they are also so thankful to the community for its support.

Anyone with information regarding this deadly shooting is asked to contact the Pennsylvania Crime Stoppers Toll-Free at 1-800-4PA-TIPS (8477) or on-lineor contact PSP Cory at 814-663-2043.