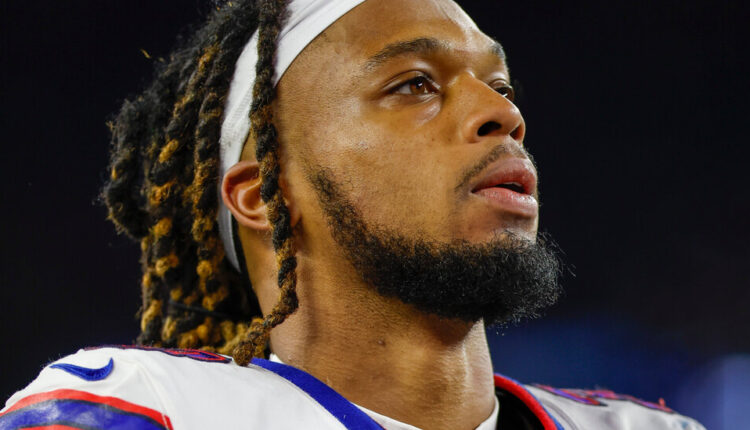 On Tuesday, the team said Mr Hamlin remains in intensive care and is in critical condition. At the same time, local elected officials reminded residents of crisis hotlines when the barrage of bad news had become simply overwhelming.

A flood of “enough already” swept online, where many Buffalonians, both current and former, were praying for both Mr. Hamlin and their hometown. On Twitter, the hashtag #Buffalostrong — a catchphrase following the Tops supermarket mass shooting in May — was back, albeit worn from overuse.

“Buffalo is strong,” Michael Benny, a local news anchor, said on Twitter. “But this is all too much.”

The vigil over Mr Hamlin’s health came even as the city was still rocked by last month’s “unique” snowstorm, which brought gale force winds and blinding snow into the city, trapping some victims in their cars and freezing others on streets and in snow banks.

Days later, a New Year’s Eve fire ripped through a house in the northeast of town, killing five children, none older than 10 years. Only one infant was spared.

Lisa Balderman, 38, a Buffalo-native psychotherapist, said she believes many Buffalo residents and Bills fans are suffering “vicarious trauma” from the spate of horrific events, noting that the region is also grappling with the effects of Covid -19 that left thousands dead in Erie County alone.

“Add the layers of recent events that have happened specifically in Buffalo — a mass murder, a deadly snowstorm, and now the development of a major medical crisis — and there’s a gravity,” she said, adding, “The needs of our… Mental health communities matter right now.”