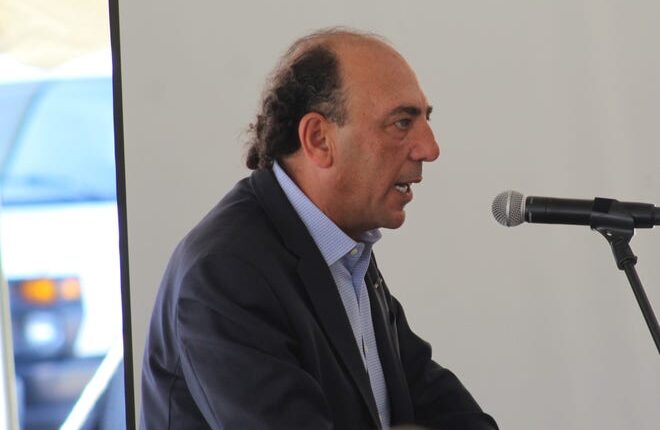 CLYDE — Evergreen celebrated the completion of its long-anticipated addition Friday, as the company looks to ramp up recycled polyethylene terephthalate (PET) plastic production capabilities at its Clyde facility.

Omar Abuaita, CEO of Evergreen, told company employees and local officials that there are four new extrusion lines in place with the $22 million project to keep up with demand for recycled PET.

With the addition, the Clyde plant will be the largest PET resin producer in North America, Abuaita said.

He said Evergreen wants to grow and is recycling materials that would otherwise end up in rivers, oceans and landfills.

The Evergreen CEO appealed to state legislators to help the company continue its growth.

“There’s plenty of plastic in Ohio. We just need to collect it,” Abuaita said.

Abuaita said there were two more lines going online in a second phase.

Evergreen’s expansion began in August 2021 as a $22 million project with three lines and evolved due to increased customer and consumer demand for recycled PET plastic, according to the company.

The 54,000-square-foot addition gives Evergreen the capability of processing 11.8 billion bottles a year resulting in a local capacity of 113 million pounds of food grade PET per year.

The company broke ground on the Clyde addition in May 2021.

“I think we’re doing something to better the world,” Abuaita said.

This expansion has resulted in the addition of 20 manufacturing and management jobs in the Sandusky County region.

At the May 2021 groundbreaking, Greg Johnson, the company’s vice president of operations, said the Clyde plant employs 140 people at its existing 238,000-square foot facility, which opened in 1998.

Evergreen’s last expansion in Clyde took place in 2011, Johnson said, with a 65,000-square-foot addition to the plant.

Johnson said the 20 additional jobs would be material handling and machine operator positions.

Johnson gave visitors to Friday’s celebration a brief tour of the new addition and ran through the process of converting materials into recycled PET.

“One of the great things about PET is it’s one of the few polymers that can be fixed and reconstructed,” Johnson said.