Close-up from Suffolk: A Ukrainian family finds refuge in the East End 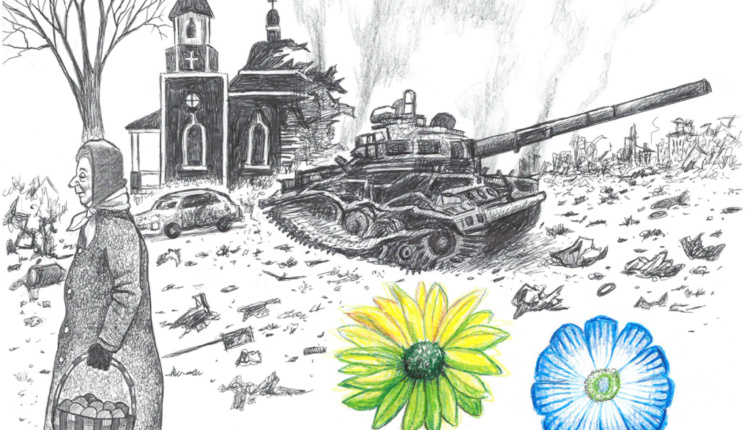 The year 2022 was overshadowed for me, and I’m sure for many others in Suffolk and the United States – indeed around the world – by Russia’s invasion of Ukraine. I felt it deeply as I have been to Russia many times.

“Russian Missiles Plunge Millions into Cold Darkness,” read the headline of the New York Times front page one day last month. The subtitle: “Ukrainians ask for relief as fears of a new offensive mount.” Another subtitle: “Cuddle from warmth”.

The next day, the Times published a large photo in the top left corner of its front page with the headline “Moments of Unspeakable Sorrow.” It showed two elderly people at the door of their bombed-out house, the man crouching and holding his head, the woman crying.

The caption continued, “Following an attack in Kherson, the horrors of war in Ukraine take on a deeper meaning when viewed up close.”

It directed readers to an inside page with photos and narration, which included: “In another badly damaged house, paramedics carried out a bedridden 85-year-old woman, Lyudmila.”

How can a nation of intelligent people with a love of poetry, music, dance and literature become embroiled in a murderous, barbaric attack on their neighbor’s populace? The reason for this is Vladimir Putin, the former KGB colonel who is now power-soaked and intent on restoring a “Greater Russia” whether the peoples of the nations he seeks to annex and rule like it or not.

And that’s despite the fact that Russia lost 20 million people after World War II and was itself invaded by Germany, was a founding member of the United Nations and, in founding the organization, subscribed to a fundamental principle that prohibits member states from “using force” against the territorial integrity or political independence of any state.”

The brutal invasion of Ukraine initiated and directed by Putin is a blatant violation of this principle.

At our synagogue, a Welcome Circle working with the Hebrew Immigrant Aid Society escorted a Ukrainian family to the safety of the United States. They are not Jews; they are Ukrainian Orthodox.

The family consists of a 37-year-old mother, Viktoriia, and her two sons, 15-year-old Yaroslav and 10-year-old Nikita. They live in a house in Sag Harbor that a community has made available to them. The boys are happily enrolled in Sag Harbor schools.

Ron Klausner, the synagogue’s co-president, recounted the scene at Kennedy Airport: “We welcomed them into our outstretched arms and we all cried with relief. Her luggage – life savings – consisted of a medium and a carry-on, two guitars, three small backpacks, a small dog and a cat. They wore their only clothes.”

The family comes from a town in the Donetsk region in eastern Ukraine. The Russians invaded it in 2014 and have been besieging it ever since. Viktoriia’s parents stay in a town still occupied by Russian soldiers.

Klausner recounted that “Viktorija escaped with her sons (and their dog and cat) and made it from Slovyansk to Piensk, Poland, and then, after connecting with us via HIAS, to Posnan, Poland, Berlin and finally to travel to Frankfurt Board the plane to the United States. It wasn’t the same as boarding a ship steerage to cross the Atlantic like so many of our ancestors did, but the journey was long, grueling and traumatic nonetheless.”

“Thanks to a very generous donor, the family is now living in a fully furnished home in the village of Sag Harbor until spring. You can easily walk to town, school, shopping, the beach, library and grocery store. The house is a dream for her. The family started crying when they first entered the house… after living in a mold-infested basement in Poland,” Klausner said. “One of the core values ​​of our faith is to welcome the stranger among us, just as we were once strangers in a new land. I can tell you that every member of the Welcome Circle was moved to tears by the courage of this family and the awareness of the life-changing impact of our actions.”

At the invitation of Dr. Alexey Yablokov, environmental adviser to Russian Presidents Gorbachev and Yeltsin, I have traveled to Russia seven times to lecture on environmental and energy issues across the vast nation.

Yablokov, who died in 2017, was considered the father of the environmental movement in Russia and the country’s most important environmental scientist.

My last trip to Russia was in 2002. I gave the keynote address at a conference in Tomsk, Siberia, and also gave a presentation at Tomsk Polytechnic University. Putin was in power for three years and already things were changing. like dr Yablokov stated in 1999: “The result of Putin’s policies is fascism.”

Under no circumstances would I return to Russia now that Putin has hijacked the country. The last time the Delta jet was half an hour from Moscow en route to New York, I breathed a sigh of relief to be outside Russian airspace.

Putin and his vicious, illegal war must be stopped. What he is doing and the resulting devastation is indeed causing untold suffering.