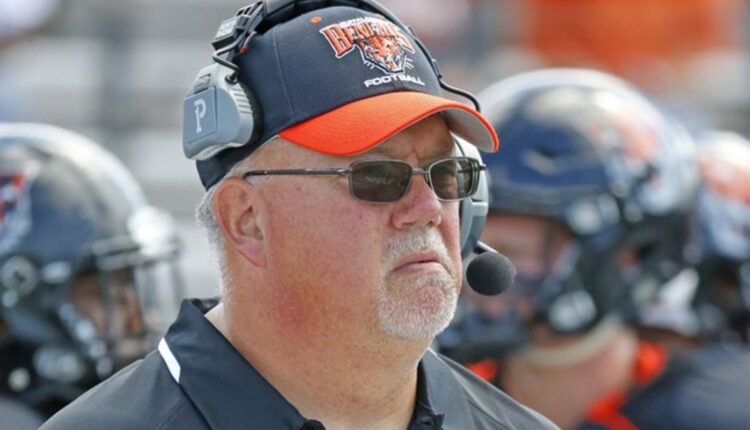 At the end of the summer, SUNY Buffalo State’s football team will be without a familiar face as associate coach Terry Bitka has announced his retirement.

Bitka has spent the past 36 seasons coaching Bengals football and has decided it is time to move on and focus on his family.

Son Ryan, an Amherst High graduate, is a junior offensive lineman at Cortland, and Bitka wants to be able to enjoy the remainder of his son’s career in person.

One game in particular Bitka is excited to attend is Nov. 16 at Yankee Stadium, for the 2022 Cortaca Jug game between Ithaca College and Cortland, a rivalry that dates to 1930.

Ryan Bitka saluted his dad on social media this week. “Always loved being on campus with you and the team growing up,” he said. “You’ve taught me so much and I know there is still more to learn. Congrats on an amazing coaching career Dad!! Can’t wait to have you in the right colors again.”

Terry Bitka graduated from Cortland in 1986. Daughter Emily is an assistant coach of the Cortland women’s lacrosse team. Son Brandon is a graduate assistant in the athletics department at Hilbert College.

“Family is the first priority,” Terry said. “It’s an opportunity for me to be a dad.”

For Bitka to decide it was time to follow the advice he has given countless student-athletes took some thinking. After the season ended is when the thought initially crept in, but he was torn. He enjoys coaching the offensive line and wanted to work with first-year head coach Lazarus Morgan.

In early July, he made the decision and sent the school a letter last week to announce his intentions. He said he is at peace with his decision because it gives him an opportunity to move, be with his family and explore things he wasn’t able to do because of the demands of his job.

The next phase is emptying out his office, which he jokingly said will require throwing away some things because he is a self-described “football hoarder.” Having coached for almost four decades, he has an office filled with reminders of great moments. Like on Sept. 15, 2012, when the team traveled to Whitewater, Wis., to face no. 1 ranked Wisconsin-Whitewater. At the time, the Warhawks were the three-time defending Division III champions and on a 46-game winning streak.

It was the third game of the season for the unranked Bengals. They gave the champions a tough outing and ended up with a stunning 7-6 victory.

“The biggest victory in school history,” Bitka said. “I take a great deal of pride in that one. We went up to Wisconsin and came away with a huge, monumental win there.”

In all, Bitka has been part of 156 of the program’s 175 all-time victories, arriving in the seventh season of the program in 1986. He spent six years as part-time assistant with the offensive line and became a full-time assistant in 1992. He was promoted to associate head coach in 1998 and was named defensive coordinator in 1999.

“Coach Bitka is part of what has made Buffalo State such a special place for so many years,” Director of Athletics Renee Carlineo said in a news release. “He has touched the lives of hundreds of young men and still maintains so many of those connections and friendships today. Terry came to Buffalo State as a young coach and leaves an impression here that will still be felt for generations.”

Buffalo State football has had its good and tough moments, and Bitka believes the program is due for a resurgence after going 0-10 in 2021, the only winless season in program history.

“I know success can take place at Buffalo State because I’ve been a part of it,” Bitka said. “It may take a couple of years, but Buff State will be back on track.”

With a lifespan of memories, the wins and losses take a backseat for Bitka when he looks at the big picture: helping young men become mature and ready for the world, seeing them blossom into adults, and their personal and professional successes. It can be difficult to stay in touch with people, but he said he is appreciative of Facebook to help keep him connected with people.

“The biggest thing I take with me is some of the wins were fantastic and some of the losses have been heartbreaking, but man, I’m so proud to see where some of our players are now,” Bitka said. “We’ve got guys out there that are leaders in their communities, fantastic husbands and fathers, and involved with their kids.”