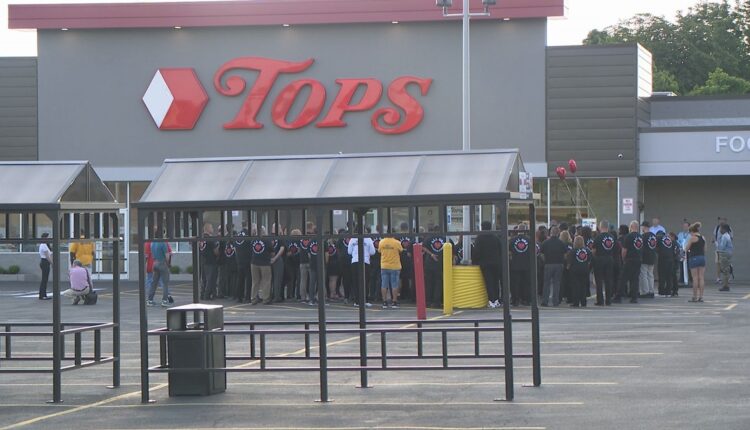 BUFFALO, NY — Friday morning, the Tops Market on Jefferson Avenue reopened its doors for the first time since the deadly May 14th shooting.

The store has seen a re-design to help customers feel comfortable.

Tops on Jefferson Ave officially reopened at 7:45 am

Employees gathered for a blessing of the store before walking back into Tops for an emotional reunion.

“Looking in the eyes of the Tops employees, you could still see the sadness. You can see some of the employees are happy to return,” said LaCandice Durham.

Of the 90 employees who work at Tops, 2 On Your Side is told nearly 50 returned to work. Officials at the grocery store say when the employees walked in, many of them were in tears.

As the East Buffalo tries to heal from a racist gunman’s lasting effects on their community, some held a prayer service for victims while others like Duraham are finding ways to show support to all with a sign and balloons as people returned.

“Tops employees, they do not have to return. They could’ve chosen to work at other Tops, they could’ve chose to work anywhere else. Many of the customers have nowhere else to shop,” Durham said. “I want to be here and invite others to come here to let them know you’re not alone. We’re with you, we’re in this together. Buffalo strong.”

It was a soft opening for the store with renovations including a facelift for the exterior of the building as well as the inside.

There’s also additional security and an emergency evacuation alarm system — the first ever for a grocery store.

Once Tops did reopen, officials say the first two shoppers asked for job applications before they left.

Meanwhile, some Buffalonians struggled to step foot inside.

“I haven’t been in myself yet,” Durham said. But I’m out here and being out here like right here, welcoming people as they go in, that’s very important to me. I will go in at my time. I don’t think today.”

There is counseling on-site for the community. That will be here through at least Monday. Counseling for employees will be ongoing.

California’s Public Health Tax Is Dead for the Year