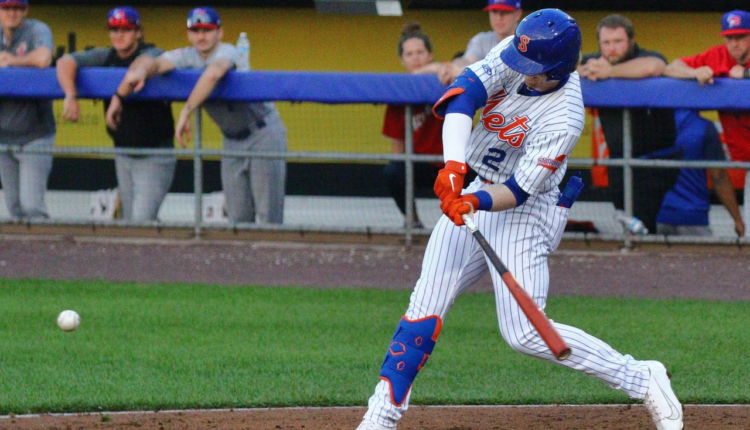 Syracuse, NY – The Syracuse Mets were doomed by a bad beginning and a tough end to the game on Wednesday night, allowing six runs in the first three innings and four runs in the ninth inning on their way to a 10-3 loss to the Buffalo Bisons at NBT Bank Stadium. The Bisons have now won the first two games in the six-game series.

Buffalo (56-50) came out of the gates swinging, scoring four times on five hits in the top of the first. Chavez Young and Vinny Capra doubled and singled to start the game respectively, putting runners on first and third with nobody out. David Peterson then struck out Nathan Lukes to briefly take the pressure off, but things promptly unraveled on Syracuse’s left-handed starting pitcher. Cullen Large brought home a run via an RBI groundout. Then, Rafael Lantigua had an RBI single, Logan Warmoth collected an RBI single, Lantigua stole home, and Nick Podkul capped the inning with an RBI single to give the Bisons a 4-0 advantage.

Buffalo did it again in the top of the third, plating two more runs in powerful fashion. Large doubled with one out, followed by a two-out, two-run home run from Warmoth later in the inning to make it 6-0 Bisons in a flash. By the end of the night, Warmoth would finish 3-for-4 at the plate, a triple shy of the cycle.

From there, the spotlight belonged to Buffalo’s starting pitcher, Thomas Hatch. The right-hander from Oklahoma was masterful, allowing just one hit in five and one-thirds scoreless innings with two walks and four strikeouts. Hatch has completely confused the Mets so far this season. In three starts, he has yet to allow a run against Syracuse in 16 and one-third innings with just five hits allowed and 15 strikeouts in the process.

Syracuse (47-60) would briefly give the home crowd hope of a late, dramatic comeback. Trailing, 6-0, entering the bottom of the seventh inning, the Mets loaded up the bases with nobody out via a Daniel Palka single, a Mark Vientos walk, and a Brett Baty single. From there, the inning fizzled out. Gosuke Katoh struck out, JT Riddle grounded into a fielder’s choice, and Terrance Gore struck out. Riddle’s fielder’s choice did allow Palka to cross home plate and make it 6-1.

Nate Fisher, on a disappointing night for the Mets, provided a pitching highlight. The left-hander tossed four scoreless innings out of the bullpen on just three hits with two strikeouts. Fisher, a normal starter who has made ten starts in 11 appearances for Syracuse before Wednesday night’s game, has been a very reliable piece of the Mets pitching staff as of late. In his last four outings since July 23rd, the former Nebraska Cornhusker has allowed just three earned runs in 12 and two-thirds innings, good for an ERA of 2.21.

Buffalo put the game away in the top of the ninth, scoring four runs on four hits to balloon their lead to 10-1. Nathan Lukes, Rafael Lantigua, and Nick Podkul all provided RBI singles in the frame as the Bisons sent nine men to the plate. By the end of the game, six different bisons had scored runs and every single starter reached base at least once. Seven different Buffalo players reached base at least twice and all but one player had at least one hit.

Syracuse did find a little solace in the bottom of the ninth as two top Mets prospects combined to bring a run home. With one out, Mark Vientos doubled down the right-field line to put a runner in scoring position. Brett Baty promptly brought him home with a sharp single off the base of the left-field wall. Baty, the 12th overall pick in the 2019 draft by the Mets out of Lake Travis High School in Texas, went 2-for-4 on Wednesday night with a pair of sharply hit singles. Baty later scored Syracuse’s final run of the night, crossing home plate on an RBI single from Gore to make it 10-3.

Syracuse continues its six-game series against Buffalo on Thursday with the third game of the series. Right-hander Connor Gray is scheduled to start the game for the Mets. First pitch is slated for 6:35 pm

Social Media Posts Criticize the 988 Suicide Hotline for Calling Police. Here’s What You Need to Know.