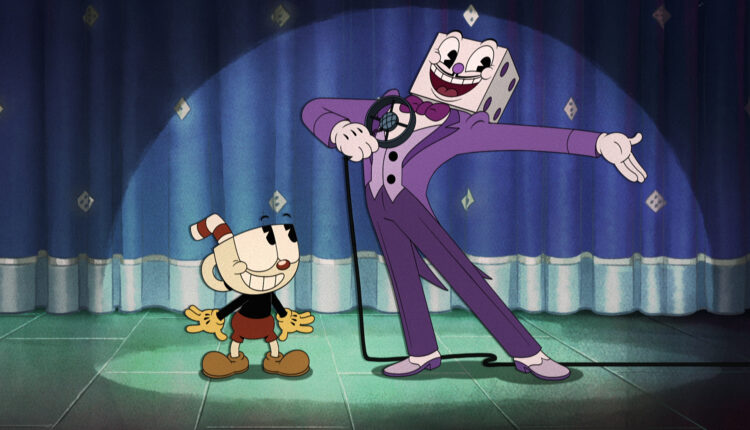 Cuphead Rolls the Dice With First-Looks at Never Before Seen Content Premiering on Twitch, Twitter and YouTube Ahead of August Drop of New “The Cuphead Show!” episodes

August 5, 2022 – Global gaming phenomenon Cuphead is celebrating a year of massive success, from the debut of the acclaimed series The Cuphead Show! in February, to the June 30 release of the highly-anticipated video game expansion Cuphead: The Delicious Last Course — which has already reached platinum status. Studio MDHR’s eight-time platinum-selling video game continues to be a fan favorite! Ahead of new episodes dropping later in August, fans can tune in tonight at for a special, interactive, social gaming experience, executed by the creative agency GLOW, where viewers around the world will have their Cuphead knowledge tested and be given exclusive access to never before seen content from drop 2 of The Cuphead Show!.

Since The Cuphead Show! Debuted in February, the animated adaptation of the award-winning video game has received high praise for its stunning designs and classic animation art style. The Cuphead Show! is executive produced by Dave Wasson, Chad Moldenhauer, Jared Moldenhauer, and CJ Kettler, with Cosmo Segurson serving as co-executive producer. Due to the massive success and popularity of the first drop of The Cuphead Show!, Cuphead, Mugman and the Inkwell Isles crew will be returning to Netflix with new episodes and more misadventures on August 19th.

What: The @cupheadshow social accounts have been buzzing all week building up to a multi-platform, livestream event this evening. Fans can tune in online tonight at 5pm ET / 2pm PT for an interactive, social gaming experience, where viewers around the world will have their show knowledge tested and be given exclusive access to never-before-seen content from drop 2 of The Cuphead Show !. The engaging and interactive livestream, called “The Cuphead Show! presents: Roll The Dice,” was made available to fans through a ‘flock to unlock’ call to action on the show’s social channels, where the character, Stickler, implored fans to help him restore The Devil’s records in order to return the “Roll the Dice” game show to the air. During this evening’s livestream, fans can crowdsource answers in their respective chats to drive outcomes in the game through challenges like ‘Name That Tune’, rounds of Trivia, and ‘Roll the Dice.’ Players will then be sent to a mystery prize room where exclusive prizes await!

Cuphead is celebrated by fans around the world for its arcade-action gameplay, highly original art design and award-winning soundtrack, featuring almost three hours of original jazz, early big band and ragtime music. A true cultural phenomenon, the game has sold millions of units worldwide and won over 20 major awards.

Studio MDHR is a Canadian independent video game company founded by brothers Chad and Jared Moldenhauer. Working remotely with a team across North America, Studio MDHR launched Cuphead on Xbox One and PC to commercial and critical acclaim. Cuphead centers around plucky brothers Cuphead and Mugman in their quest to pay back their debt to the Devil. Across the strange world of the Inkwell Isles, players battle massive, screen-filling bosses, acquire new weapons and discover hidden secrets in single-player or local co-op. Inspired by a mixture of classic run-and-gun action video games and cartoons of the 1930s, Cuphead’s visuals and audio are painstakingly created with the same techniques of the era: traditional hand-drawn cel animation, watercolor backgrounds and original jazz recordings. The game launched on Xbox, Windows 10 PC, Steam and GOG, and has since come to Nintendo Switch and PS4.

King Features is a premier producer and distributor of the world’s most iconic intellectual properties and a leader in classic character licensing and franchise development. With one of the longest-running consumer products programs in the industry, King Features’ portfolio includes world-renowned pop culture brands such as Popeye®, Cuphead, Flash Gordon™, The Phantom™, Hägar the Horrible, Moomin, Prince Valiant® and Mandrake the Magician. King Features produced The Cuphead Show! with Netflix Animation, which is currently airing on Netflix. As content syndication specialists, the company distributes beloved comics such as Blondie, Beetle Bailey®, Mutts™ and dozens of others as well as columns, editorial cartoons and puzzles across multiple platforms and content providers around the globe. King Features is part of Hearst Newspapers, which publishes 24 dailies and 52 weeks, including the Houston Chronicle, San Francisco Chronicle and Times Union (Albany, New York), and operates local digital marketing services and directories.

AFi founder and Editor-In-Chief Daniel “Julius Marx” Pickett has been around toys his whole life. The first line he ever collected was Mego’s World’s Greatest Super Heroes line back in the 70s. He has been surrounded by collectables ever since. In 1999 he was confounded by a lack of information and news about some of his favorite toy lines he was collecting. Since he couldn’t find the information he decided to pursue it himself thinking other people might also be interested in the same news. He started writing a weekly column on the toy industry and action figure for a toy news site and in a years time he tripled the sites daily traffic with his updates, reviews and product features. He built relationships with every major toy manufacturer and many sculptors, painters and mold makers. He grew his hobby into a world wide expertise that the industry has embraced. In 2004 he teamed up with his toy buddy Jason “ToyOtter” Geyer and they created their own website www.ActionFigureInsider.com. Daniel has been quoted in both industry and mass media press outlets. Over the years Daniel and AFi have been sought out as experts in the field. Daniel was regularly featured on “Attack of the Show” on the G4 network as the primary contributor to their “Mint On Card” segment, and our front page has been linked to from USA Today’s “Pop Candy” Blog twice. Daniel’s content has also been featured on Bloomberg News, MSNBC.com, Time.com, The Wall Street Journal, The Saturday Evening Post, CNN.com, AssociatedPress.com Wired.com, Fark.com, Boing-Boing, Gizmodo.com , Ain’t It Cool News, the Official Star Wars blog, Geekologie, G4, CNet and Toy Fare magazine, among many others. He has consulted on toy lines, books, documentaries and TV shows. But all of that really just sounds snooty and “tootin’ his own horn” – the long and short of it is that Daniel loves toys and he LOVES talking about them.