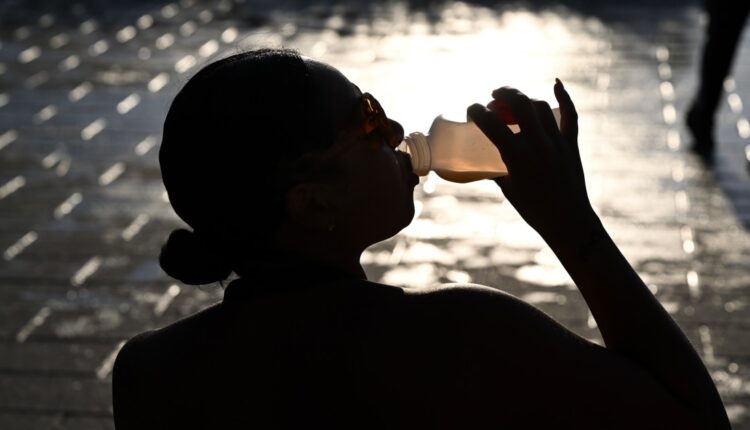 At least 73 million people were under heat alerts Thursday as high temperatures were expected to expand into the Northeast and New England.

Temperatures were forecast to soar into the upper 90s from the Mid-Atlantic to Maine on Thursday in what was forecast to be the hottest day of the week.

If Albany hits 97 F degrees or higher, it would be the city’s hottest day in a decade.

The heat combined with high humidity will lead to dangerous heat index values ​​of 95-105. New York City’s heat index was forecast to rise to the century mark, with Philadelphia and Washington, DC, both expecting to feel like 102.

Friday should be another hot day, although a few degrees cooler than Thursday, before slightly cooler temperatures arrive for the weekend.

Some of the Plains states were also expected to bake under blistering temperatures that could climb into the triple digits in what has been a relentless stretch of 100-degree days.

Drought conditions also continue to worsen, which can drive temperatures even higher.

As of Wednesday, Dallas had experienced 61 straight days with no rain, the second-longest dry streak on record. With no rain on the horizon, temperatures have already soared past the 100-degree mark 39 days so far this year. The average is 22 days a year.

The heat in the region should persist into the weekend. Other locations, like Oklahoma City, are forecast to have heat index values ​​of up to 107 degrees. At those temperatures, heat exhaustion can overtake anyone spending a prolonged amount of time in the sun, with a high risk of heat stroke.

The heat and humidity can also fuel thunderstorms capable of high winds, hail and flash flooding. Thunderstorms were expected Thursday afternoon from northern Tennessee up through the Ohio River Valley and into interior parts of the Northeast and New England.

Up to 3 to 4 inches of rain could fall in areas experiencing repeated rounds of rain with higher amounts possible in some locations.

As a cold front shifts east Friday, the risk of soaking rain and strong thunderstorms will move into the Mid-Atlantic and Appalachian regions. Flash flooding will be possible, especially across urban areas and the mountains.

Climate change is bringing more frequent and intense heat waves by raising the baseline of temperatures. According to Climate Central, 74% of the United States is experiencing longer heat waves compared to 50 years ago.

Kathryn Prociv is a senior meteorologist and producer for NBC News.

Do ‘bouncing universes’ have a beginning?