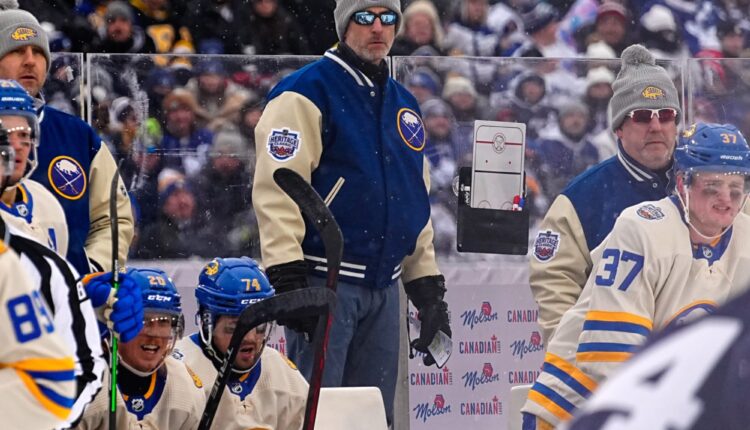 Terry and Kim Pegula bought the Buffalo Sabers in February 2011, and I am not going to spend much time rehashing the hash: They have been among the NHL’s least relevant franchises. Since the Pegulas purchased the franchise, the Sabers have gone through the following coaches:

That’s seven coaches, none of whom have lasted over two years with the club. Enter Don Granato, who has the opportunity to break the Curse of the Pegulas. Perhaps a better opportunity than any other coach on this list.

And if you want my bold prediction, it is that Granato is going to break the curse. Why? Let’s talk about it.

SUNRISE, FL – APRIL 8: Head coach Don Granato of the Buffalo Sabers directs the players during the second period against the Florida Panthers at the FLA Live Arena on April 8, 2022 in Sunrise, Florida. (Photo by Joel Auerbach/Getty Images)

3 reasons Buffalo Sabers head coach Don Granato is in the perfect position to break the Curse of the Pegulas in 2022-23. Reason #1: Late-season performances

So far, Granato has a record of 41-55-14 in 110 games. If he lasts until his 165th game, he will have set a new record for games coached during the Pegula era. And so far, Granato’s Buffalo Sabers have gone nowhere but up, even if they missed out on the playoffs for the 11th straight season.

But let’s go back to March 2021, when the Sabers fired Ralph Krueger amidst a 17-game losing streak. It’s safe to say the franchise was teetering on collapse and yet another complete rebuild for what was literally the seventh time over the past 10 seasons. The streak ended on March 31st and Granato led the Sabers to an 8-11-2 (18 points) finish in April and May. Not bad, considering the team was 7-23-5 (19 points) from January to March 31st.

Then last season happened when a healthy Sabers team jumped out to a 5-2-1 start before injuries and COVID reared their ugly heads. But once again, the Sabers bounced back to a 16-9-3 record in March and April 2022.

And they didn’t just bounce back, but players like Rasmus Dahlin, Tage Thompson, and Jeff Skinner became household names. Skinner really had a bounce back season. Jack Eichel, Sam Reinhart, and Rasmus Ristolainen were in other cities, and the likes of Alex Tuch and Peyton Krebs became regular forces on the Sabers roster.

Granato took his experience and crack for developing players, applied what he learned, and turned the Sabers into a team worth watching in 2021-22. At least when the team was healthy, like in October, March, and April – combined record 21-11-4 (46 points).

Jake Paul PPV Off Due To Hasim Rahman Weight Issues