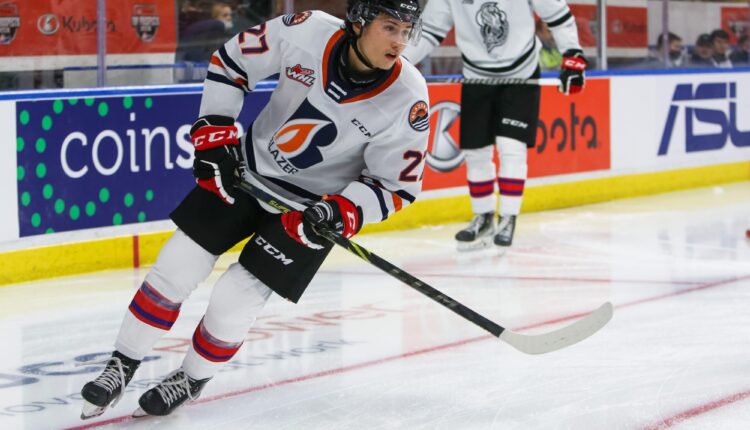 The Buffalo Sabers have a rich prospect pool that goes beyond the AHL. Here are three junior hockey prospects to watch in 2022-23.

The Buffalo Sabers faithful have got to be excited about the organization’s prospect pool, and it goes far beyond the scope of the AHL. So today, I wanted to touch on three junior hockey prospects who may just see themselves playing at the AHL level when they turn 20.

These three stood out at the team’s development camp last week, which is another positive sign. Expect this golden trio listed below to make numerous strides in with their respective junior hockey team this season and they might just see themselves in the red and blue in the future.

KITCHENER, ONTARIO – MARCH 04: Josh Bloom #17 of the Saginaw Spirits skates against the Kitchener Rangers during the second period at Kitchener Memorial Auditorium on March 04, 2022 in Kitchener, Ontario. (Photo by Chris Tanouye/Getty Images)

Bloom also signed with the Buffalo Sabers last season and practiced with the Rochester Americans on a tryout basis: Note that the NHL has an agreement in place with the CHL that prohibits the latter’s players from joining the AHL until they turn 20, so the tryout contract made for a good consolation.

Both his experience practicing with the Americans plus playing around established talent at last week’s development camp allowed Bloom to get a taste of what the game looks like beyond the junior level. Bloom was also selected to attend Team Canada’s National Junior Team Summer Camp, which begins on Saturday, July 23rd and runs through Wednesday, July 27th.

This season, Bloom expect to remain in a leadership role with the OHL’s Saginaw Spirit and build upon his success from last season. Fans can expect the big-bodied Bloom to continue to honor his specialty of applying pressure and making plays on the penalty kill. He is a complete player that, despite carrying a larger frame, also possesses a healthy dose of speed.