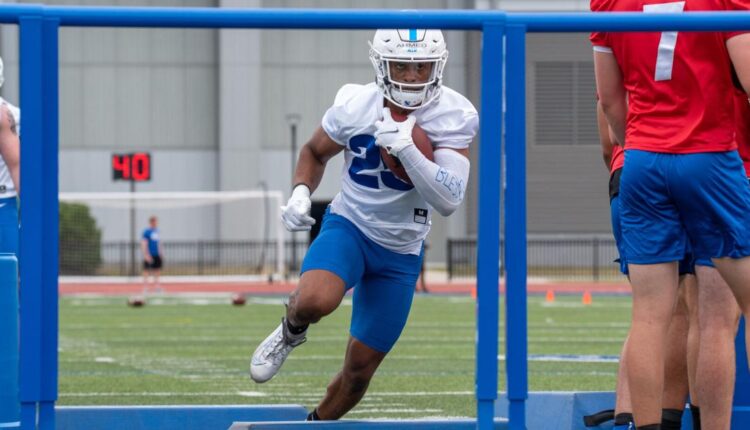 BUFFALO — Tajay Ahmed was bred to play football for the University at Buffalo.

Ahmed’s father, Chaz, played for the Bulls from 1987-1990 and his son wanted to follow. Even when Ahmed played EA Sports’ NCAA Football video game series, he didn’t play with Alabama or Notre Dame or Texas, he played with Buffalo.

Coming out of Starpoint High School, Ahmed wanted a scholarship and wanted to play Division I football. He even spent one year at Canada Prep Academy to make it happen. The scholarship didn’t come, but he walked-on at Buffalo in 2019.

Ahmed appeared in eight games during his first two seasons, with his only carry ending in a 44-yard touchdown. But he found a niche on special teams, playing in 10 games last fall.

During the spring game on April 30, Buffalo head coach Maurice Linguist stopped play and awarded Ahmed a full scholarship in an emotional display that included his parents.

When practice officially opened the 2022 season Thursday, Ahmed’s first season commenced as a scholarship player. To decipher his feelings, one only needed to catch a glimpse of the white sleeve on his left arm, which had “Blessed” scribbled in blue.

Linguist is quick to point out Ahmed’s scholarship was earned and not given when the topic arises. He says Ahmed “chops wood and carries water,” or more simplistically, he shows up each day with the same enthusiasm.

Ahmed said he wouldn’t change anything about his path to a scholarship and it likely wouldn’t have come if his desire to earn a scholarship wasn’t rooted in a genuine love for football. Arriving on campus without a scholarship was even a deterrent, he believed it would eventually happen.

No longer the most dominant player on the practice field, Ahmed’s enthusiasm makes him stand apart. He moves through drills at the same speed he would during a game.

“The passion that he has drips out of his skin every single day,” Linguist said. “It pours into the locker room. He just sets the tone and the example. He’s just a hard worker and he loves it. It allows the health and culture of the locker room to rally around him.”

Ahmed’s statistics as a running back have not been a rallying point at Buffalo, amassing 86 yards and two touchdowns on seven attempts during his career. But his versatility made him a dynamic special teams player.

“You can change the game with one play,” Ahmed said. “When I’m running down on kickoffs, I have a chance to force a fumble and get the ball game. If I have to block, I can get my man and set up a score.”

Although Ahmed ran for more than 800 yards and 10 touchdowns as a senior at Starpoint, his best position may have been linebacker, having started since his freshman campaign. He also returned kicks and even played quarterback during a 2015 game against Lockport after two players were injured, throwing a game-winning touchdown pass with 10 seconds remaining.

At 6-foot-1, 190 pounds, Ahmed didn’t have the size to be a Division I linebacker, but his skills at each position made him an ideal special teams player. His ability to shed blocks and weave through traffic, along with an intelligence to take proper angles earned him a role.

Buffalo’s Tajay Ahmed (25) attempts to knock teammate Al-Jay Henderson (22) off course during a special teams drill on the first day of practice Thursday at UB Stadium.

Inevitably, Ahmed’s football career will come to an end. But the senior academic all-MAC business major says he will worry about that later. Now he is focused on pursuing wins this season and enjoying being a scholarship player.

“When you look at life in all aspects, if you love something, you’re going to go a little bit harder than someone who doesn’t really love it,” Ahmed said. “Love is the reason for the fight.”

Will There Be Free Samples at the North East Cannabis Convention?