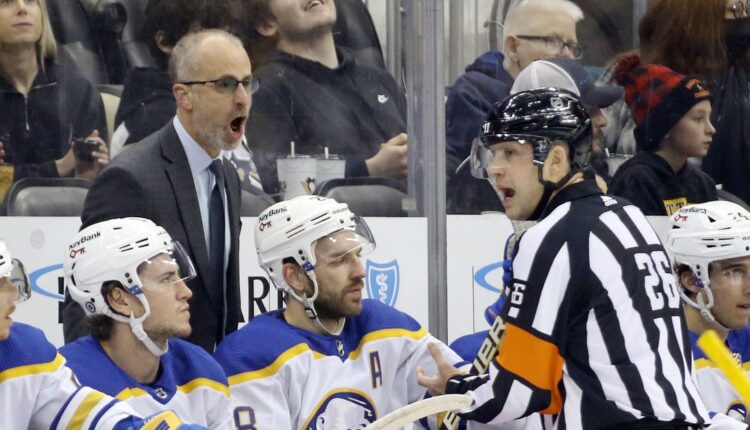 This past week, Die by the Blade Twitter asked you, the fans and followers, what content you would be interested in during the final few months of the offseason. While more information on the coaching staff as a whole was requested (we will get to them later, do not fret!), it is important to spotlight the main man behind the improvement – albeit a slow climb – of the Sabres. Yes, they missed the playoffs yet again, but it would be dense to say that they did not show signs of hope during the 2021-2022 season, especially that second half. Following a tumultuous few years with some very poor coaching choices by the organization, it seems the Sabers have finally found a competent leader behind the bench, but…who is Don Granato?

Unlike his predecessor, Granato has an extensive background in both playing and coaching hockey, which assumedly stems from his family’s passion for the sport early on. As one of three kids – all of which now have impressive careers in hockey – Granato used to run coaching drills in his basement with his siblings and look to Wayne Gretzky for inspiration. It was very clear early on that the now 54-year-old had the right mentality and knowledge of the sport to motivate a team one day.

As they all grew up, hockey stuck with each of them in various ways. His sister Cammi was not only one of the first women inducted into the Hockey Hall of Fame in 2010, she also earned an Olympic gold medal as the captain of the US team in 1998 and then a silver medal in 2002. She is currently the assistant general manager of the Vancouver Canucks. His brother Tony has had considerable experience playing (for the Rangers, Kings, and Sharks, respectively) as well as coaching in the NHL. In 2018, Tony served as the head coach of the US men’s hockey team in the Olympics. He currently works as the head coach at the University of Wisconsin.

Though he did have a few brief stints playing for both the USHL and the ECHL, it seems Don was always destined to be a coach in some capacity when he hung up his skates in 1993 after playing just a few years. Since then, he has held various roles as either an assistant or head coach in the aforementioned leagues as well as the AHL. During his time coaching in the AHL, Granato won the Louis AR Pieri Memorial Award as outstanding head coach of the Worcester IceCats – during his first year with the club – after racking up an impressive 108 points on the season.

Before all of these endeavors led him to the Sabres, Granato also had to overcome quite a bit of adversity with his physical health to get where he is today. As many fans may remember, he fell very ill with pneumonia in 2019, which was hospitalized, and quite frankly not expected to live. Prior to that health scare, he battled Hodgkin’s lymphoma in 2005 while coaching the IceCats.

Health aside, let’s not forget Granato was provided a huge undertaking following the release of former head coach Ralph Krueger: coaching a team that has been tanking for nearly a decade and doing so during a worldwide pandemic. Sounds easy, right? Through all of this, it felt right to have him behind the bench. And, while his numbers are not all that impressive to tired, restless fans yet, there is hope for a future that includes Jack Quinn and Owen Power in the equation.

Though Donnie Meatballs has only been head coach for one complete season, he really does seem like one of the puzzle pieces that has been missing to get this team back on track and, honestly, is just so likeable. His first concert was Elvis Presley and first job was washing beer trucks. The man is already a legend.

For more fun facts, do yourself a favor and watch this video:

Emilie Kouatchou’s historic lead in “Phantom of the Opera”