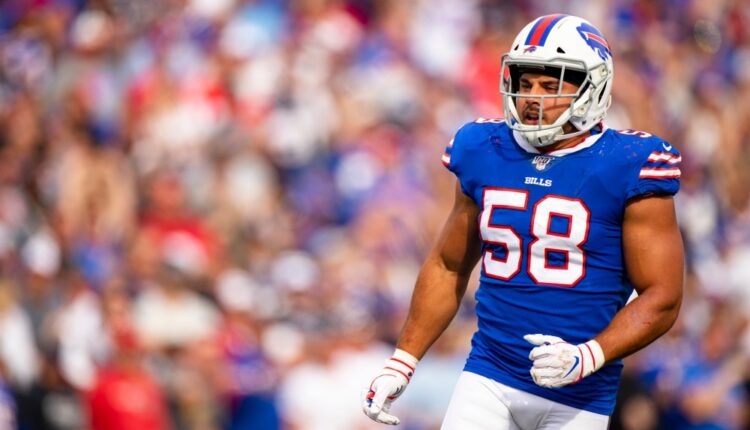 As we truck along in my positional rankings, the linebackers are up to bat this week. The NFL is shifting from the traditional run-stuffing linebackers to those who are athletic and can defend both the run and pass. Some teams, like the Bills, only use two LBs as part of their nickel defense. Other teams use three linebackers (4-3), while others use four (3-4). Due to the many different types of linebackers in our league today, I have included almost 20 additional names (not ranked) before we get into the top 10.

All five of these players finished as top-10 tacklers last season, recording at least 142 total tackles. Oloukun led the NFL with 192 tackles as a member of the Falcons, Brooks was second (184), and Perryman was sixth (154). Kyzir White was eighth (144 tackles) for the Chargers after nearly doubling his 2020 production (77). Meanwhile, Holcomb was tenth in the NFL with 142 tackles.

Each of these LBs present too small of a sample size for me to put them in the top 10. Besides Perryman, who was drafted in 2015, the other four linebackers have each played less than five seasons in the NFL and haven’t put up big numbers until last season.

The reason I’m refraining from ranking them and expanding upon my top-10 list is because these are just based on tackles. If you want to go with some younger players who haven’t put up big numbers yet but present a ton of upside, the following players may be your choice:

If you want to go with some veterans who used to put up big numbers but haven’t as of late, then you might look towards these LBs:

And let’s not forget about the rookies, such as Devin Lloyd (JAX), Quay Walker (GB) and Nakobe Dean (PHI).

So, those are some other names to keep your eyes on for the 2022 season. But here are my top 10 linebackers as of right now.

Matt Milano is one of the most underrated linebackers in the NFL. Before you say anything about me being biased, many reputable sites that I looked at, such as PFF, also had Milano as their 10th or 11th-best LB. However, even though some big publications are showing Milano love, I still think that he is not a big name across the league. There are still a lot of people who don’t know how good and valuable he truly is.

Milano has been the Bills’ best linebacker since being drafted in the fifth round in 2017. The plan was to have Tremaine Edmunds develop into a top-10 linebacker, but here we are talking about Milano in this spot. The 28-year-old uses his athleticism and versatility to be able to do multiple things on the field. Not only can he defend the run, but he is also an excellent cover linebacker, as you can see in this clip from 2018. I know that was a while ago and a lot has changed since then, but I want to bring this play back because it’s a great example of what Milano brings to the Bills defense.

On top of his coverage skills, Milano has made himself into one of the top pass-rushing LBs. He has an 80.6 pass rush grade since 2020, which is the sixth-highest among all linebackers. Milano has finished with 100+ tackles just once in his five-year career. However, like I said in the beginning, the game has changed and Milano is a perfect example of that.

Someone who has racked up a lot of tackles over his career is Lavonte David. David has been a mainstay on the Bucs defense for the past decade, going back to the Josh Freeman days. The former second-round pick has recorded 100+ tackles eight times in his 10-year career, including a personal best 147 in 2015. He has also finished with a 76+ PFF grade each of the past five seasons.

David, surprisingly, only has two Second Team All-Pro selections and one Pro Bowl appearance under his belt. His numbers did decrease last year (97 tackles and two sacks in 12 games), but he’s still a reliable veteran and playmaker for Tampa. The Bucs have been waiting for Devin White to take over as their top LB, but the 32-year old David keeps fending him off.

Roquan Smith has been really solid for the Bears since he was drafted eighth overall in 2018. The problem is, the Bears defense, and team as a whole, have played so poorly over the last few years that it has hurt Smith. For example, he was fifth in the league last year with a career-high 163 tackles, but only had a PFF grade of 47.8. He has recorded 100+ tackles each of his four years in the NFL, yet his highest PFF grade is a 67.2. Hopefully, for Smith’s sake, Chicago can start to figure things out. If not, he may force his way out.

#Bears LB Roquan Smith posted a statement (via @RapSheet) that he has requested a trade out of Chicago.

Smith is entering the final year of his rookie contract and has been wanting a new deal, but both sides have been far apart. pic.twitter.com/iGDAWJpwm8

De’Vondre Campbell proved to be a great addition to the Packers defense. Campbell finished the 2021 season seventh in the league in tackles (146), had an 84.7 PFF grade, and was named First Team All-Pro. The 29-year old turned a $2 million bet on himself last year into a five-year, $50 million extension this offseason. Things should only get better for Campbell, who is now supported by Quay Walker on the inside, and Rashan Gary and Preston Smith on the outside. Not to mention their talented defensive line (led by NT Kenny Clark) and secondary (led by CB Jaire Alexander). Watch out for the Green Bay’s defense this year.

One of the most consistent linebackers in the league, Eric Kendricks had one of his best seasons statistically in 2021. He put up a career-high 143 tackles (ninth in the league) and five sacks. PFF wasn’t too kind to Kendricks however, as they gave him a 59.2 grade. (He had an 82.6 in 2020 and a 90.2 in 2019, when he was a Pro Bowler and a First Team All-Pro.) But, similarly to Smith in Chicago, Minnesota finished 30th in total defense, which could’ve factored into his poor PFF grade. Standing at 6’0”, 232 pounds, Kendricks excels in coverage. He had a 73.8 coverage grade last year, which was 10th among linebackers. Furthermore, he’s been one of the NFL’s best coverage LBs since 2019.

People are wondering when Demario Davis is going to regress, but the 33-year old is still playing at an extremely high level. Davis was always a solid linebacker for the Jets and Browns, but his career didn’t really take off until he joined the Saints in 2018. He’s put up 100+ tackles and 3+ sacks every year in New Orleans, and has been an All -Per three out of four seasons there. (He was First Team in ’19, and Second Team in ’20 and ’21.) Davis is an excellent run defender, but has also shown to be a great cover LB as well. Last year, he only allowed 66.7% of the passes in his area to be completed, fifth-best among qualifying linebackers.

One of the best middle linebackers in the league, Fred Warner comes in at number four on my list. He may have dropped off from his First Team All-Pro and Pro Bowl status in 2020, but Warner recorded a career-high 137 combined tackles last season. A 2018 third round pick out of BYU, Warner recorded his fourth-consecutive season with at least 118 tackles. The 25-year old played more snaps in coverage (680) than any other linebacker last year. Despite the high number, Warner had the fourth-highest coverage grade among LBs with a 79.4 PFF grade. The 49ers have produced a top-seven defense by DVOA rankings each of the last three seasons, and Warner is a big reason why. He is the second-highest paid ILB, making just over $19 million per year.

Darius Leonard, who recently requested to be called by his middle name, Shaquille, put together another impressive season for the Colts in 2021. Leonard had 122 tackles, led the NFL with eight forced fumbles, and had the second-best overall run defense grade in the entire league (91.1). It was another First Team All-Pro and Pro Bowl season for Leonard, who seems to have made a habit of that; he’s earned those honors every year he’s been in the league. (The only time he wasn’t a First Team All-Pro was in 2019 when he made the Second Team.) The 27-year old burst onto the scene in 2018, leading the league with 163 tackles and had 12 TFLs, seven sacks , and four forced fumbles. Leonard is the highest paid ILB, as he makes $19.7 million a year.

Many thought Bobby Wagner regressed last year, but the 32-year old recorded a career-high 170 tackles (third in the league), resulting in an All-Pro for the eighth consecutive year (six First Teams and two S, and a Pro Bowler for the eighth straight year as well… Some regression that was.He did have a 71.8 PFF grade, the lowest in his career since 2015. However, Wagner is still a dominant linebacker in this league and will probably get a new jolt of energy this year playing for the LA Rams. In his 10-year career, the future Hall-of-Famer has 1,383 total tackles. He also has 819 solo tackles, which ranks 29th all-time. (Ray Lewis is first with 1,568, while London Fletcher is second with 1,384.) Wagner signed a five-year, $50 million deal with the Rams this offseason, so he should have a good amount of time to keep racking up big numbers.

My number one linebacker for the 2022 season is Micah Parsons. I honestly didn’t know who to put here. Warner is great in coverage while Leonard excels at defending the run, but both saw their numbers slightly decrease last year. Wagner is exceptional, but he too took a small step back last year as he’s on the back half of his career. So that left me with the reigning Defensive Rookie of the Year, the jack-of-all-trades, Swiss Army Knife, Micah Parsons.

The current NFL is all about speed, power, athleticism, and versatility, and that’s exactly what Parsons brings to the table. Out of his 960 defensive snaps last season, 346 came in run defense, 319 as a pass rusher, and 295 in coverage. Parsons can not only play linebacker, but also on the defensive line and as a hybrid defensive back if you need him to. The 23-year old recorded 84 tackles, 20 TFLs, and 13 sacks in his rookie season. He was a First Team All-Pro, a Pro Bowler, and came in second behind Steelers OLB TJ Watt for Defensive Player of the Year.

And the scary thing is… Parsons is only going to get better.

Stay tuned next week, as I get into ranking the defensive backs!

Woman rescued moments before car is swallowed by sinkhole

Various News: Aubrey Edwards on Getting Blood on Her Shirt During Dynamite, IPWHF Ribbon Cutting Set for This Month