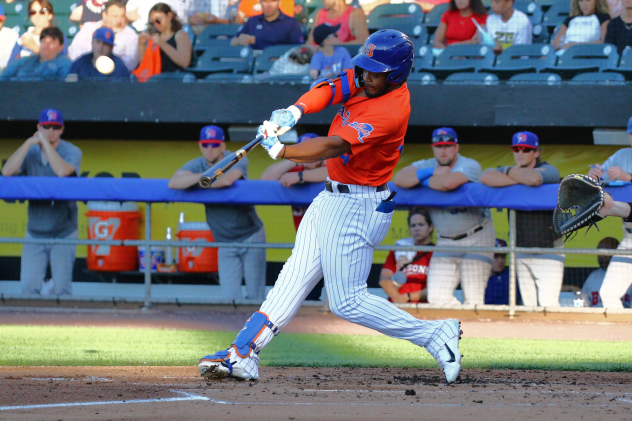 Syracuse, NY – The Syracuse Mets would not be denied on Thursday night, rallying back from two different deficits to take down the Buffalo Bisons, 6-5, at NBT Bank Stadium. The Mets snapped a two-game losing streak in the process.

Syracuse (48-60) got off to an excellent start, plating a run right away in the bottom of the first. Brett Baty reached on an infield single to start the inning, promptly sprinting up to second when Buffalo’s second baseman, Otto Lopez, threw the ball away trying to peg out Baty at first. The next batter, Nick Plummer, punched a single into right field to plate Baty and made it 1-0 Mets in a flash.

From there, Connor Gray settled into a very solid start for Syracuse. The right-hander from St. Bonaventure tossed four scoreless innings to begin the game, allowing just two hits with one walk and two strikeouts. At one point, Gray retired ten consecutive batters.

However, Gray ran into trouble in the top of the fifth. Buffalo (56-51) plated two runs off Gray in the frame to take his first lead of the night at 2-1. First, Rafael Lantigua launched a home run to left field leading off the inning to knot the game up, 1-1. Then, after an LJ Talley groundout, Colton Shaver walked, Chavez Young singled, and Lopez singled to score Shaver and make it 2-1 in favor of the road team.

That lead wouldn’t last at all as Syracuse responded with three runs in the bottom of the fifth to regain the lead at 4-2. The Mets would send eight men to the plate in the fateful fifth. After Michael Perez struck out to start the inning, Syracuse got to work. First, Baty and Plummer singled to put runners on first and second with one out. Then, Mark Vientos crushed a double to the wall in left-center field, plating Baty and Plummer in the process to give the Mets a 3-2 advantage. The next batter, Travis Blankenhorn, pounded a single into right field that scored Vientos and capped the inning’s scoring at 4-2.

This teeter-totter baseball game would swing back in favor of the Bisons in the top of the seventh as it was their turn to score three runs and take a 5-4 lead into the bottom of the seventh. The pivotal play in the inning came on one big blow. With two runners on base and two outs, Vinny Capra was staring down a 3-2 count against RJ Alvarez, the reliever into the ballgame for the Mets who owned a 2.91 ERA on the season entering the evening. However, Capra would get the better of Alvarez this time, taking a hanging breaking ball and sending it over the left-field fence to swoop the Bisons in front by a 5-4 count.

In the bottom of the seventh, Syracuse finally provided the knockout punch, scoring twice to take the lead for good at 6-5. Plummer walked and Vientos singled to start the inning, putting runners on first and second with nobody out. After a Blankenhorn strikeout, Patrick Mazeika was hit by a pitch to load up the bases with one out. Khalil Lee then came to the plate and got the job down, slapping a sharp single into right field to score Plummer and Vientos and give the Mets the lead for good, 6-5. Lee had an excellent night at the plate, going 3-for-4 with three singles.

In the eighth and ninth, Syracuse powered its way to victory via a lights-out relief appearance from Bryce Montes de Oca. The hulking right-handed reliever earned a six-out save, retiring all six batters he faced in order to lock down his seventh save of the season in grand style. Montes de Oca ended the game with a flourish, striking out the side in a perfect ninth inning to give the Mets their first win of the week.

Syracuse is home all week for a six-game series against the Triple-A affiliate of the Toronto Blue Jays, the Buffalo Bisons. Friday night’s game is slated to start at 6:35 pm Jose Butto is scheduled to start the game for the Mets, making his Triple-A debut. Casey Lawrence will oppose him for the Bisons.

Images from this story

• Discuss this story on the International League message board…