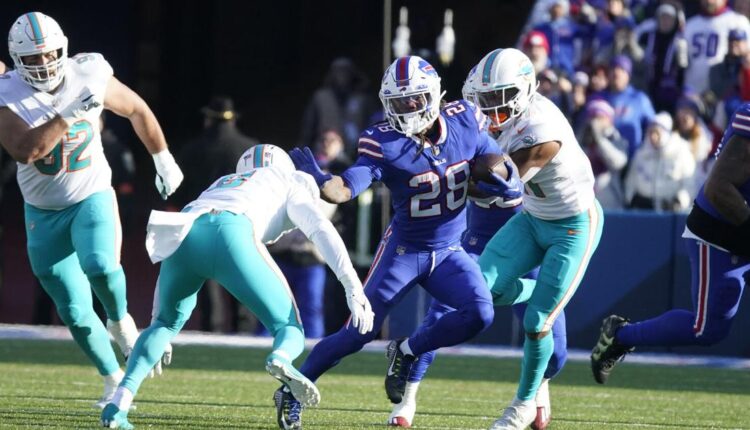 There has been a notable shift in the Buffalo Bills’ offense over the past two weeks.

In each of the last two games, rookie James Cook has picked up more carry on running back than fourth-year veteran Devin Singletary. In Week 18 against New England, Cook rushed nine times for 45 yards compared to Singletary’s seven attempts for 29 yards. Then in an AFC wildcard playoff game against Miami last week, Cook carried 12 carries for 39 yards and a touchdown compared to 10 carries that gave Singletary 48 yards.

That’s significant because up to that point, the only other time Cook had received more carries than singletary was in a Week 2 blowout win over Tennessee.

“I think it’s just that they both play really good football for us and we both have so much faith in them being in the game,” said Bills offense coordinator Ken Dorsey. “Sometimes just the way the rides go dictates some of those things. It’s kind of the luck of the draw whose series it is and stuff like that. Then we sometimes tagged certain people on tracks that just get called up a little bit more than others, but at the same time I think we have a lot of faith in these two guys, that no matter what the situation, we feel very comfortable when one of them is in play.”

Cook has steadily earned a bigger role after a shaky start to his debut pro season. He lost a fumble in the season opener against the Los Angeles Rams, and although he had 11 carries against the Titans the following week, he only managed 10 carries in a single game in Week 11 against Cleveland. From weeks 1 through 10, Cook had 33 transmissions. From Week 11 through the playoff opener, that number rose to 68.

“I think he’s getting more and more comfortable as the season progresses. He’s got that experience and that rep,” Dorsey said. “With the trade (from Zack Moss to Indianapolis) earlier in the year, that gives him more options, so I think it’s a combination of a lot of things. It’s a combination of hard work and empowering himself to be out there more because we trust him. That ranges from the pass protection standpoint, to the run-game standpoint, to the out-in-routes standpoint. I think he did a really good job with that to not only gain our trust, but that of all the guys on offense. He just gets more and more comfortable as the year goes on.”

With the Cincinnati Bengals visiting Highmark Stadium for an AFC divisional round playoff game on Sunday, it remains to be seen how the Bills will split the carries in their biggest game of the season. One thing is certain though – Singletary will handle whatever the coaching staff decides to do just fine.

“Finding ways to add spark to our offense, get us what we need, keep us in the green. It can be good for us, to be honest,” Singletary said of sharing snaps with Cook.

That speaks to the kind of leader Singletary has in the running back room. Even if it gets under his skin, he will support Cook.

“That’s the name of the game, you keep finding ways to get better,” Singletary said. “Stay the course. It won’t always be easy and it may not always go your way, but keep fighting. He did. We’re close, almost brothers I’d say, and he just keeps getting better and better.”

Singletary said he’s noticed Cook taking more notes in meetings – focusing on the little details that are so important at this time of year – and keeping his body fresh as the season progressed.

“He gained a lot of weight,” Singletary said.

As Dorsey mentioned, there are sometimes games that the Bills have in practice with either Singletary or Cook in mind. However, if the game arrives, the other could be in the game at that point. Given how well each of them is prepared for the game plan, Dorsey can be confident he doesn’t have to change anything.

“That’s what I mean by the little details, you might not get that rep in practice but you could be there during the game and you have to be able to perform,” Singletary said. “We succeeded.”