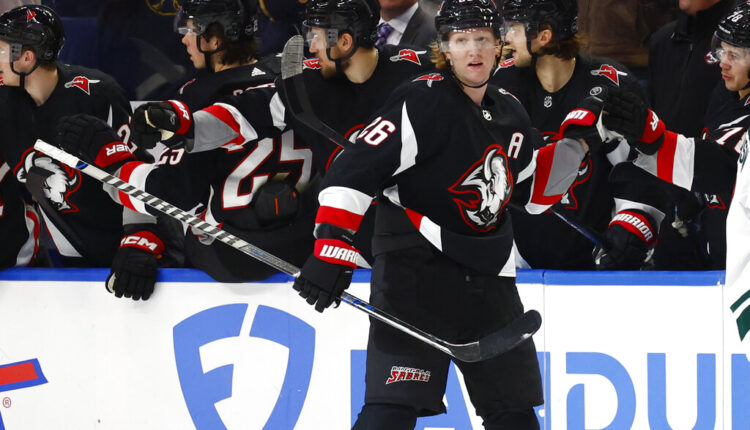 BUFFALO, NY (WIVB) — Rasmus Dahlin accounted for five goals from six for the Sabers in Saturday night’s 6-5 overtime win over the Wild and equaled Phil Housley’s franchise record for points by a defender.

Dahlin scored twice, including the equalizer at 2:35 of the third period, and his third assist came from Victor Olofsson’s winner with 18 seconds left in overtime.

“He was a force,” Sabers coach Don Granato said before noting where fans can vote for Dahlin an NHL All-Star online. “There should be some clicks tonight because that was a special night from him. Watching this unfold was impressive.”

The 22-year-old Dahlin, a last season All-Star, scored his 200th point in his 313th NHL game with an assist on Olofsson’s goal in the first half. As the 12th NHL defenseman to earn 200 points before his 23rd birthday, Dahlin is the Sabers’ second fastest defenseman to reach this milestone. Housley, who was inducted into the Hockey Hall of Fame and coached the Sabers during Dahlin’s rookie season, scored 200 points in his 212th NHL game.

“We’re the same community as the Bills and as we say, One Buffalo,” Dahlin said. “I’m very happy that we were able to win on home and away ice after these things happened. It was kind of emotional going into that game and seeing the jumbotron and stuff like that. But yeah, the fans were incredible. We love playing in this arena. This city is just amazing.”

Dahlin set an NHL record for defensemen by scoring in each of the first five games early in the season. He ranks third among NHL blueliners with 44 points in 36 games after scoring 68 points in his 2021-22 All-Star season. Dahlin’s previous career high was three points in a game. The Sabers are now 11-0-1 this season when he has multiple points.

Dahlin is the eighth active NHL defenseman to score five points in a game.

4 hurt, including child and firefighter, after house fire in Newark