Processing Damar Hamlin’s injury, the league’s reaction and what happens next 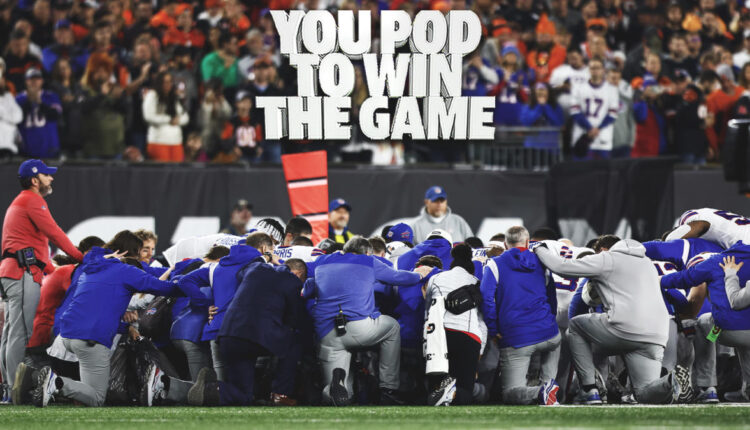 On Monday night, the NFL world was shaken to the core when Buffalo Bills sophomore safety Damar Hamlin went into cardiac arrest following a hit with Cincinnati Bengals WR Tee Higgins. Emergency medical personnel performed CPR on Hamlin at the scene and he was immediately transported to the University of Cincinnati Medical Center, where he has been in critical condition ever since. Shortly after, the game was suspended indefinitely and the NFL later announced it would not resume, if at all, for at least a week.

It was a shocking and sobering moment that left many fearing a national audience could witness the death of an NFL player on the field. Charles Robinson, Charles McDonald and Jori Epstein devote this week’s entire podcast to processing the events of Monday night, Hamlin’s health at the time of this Wednesday night taping, and what the NFL’s plans will be next.

You’re reliving the tumultuous hour that football fans across the country waited in anticipation as answers remained unclear on how Commissioner Roger Goodell and Head of Football Operations Troy Vincent have dealt with this week’s events and what options the league has regarding considering the resumption of play between the Bills and Bengal.

Buffalo Bills players and staff kneel and huddle for the safety of Damar Hamlin, who was seriously injured during Monday night’s game against the Cincinnati Bengals. (Photo by Kevin Sabitus/Getty Images)

• Purchase an All-Juice Team hoodie or t-shirt from BreakingT.com/Terez. All profits directly fund the Terez A. Paylor Scholarship at Howard University.

• Donate directly at give.howard.edu/givenow. Please note under “Tribute” that your gift is in memory of Terez A. Paylor. Under “Description” click on “Other” and enter “Terez A. Paylor Scholarship”.

Watch all episodes of You pod to win the game and the rest of the Yahoo Sports podcast family below https://apple.co/3zEuTQj or at Yahoo Sports Podcasts

Dwight Freeney is a Pro Football Hall of Fame finalist